When the war began, both North and South relied on volunteers. Because both sides expected the war to be short, instead of enlisting their volunteers for the duration of the war, they signed them only to fixed terms. Northern volunteers after Fort Sumter signed up for ninety days, which was just enough time for them to lose disgracefully at Bull Run. Most re-signed, feeling they had something to prove, and Lincoln called for 500,000 more volunteers for a three-year term. Facing the threat of a quick Rebel victory, northerners supported the war effort enthusiastically.

The Confederacy signed its first volunteers for six months. As the months dragged on after their victory at Bull Run, soldiers began to feel that they were more needed at home. When their terms were up, they believed they had done their duty, and left for home.

In the spring of 1862, when the permanent Confederate Congress met for the first time at Richmond, it passed a conscription or draft law. All white men aged 18 to 35 (later 17 to 50) were eligible to be drafted for three years’ service. But the Congress later exempted certain classes of men from the draft. Men in certain professions were exempted, as were — most notably — owners of twenty or more slaves. That exemption was thought necessary to keep the peace, but many poorer whites resented it. Wealthy men who were drafted could also pay substitutes to take their place. The exemptions and substitutions led to charges that the war was “a rich man’s war and a poor man’s fight.”

Many southerners resented the draft in any form. They had, after all, begun fighting to stop a powerful central government from having their way with them, and now they found that they had merely traded one master for another. Zebulon Vance was one of these men, and when he became governor in 1862 he dragged his feet as much as possible in complying with President Jefferson Davis’ conscription orders.

On January 5, 1864, the CSA, desperate for manpower, eliminated exemptions and substitutes and made all white men aged 16 to 65 eligible for the draft. That action prompted this editorial from the Raleigh Standard, arguing against any further conscription. By 1864, many North Carolinians were sick of the war and had little hope that it could be won. This editorial shows that feeling, and makes many of the arguments that southerners had always made against conscription.

The Raleigh Standard, in commenting upon a speech delivered in the rebel Senate by Mr. BROWN, says:

We tell Mr. BROWN, and those who think with him, once for all, that if the desperate revolutionary measures which he advocates shall be attempted to be carried out -- if the civil law is to be trampled under foot by the suspension of the writ of habeas corpus, and every able-bodied man placed in the army from sixteen to sixty-five, -- if no man is to have a hearing before a State Judge, as to the right of the enrolling officer to seize him, and if the rights of the States are to be ignored and swept away by the mere creature of the States; the common Government, the people of North Carolina will take their own affairs into their own hands, and will proceed, in convention assembled, to vindicateBy "vindicate" the author seems to mean protect or defend. their liberties and their privileges. They will not submit to a military despotism. They will not submit to the destruction of their rights, personal and civil, in this or any other war.... Woe to the official character who shall attempt to turn the arms of the Confederate soldiers against the people of this State! North Carolina will not be the slave of either the Congress at Richmond or Washington. She is this day, as she has been from the first, the keystone of the Confederate arch. If that stone should fall, the arch will tumble....

The Raleigh Standard calls attention to the fact that the legislation of the rebel Congress is "controlled by members from Kentucky, Tennessee, Missouri, Arkansas, Louisiana and other places, who impose odious and oppressive laws upon us, which can no more be enforced on the people of the States which they profess to represent, than upon the people of New-York or New-England." It discourses as follows upon this text:

"Is it not an outrage on every principle of free government for men of desperate fortunes, professing to represent other States on whose soil they dare not set their foot, to make and enforce odious and oppressive laws on our people? Are we prepared to submit to this? If not, then let every man arouse himself before it is too late, and denounce these attempts to betray our liberties and place us under a military despotism. Let every man that can speak or write, denounce these outrages on civil liberty until their denunciations are heard and needed in Congress.

But if Congress, in a spirit of desperation, should act the tyrant, and impose such crushing burdens on the people of North Carolina as are insupportable, then they should demand of the Governor that he forthwith convene the Legislature in order to call a State Convention of the sovereign people to take into consideration what is best to be done to relieve our people from the grievous burdens imposed upon them.

If the independence of the Confederacy cannot be achieved by the strength of our population up to forty five years of age, it is clear to any reflecting mind that it will not be done by placing in the army the few left upon whose labor all are dependent for food. Without food our present army must disband, and without food our helpless women and children must perish. Let the people speak out: write to their representatives in Congress: yea. hold meetings, and remonstrate against those iniquitous schemes to enslave and starve us. If you do not, silence will be construed into submission and approval of the chains that Congress are forging for us. We have too long implicitly trusted to such architects of ruin at Wigfall & Co., who are now for placing every man in the army, and all under the control of a Dictator.

Trust them no longer. Remember their fair promises. The dwellers in the garden of Eden, when they listened to the tempting promises of Satan, were not worse deceived and ruined than were the people of the fair, happy, and blooming South when they listened to the fair promises of those arch deceivers, YANCEY, WISE & Co.William Lowndes Yancey was a leading secessionist from Alabama, one of a group known as “Fire-Eaters” because he spoke so strongly in defense of slavery. Former Virginia Governor Henry A. Wise had become a strong secessionist after Lincoln’s election, and raised a private army in the spring of 1861 to march on the federal arsenal at Harper’s Ferry before Virginia had even seceded.

A heretofore contented, prosperous, and happy people were told by them that we must withdraw all connection from our Northern taskmasters, who were making us pay one dollar and fifty cents for shoes, ten cents per yard for shirting, two dollars per sack for salt, ten cents per pound for sugar, the same for coffee, &c.When this was published, prices in the South were far higher than this. The author is pointing out, sarcastically, that secessionists had been angry about high prices charged by northern merchants — prices that after three years of war, southerners would now have welcomed! And these same reckless men, who are now for putting all into the army, (except for themselves and a few favorites,) then told us that secession would be peaceable, and there would be no war; that we were to have a nation of our own, free from extortioners -- a perfect paradise with the tree of life, the cotton plant, in our midst, before which all nations were to bow down and worship, and from which rivers of free trade were to flow to the ends of the earth, on the bosom of which the rich merchandise from every clime was to be freighted and poured down in our laps free of taxation. How have they deceived us? The blood of hundreds of thousands of our poor children, smoking from the many battlefields, and the cries of starving women and children tell the tale. Will our people be longer deceived by those false prophets and arch-deceivers? Or will they not command the peace, and staunch these rivers of blood?

Raleigh Standard as quoted in the New York Times, January 22, 1864. 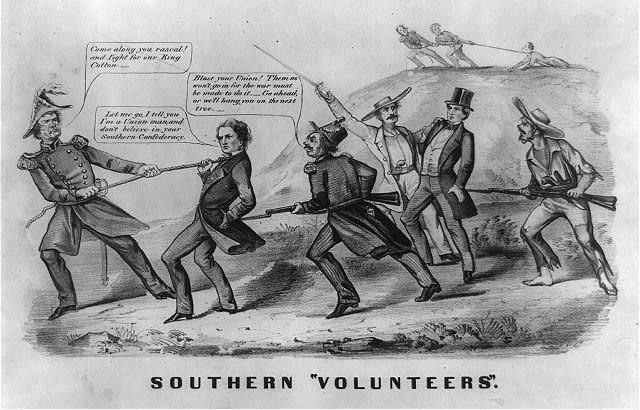 A political cartoon illustrating resentment at the practice of conscripting men into the Confederate Army. This lithograph was published in the North.