The University of North Carolina Opens

The University of North Carolina held its opening ceremony on January 15, 1795, and soon after became the first state university to enroll students.

The winter of 1794-1795 had been rough, and by mid January the roads were a muddy mess. Governor Richard Dobbs Spaight made the difficult trip from Raleigh to Chapel Hill for the official opening and was met by members of the Board of Trustees and other government officials. When these dignitaries gathered to open the University on January 15th, 1795, it was a cold, windy, rainy day and the area looked more like a construction site than a college campus. Only the two-story East Building and the unpainted wooden house of the Presiding Professor had been completed. The rest of the campus was filled with tree stumps, recently dug clay, and piles of lumber to be used for additional buildings. The North Carolina Journal reported that “the buildings prepared for the reception and accommodation of students are in part finished, and that youth disposed to enter the University may come forward with the assurance of being received.”

With the campus ready, and the Governor and school officials gathered for the ceremony, all that was missing was students. Unfortunately, none showed up. It wasn’t until three weeks later that 18-year-old Hinton James arrived on campus from his home in Wilmington from which, as legend has it, he walked all the way to Chapel Hill. For two weeks James comprised the entire student body, but he soon had company. By the end of the first term, the new university had 41 students receiving instruction from two faculty members. When the first graduation was held in 1798, James was among seven students receiving degrees.

The North Carolina Constitution of 1776 authorized “one or more” state universities. The university was formally established by the North Carolina General Assembly in December 1789, and the first members of the Board of Trustees met later that month to begin raising funds and to select a site for the school. A small group of commissioners charged with finding a location viewed more than a dozen sites in Orange and Chatham counties before selecting a spot at what was then called New Hope Chapel Hill. The cornerstone for the first building, East Building (now “Old East”), was laid on October 12, 1793. The drawing of East Building by a UNC student in 1797, shown on this page, is the first known image of the University of North Carolina. 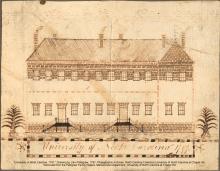 A drawing of UNC’s first building by one of its early students.