In the middle of the eighteenth century, a new wave of immigrants swept into North Carolina. These new settlers made homes in the Piedmont, and they came not from established settlements on the coastal plain but on the Great Wagon Road from Pennsylvania — where most had only recently arrived from Europe. The men and women who settled the Piedmont brought new cultures and religions to North Carolina, and they didn’t always see eye to eye with the leaders of the older settlements on the coast.

In this chapter we’ll meet some of the people who came to North Carolina’s Piedmont in the 1700s and explore their reasons for coming and the hardships they faced in getting here. We’ll also look at the roots of sectional conflict between the eastern and western parts of the state that would eventually explode into violent conflict. 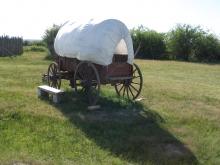