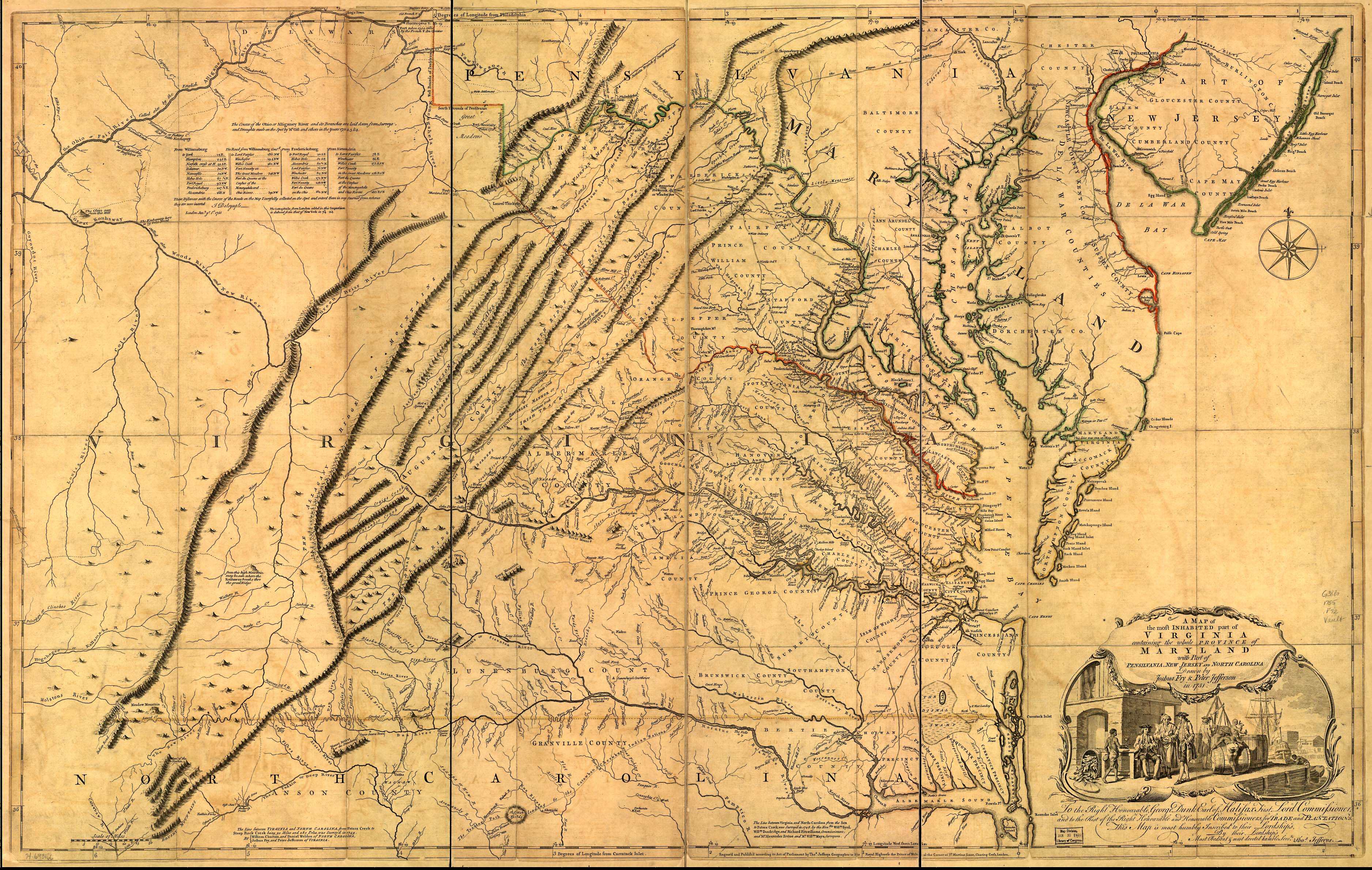 The map above, drawn by Joshua Fry and Peter Jefferson (Thomas Jefferson's father) in 1751, was the first to show "The Great Road from the Yadkin River thro Virginia to Philadelphia distant 455 Miles" -- what would come to be known as the Great Philadelphia Wagon Road or just the Great Wagon Road. Fry and Jefferson based their map on firsthand surveys -- not, as was common at the time, on the word of other people who had traveled through the land. On their map, the road ends at Wachovia (Wachaw), the Moravian settlement. Later, it would be extended further south and west. Also marked is the "Trading Path leading to the Catawba & Cherokee Indian Nations," the Indian trading path that predated European settlement.

Fry and Jefferson were commissioned to draw an accurate map of the most-inhabited (by whites, that is) parts of Virginia, and that was the only land they surveyed. As a result, they drew the border between Virginia and North Carolina only as far west as the Allegheny Mountains, although in theory that border still ran to the Pacific Ocean. Note that the western border of Pennsylvania is clearly drawn on the map; Virginia also claimed all the land that is now Ohio. Note also that the boundary between Maryland and Pennsylvania isn't drawn! That boundary was in dispute at the time. Not until 1763 would Mason and Dixon set out from Philadelphia to survey the boundary between the two colonies and draw the line that would bear their names.

Travellers headed west from Philadelphia to Lancaster, where they bought a wagon for the difficult journey ahead -- a "Conestoga wagon," named for the Conestoga River that runs through Lancaster. Building wagons was so important to Lancaster's economy that by 1770, Lancaster included among its craftsmen five wheelwrights, thirteen blacksmiths, seven turners, and twenty woodworkers.1 From there the road headed northwest to Harris Ferry -- present-day Harrisburg -- where travellers crossed the Susquehanna River.

Later in the eighteenth century, other roads continued or split off from the Great Wagon Road. By 1780, the Georgia Road continued from the Piedmont of North Carolina south through Salisbury and Charlotte and into Georgia. At Roanoke, Virginia, a road continued southwest through the Shenandoah Valley and met up with the Wilderness Road into Kentucky.

Between Philadelphia and Winston-Salem, travelers had to cross several major rivers and steep mountain passes. Despite its name, the “Great Wagon Road” was not always easily passable by wagon! But the route from Philadelphia into the southern backcountry was no wilderness, either. There were houses, towns, and trading posts along the way where travelers could buy food for themselves and their horses.

Roads are remarkably persistent. Once a road is established, towns and businesses spring up alongside it to serve travelers, and then more people travel the road to get to those new towns. Today, Interstate 81 follows the path of the wagon road from Harrisburg south through the Shenandoah Valley, and Interstate 85 follows the route of the Indian Trading Path from Petersburg, Virginia, southwest through North Carolina and into Georgia.

Google Maps can get you there more quickly, but we’ve added a few stops between Philadelphia and Winston-Salem to more closely follow the route of the Great Wagon Road.

The map above, drawn by Joshua Fry and Peter Jefferson (Thomas Jefferson's father) in 1751, was the first to show "The Great Road from the Yadkin River thro Virginia to Philadelphia distant 455 Miles" -- what would come to be known as the Great Philadelphia Wagon Road or just the Great Wagon Road." data-share-imageurl="">