Almost as soon as World War II had ended, the United States found itself in another global conflict. The Soviet Union wanted to expand its influence into Europe and Asia to protect itself from another disastrous invasion, while the United States wanted to promote and protect democracy. In this chapter, we’ll explore the causes of the Cold War, its major events, and its impact on North Carolinians. 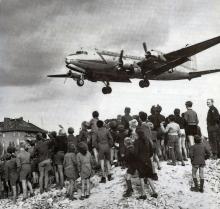 During the Berlin Airlift, the U.S. military delivered supplies to citizens of Soviet-blockaded West Berlin.