By 1960 government had become an increasingly powerful force in people's lives. During the Great Depression of the 1930s, new executive agencies were created to deal with many aspects of American life. During World War II, the number of civilians employed by the federal government rose from one million to 3.8 million, then stabilized at 2.5 million in the 1950s. Federal expenditures, which had stood at $3,100-million in 1929, increased to $75,000-million in 1953 and passed $150,000-million in the 1960s.

Most Americans accepted government's expanded role, even as they disagreed about how far that expansion should continue. Democrats generally wanted the government to ensure growth and stability. They wanted to extend federal benefits for education, health, and welfare. Many Republicans accepted a level of government responsibility, but hoped to cap spending and restore a larger measure of individual initiative. The presidential election of 1960 revealed a nation almost evenly divided between these visions.

John F. Kennedy, the Democratic victor by a narrow margin, was at 43 the youngest man ever to win the presidency. On television, in a series of debates with opponent Richard Nixon, he appeared able, articulate, and energetic. In the campaign, he spoke of moving aggressively into the new decade, for "the New Frontier is here whether we seek it or not." In his first inaugural address, he concluded with an eloquent plea: "Ask not what your country can do for you – ask what you can do for your country." Throughout his brief presidency, Kennedy's special combination of grace, wit, and style – far more than his specific legislative agenda – sustained his popularity and influenced generations of politicians to come.

Kennedy wanted to exert strong leadership to extend economic benefits to all citizens, but a razor?thin margin of victory limited his mandate. Even though the Democratic Party controlled both houses of Congress, conservative Southern Democrats often sided with the Republicans on issues involving the scope of governmental intervention in the economy. They resisted plans to increase federal aid to education, provide health insurance for the elderly, and create a new Department of Urban Affairs. And so, despite his lofty rhetoric, Kennedy's policies were often limited and restrained.

One priority was to end the recession, in progress when Kennedy took office, and restore economic growth. But Kennedy lost the confidence of business leaders in 1962, when he succeeded in rolling back what the administration regarded as an excessive price increase in the steel industry. Though the president achieved his immediate goal, he alienated an important source of support. Persuaded by his economic advisers that a large tax cut would stimulate the economy, Kennedy backed a bill providing for one. Conservative opposition in Congress, however, appeared to destroy any hopes of passing a bill most congressmen thought would widen the budget deficit.

The overall legislative record of the Kennedy administration was meager. The president made some gestures toward civil rights leaders but did not embrace the goals of the civil rights movement until demonstrations led by Martin Luther King Jr. forced his hand in 1963. Like Truman before him, he could not secure congressional passage of federal aid to public education or for a medical care program limited to the elderly. He gained only a modest increase in the minimum wage. Still, he did secure funding for a space program, and established the Peace Corps to send men and women overseas to assist developing countries in meeting their own needs.

Kennedy and the Cold War

President Kennedy came into office pledged to carry on the Cold War vigorously, but he also hoped for accommodation and was reluctant to commit American power. During his first year-and-a-half in office, he rejected American intervention after the CIA-guided Cuban exile invasion at the Bay of Pigs failed, effectively ceded the landlocked Southeast Asian nation of Laos to Communist control, and acquiesced in the building of the Berlin Wall. Kennedy’s decisions reinforced impressions of weakness that Soviet Premier Nikita Khrushchev had formed in their only personal meeting, a summit meeting at Vienna in June 1961.

It was against this backdrop that Kennedy faced the most serious event of the Cold War, the Cuban missile crisis.

In the fall of 1962, the administration learned that the Soviet Union was secretly installing offensive nuclear missiles in Cuba. After considering different options, Kennedy decided on a quarantine to prevent Soviet ships from bringing additional supplies to Cuba. He demanded publicly that the Soviets remove the weapons and warned that an attack from that island would bring retaliation against the USSR. After several days of tension, during which the world was closer than ever before to nuclear war, the Soviets agreed to remove the missiles. Critics charged that Kennedy had risked nuclear disaster when quiet diplomacy might have been effective. But most Americans and much of the non-Communist world applauded his decisiveness. The missile crisis made him for the first time the acknowledged leader of the democratic West.

In retrospect, the Cuban missile crisis marked a turning point in U.S.-Soviet relations. Both sides saw the need to defuse tensions that could lead to direct military conflict. The following year, the United States, the Soviet Union, and Great Britain signed a landmark Limited Test Ban Treaty prohibiting nuclear weapons tests in the atmosphere.

Death of a President

John Kennedy had gained world prestige by his management of the Cuban missile crisis and had won great popularity at home. Many believed he would win re-election easily in 1964. But on November 22, 1963, he was assassinated while riding in an open car during a visit to Dallas, Texas. His death, amplified by television coverage, was a traumatic event, just as Roosevelt’s had been 18 years earlier.

In retrospect, it is clear that Kennedy's reputation stems more from his style and eloquently stated ideals than from the implementation of his policies. He had laid out an impressive agenda but at his death much remained blocked in Congress. It was largely because of the political skill and legislative victories of his successor that Kennedy would be seen as a force for progressive change. 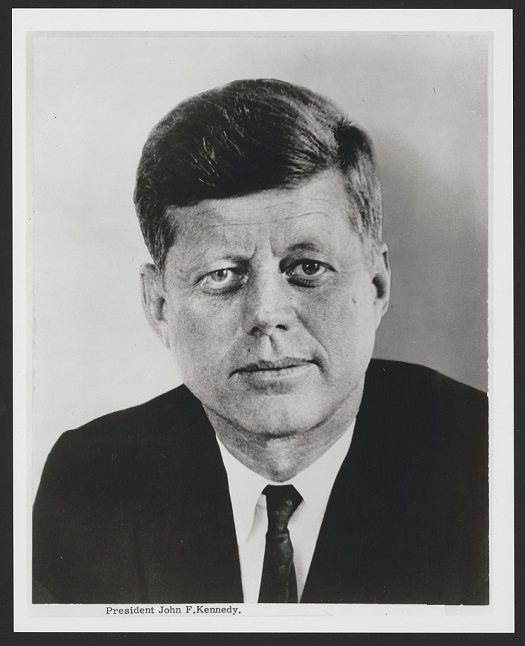 Executive Order 10924: Establishment of the Peace Corps. (1961)
from the National Archives

Aerial Photograph of Missiles in Cuba (1962)
from the National Archives