In November 1898, on the heels of the state Democratic Party’s white supremacy campaign, violence broke out in Wilmington. A white mob burned the offices of a black newspaper and killed at least twenty-five African Americans, then threw the elected Republican government of the city out of town and installed a white Democratic mayor and council in its place. In this chapter, we’ll examine first-hand accounts of the riot and its aftermath. We’ll also evaluate at the “suffrage amendment” of 1899 that effectively barred blacks from voting in North Carolina. 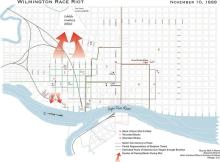