Hurricane Floyd, which struck 10 years ago this month, wasn't your typical tropical system.

Sure, other hurricanes had moved inland to batter us. Hurricane Hugo walloped Charlotte in 1989, and Hurricane Fran brought misery to the Triangle in 1996.

But no storm had ever impacted such a vast area. Floyd destroyed or damaged 80,000 structures and drowned millions of farm animals, causing an estimated $6 billion in damage and scaring communities from Interstate 95 to the ocean.

"Fran was a lot worse hurricane than Floyd," said Steve Holland, a former Pender County commissioner who lost his Holly Shelter restaurant to Floyd's floodwaters. "But it didn't do the devastation Floyd did. Compared to Floyd, there was no comparison."

Floyd didn't just swat the beaches. It brought a slow wave of destruction to the coast from inland areas, flooding anything and everything in its way in the process and making residents and emergency officials rethink the age-old adage of evacuating inland.

The storm was an environmental, economic and political tsunami whose legacy is still being felt today, from unbuildable oceanfront lots on Oak Island and stronger regulations for factory farms to rising insurance rates that prompted one of the testiest legislative debates in Raleigh this year.

On Sept. 16, Floyd was a weakening Category 2 hurricane as it neared the Cape Fear.

By the end of the month, it had become North Carolina's storm of the century.

At one point, Floyd was almost as strong and more than double the size of the Category 5 monster Hurricane Andrew that wiped out Homestead, Fla., seven years earlier.

But by the time it arrived off the Carolinas, the storm was weakening - although still physically a big system.

On Oak Island, Tommy Thomes ignored a mandatory evacuation order and decided to ride out the hurricane just like he had every other storm below Category 3 that had threatened the Brunswick County coast over the previous two decades.

Nearly 60 miles inland, Holland had little concern about the storm - except, in his position as a county commissioner, for the potential effects on people and homes on Topsail Island.

Holland, a native, knew hurricanes and their potential harm. When he opened his fish camp and restaurant along N.C. 53 nearly 30 years ago, he made sure it was built one foot higher than the flooding caused by Hurricane Hazel.

"That was the storm of record around here until Floyd," Holland said.

A few days later, his stuffed black bear Cleo and everything else was floating as 5½ feet of water filled the establishment.

Even the region's emergency managers were caught off guard by Floyd.

As the storm approached, Dan Summers, then emergency management director for New Hanover County, sent his wife "inland" to Greenville to be with their son.

"That wasn't such a good thing in retrospect," he said. Pitt County wound up being one of the most heavily flooded and damaged areas in the state.

That was because Floyd brought rain, and lots of it, to a region that was already saturated. Southport received the biggest drenching from Floyd .. 24 inches over 96 hours.

Steve Pfaff, senior forecaster at the National Weather Service's Wilmington office when Floyd was charging up the coast, said meteorologists were in awe as the rainfall amount from Floyd kept increasing.

"It was so much rain in such a short period of time that it was hard to fathom, no pun intended, how deep the water was going to be across the state," Pfaff said.

"They like to say hurricanes are floods in disguise. Well, Floyd proved that in spades."

Floyd hit while the region was still waterlogged from Hurricane Dennis, which had skirted the coast and drenched much of eastern North Carolina with up to 10 inches of rain two weeks earlier ... 19 inches on the Outer Banks.

"We were just soaked, and there was simply nowhere for the water to go," said Summers, now emergency services director in Florida's Collier County. "All those basins in eastern North Carolina filled up at the same time, and I really don't think that was a scenario in any emergency manager's mind.

"You just get into the habit of thinking all these storms are all going to be just wind events. You don't really expect more than half the state to have those types of impacts."

Residents evacuating inland found themselves coping with not only the more than 2 million people who had already fled Florida, Georgia and South Carolina as Floyd menanced their coasts, but roads that were becoming impassable, choked with vehicles and threatened by rising waters as the rains kept coming.

Highways became clogged, tempers flared and officials came within a whisker of reversing the eastbound lanes of Intestate 40 to help with the traffic crunch.

The most immediate impact was felt on Oak Island, where a storm surge of up to 15 feet punished the oceanfront.

Bald Head Island also got nailed, and Carolina Beach ended up with seemingly as much sand in its streets as on the beach.

Topsail Island also took a swipe from the storm's powerful northeast quadrant. But structural damage was limited ...œ not because the wind and storm-driven waves weren't powerful but because the "weak" buildings had been taken out by Fran three years earlier."

They didn't lose any buildings during Floyd, but 180 during Fran," said Spencer Rogers, a coastal engineering expert with N.C. Sea Grant. "But if Floyd had happened before Fran, there would have been much more damage than that."

Oak Island wasn't as lucky."You don't realize how strong the ocean is out there," said Mary Stanton, standing with her husband in the driveway of her second-row home along East Beach Drive that ended up with three feet of sand in and around it. "The winds, we did OK with. But it was the water that got us."

The island, although wiped clean by Hurricane Hazel four decades earlier, had largely avoided a major strike since then.

But on Oak Island, structures in the first two rows along many areas of the 14-mile-long island were heavily damaged or destroyed as Floyd steam-rolled ashore.

Some homes were simply washed away by the storm surge. Most of the island's crosswalks and oceanfront decks also were destroyed, along with wide swaths of beach and dune.

Thomes, then the owner of the now demolished Long Beach Pier, knew the island faced trouble when wind-driven waves started pushing up through his pier hours before high tide and the storm's landfall.

Later that evening, one of the pier's wings was ripped off, followed by the entire end section. By daybreak, the pier was gone.

"I expected some damage," Thomes said, noting that the pier sat 20 feet above the ocean. "I didn't expect it to destroy the whole pier, though."

Some of the pier's pilings ended up two miles down the island, the debris becoming a battering ram as it was tossed around by the angry surf.

Along with pilings, appliances, siding and ops and ends washed out from under oceanfront homes, septic tanks forced out of the ground came to rest in streets and under structures.

It took nearly two months for workers - including prisoners and National Guardsmen - to get most of the debris off Oak Island's streets, longer to clean up all of the sand, and well into 2000 to rebuild dune lines and beaches.

In parts of Pender County, the recovery effort took even longer.

Holland, who was recovering from a vehicle accident at Wilmington's Cape Fear Hospital when the storm hit, thought most of the region had dodged a bullet when Floyd passed over and the initial reports of damage proved relatively light.

Then the waters started to rise.

By the time they stopped, a nearly 12-mile section of N.C. 53 between Burgaw and Maple Hill was underwater.

So was his restaurant, as floodwaters crested at nearly 22 feet above Holly Shelter Creek.

"It was unbelievable," Holland said, aping that only three of the 134 homes around him weren't inundated. The stuffed bear swam for nearly two weeks, he said. "That's how long this area was flooded for."

Ironically, Holland had paid off his restaurant and fish camp in August 1999 - then watched Floyd cause $885,000 worth of damage a month later.

The result was much the same across eastern North Carolina as the relentless rain sent water into places that weren't supposed to flood - at least according to the floodplain maps. And if they weren't underwater initially, they were later as the floodwaters made their way down swollen rivers and creeks.

The flooding shattered high-water records, stymied evacuees trying to return home and later redefined how and where people could live and build.

Hurricane Isabel in 2003 had stronger winds. Hazel had a bigger storm surge. And Fran did more damage to the state's beaches.

But the devastation wrought by Floyd was on a scale all its own.

So was the recovery and rebuilding effort.

The storm drained North Carolina's rainy-day fund, caused massive budget cuts as money was redirected toward rebuilding efforts, and forced the state to embark on an aggressive public relations campaign to show the world that its beaches were still open for business.

Amazingly, considering the extent of the damage caused by Floyd, only 35 people died. Most were killed trying to drive through flooded roads.

A decade later, empty lots - whether deemed unbuildable or bought out by the government as part of its hazard-mitigation program -are the biggest tangible sign of Floyd's passing. Curious signs and large numbers painted on the pavement also line I-40 just in case the highway needs to be reversed for a future evacuation.

But with the passing of time, officials fret that one of the most important lessons of the hurricane might be lost.

"What Floyd showed us over and over again, unfortunately, is that people inland are just as vulnerable to a hurricane as people along the coast," said Pfaff, the meteorologist. "Everyone needs to pay attention when there's a storm on the way. Period." 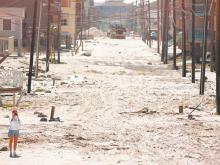 Paula Bruner documents the sand that was piled, up to 4 feet in places, in front of her vacation/rental home along Carolina Beach Avenue North at Carolina Beach. Hurricane Floyd caused severe tidal surge that brought sand with it onto the homes and street