The following is sampled from some of the speeches of George Henry White. George Henry White (1852-1918) represented North Carolina's second district in the U.S. House of Representatives from 1897 to 1901. White was black, and lynching was a tactic used by white supremacists to punish, scare, and kill black people across the United States for many years. White's following speech criticized lynching and its effects on black Americans.

Mr. Chairman, it would be great pleasure to me to know that fairness and justice would be meted out to all constituent parts of our beloved country alike in such a way as to leave no necessity for a defense of my race in this House against the attacks and unfair charges from any source. The very intimation of this fact with reference to the surroundings of the colored people of this country at this time, naturally causes the injury: Should not a nation be just to all of her citizens, protect them alike in all their rights, on every foot of her soil -- in a word, show herself capable of governing all within her domain before she undertakes to exercise sovereign authority over those of a foreign landIn the Spanish-American War of 1898, the United States claimed to be fighting to liberate the people of Cuba and the Philippines from Spanish rule. White is arguing that before the United States liberates people in other countries from tyrannical rule, it should first create an equal society at home. -- with foreign notions and habits not at all in harmony with our American system of government? Or, to be more explicit, should not charity first begin at home?

There can be but one candid and fair answer to this inquiry, and that is in the affirmative. But, unfortunately for us, what should have been done has not been done, and to substantiate this assertion we have but to pause for a moment and make a brief survey of the manumitted Afro-American during the last thirty-five years. We have struggled on as best we could with the odds against us at every turn. Our constitutional rights have been trodden under foot; our right of franchise in most every one of the original slave States has been virtually taken away from us, and during the time of our freedom fully 50,000 of my race have been ignominiously murdered by mobs, not 1 per cent of whom have been made to answer for their crimes in the courts of justice, and even here in the nation's Capitol -- in the Senate and House -- Senators and Representative have undertaken the unholy task of extenuating and excusing these foul deeds, and in some instances they have gone so far as to justify them.

It was only a few days ago upon this floor that the gentlemen from Mississippi [Mr. Williams] depicted one of these horrible butcheries and held it up to the public in the following language:

A man leaves his home -- a farmer. He goes down to the little town of Canton to market and sell his crop. It is rumored in the neighborhood that he had brought money from the market town the week before and that it is in the house. That night six or seven negro men break in to that house, ravish his daughter and his wife, and then they manacle and tie them together, and not only them but the little children -- one of them, I believe, four or five years of age -- manacle them down in the center of that house and set it on fire and burn them all up, hoping that the fire had done away with all trace of the crime. One of the negroes happened to have a peculiar foot, which led to tracking him. That led to crimination and recrimination among the criminals and to a confession. It led to confessions from other others. The people arose and lynched those men, and while they were lynching them they burned one of them, a voice coming from the crowd that he ought to receive the punishment himself which he had meted out to this innocent, helpless woman, her helpless daughter, and her helpless little children.

This is entirely ex parteex parte; nothing has been said of the other side. While I deprecate as much as any man can the fiend who commits an outrage upon any woman, and do not hesitate to say that he should be speedily tried and punished by the courts, yet I place but little credence in the statement of a mob hunting for an excuse for its crimes when the statement is made that the victim confessed with a rope perhaps around his neck. No court of justice anywhere in this broad land of ours would allow testimony under duress of this kind to be introduce against a defendant. A shoe track, a confession while being burned at the stake with the hope that life may be spared thereby, are very poor excuses for taking of a human life. A trial by jury is guaranteed to every one by the Constitution of the United States, and no one should be deprived of this guaranty, however grave the charge preferred against him.

In order to fasten public sentiment against the negro race and hold them up before the world in their entirety for being responsible for what some are pleased to call "the race crime" -- rape -- the gentleman from Georgia [Mr. Griggs] described in detail the other day the "fiendishness" of Sam Hose, late of his State, and I believe his district, and among other things he said:

But let me tell you of a case that happened in Georgia last year. A little family a few miles from the town of Newnan were at supper in their modest dining room. The father, the young mother, and the baby were seated at the table. Humble though it was, peace, happiness, and contentment reigned in that modest home. A monster in human form, an employee on the farm, crept into that happy little home and with an ax knocked out the brains of that father, snatched the child from its mother, threw it across the room out of his way, and then by force accomplished his foul purposed. I do not seek to justify that, but I do say that the man who would condemn those people unqualifiedly under these circumstances has water instead of blood to supply his circulation. Not the limpid water that flow from the mountain streams, Mr. Chairman, but the fetid water found in the cesspools of the cities.

The other side of this horrible story portrays a very different state of affairs. A white man, with no interest in Hose or his victim, declares upon oath that Hose did not commit this atrocious crime charged against him but was an employee of Cranford, and had importuned him for pay due him for labor. This incensed his employer, who rushed upon Hose with a gun. Hose seized an ax and killed Cranford instantly, in self-defense, and then fled to the woods with the greatest possible speed. I do not vouch for side of this story, but only refer to it to show the necessity for trying all persons charged with crime, as the law directs.

The gentleman might have gone further and described the butchery in his district of six colored persons arrested upon suspicion of being guilty of arson, and while they were crouching in a warehouse, manacled with irons, and guarded by officers of the law, these poor victims, perhaps guilty of no crime whatever, were horribly shot to death by irresponsibles, no one of whom has ever been brought to justice.

He might have depicted also, if he had been so inclined, the miserable butchery of men, women, and children in Wilmington, N.C.The Wilmington Race Riot, in November, 1898, who had committed no crime, nor were they even charged with crime. He might have taken the minds of his auditors to the horrible scene of the aged and infirm, male and female, women in bed from childbirth, driven from their homes to the woods, with no shelter save the protecting branches of the trees of the forest, where many died from exposure, privation, and disease contracted while exposed to the merciless weather. But this description would not have accomplished the purpose of riveting public sentiment upon every colored man of the South as a rapist from whose brutal assaults every white woman must be protected….

I have taken the pains to make some little investigation as to the charges against the 166 persons killed, and find as a result of my efforts that 32 were charged with murder, 17 were charged with assault, criminal or otherwise, 10 with arson, 2 with stealing, 1 with being impudent to white men, and I am ashamed to acknowledge it, but this latter took place in North Carolina. Seventy-two of the victims were murdered without any specific charge being preferred against them whatever. Continuing this record of carnage, I give the record of the number of lynchings, with causes, from April 24, 1899, to October 20, 1899, inclusive: Crime committed:

These facts and figures which I have detailed are reliable; still the same old, oft-repeated slander, like Banquo's ghostIn William Shakespeare’s play Macbeth, the title character became king of Scotland by murdering the previous king. Macbeth also has his friend and ally Banquo murdered because he believes him to be a political threat. Banquo’s ghost appears to Macbeth at a banquet, but only Macbeth can see the ghost. Macbeth rants and shouts at an empty chair, leaving the guests at the banquet to believe that Macbeth has gone insane., will not down, but is always in evidence. 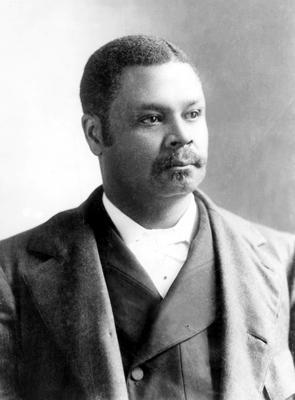