Releasing certain “loyal” Japanese Americans but still detaining certain others made prison camps legally indefensible. As such, the federal government began preparations to close concentration camps during Endo’s trial. On December 18, 1944, Roosevelt’s administration announced that the period of “military necessity” for removal and relocation had ended and that Japanese Americans were once again permitted to freely exist within the Pacific coast region. Despite Japanese American people being imprisoned for threat of espionage and security risk, no one with Japanese ancestry was ever charged with espionage during this period. However, between 1942 and 1945, 18 white people were sent to trial for spying for Japan and ten of those tried were convicted in court.

Life After the Camps

All concentration camps were finally decommissioned and their final prisoners were released  when Tule Lake closed in March 1946. After being released from prison camps, some families “resettled” (a term used by the WRA) in the interior US, like Idaho, Colorado, or Utah. Most “resettlers'' did so out of financial hardship, as they lost most if not all of their financial security when they were put into prison camps by the WRA. Most people who had been imprisoned chose to return to their former homes along the west coast, though some chose to join family members that had “resettled” in the interior. As Japanese Americans deemed “loyal” were released from the camps after the Ex Parte Endo decision and others returned after the total end of internment, they encountered major challenges in both the housing and job markets. Manual labor was often all that was available for hire, and this often placed Japanese American people in positions like farming, caretaking, or cleaning services. For most, these were not the positions that they had been forced from by the U.S. government when internment began. Japanese American working professionals, with dedicated, established careers like law, business, or medicine, were now placed back at square one by the effects of imprisonment. Additionally, many rural Japanese farmers whose land had been bought by speculators before imprisonment were another set of victims of this labor crisis. Japanese Americans also faced discrimination from people in the communities to which they were returning, such as the boycott of agricultural products grown by farmers of Japanese ancestry, increased discrimination, violence, and racism over their presence.

There were also significant financial damages caused by imprisonment. Overall, those imprisoned in the camps lost an estimated $2 billion to $5 billion worth of property by today’s standards. After the war, Congress voted to unfreeze seized assets and allowed for restitutions to be paid on those assets in 1945. However, low rates for compensation and harsh rules established by the administrative offices resulted in low numbers of restitution being paid out for frozen or seized assets.  In 1948, Congress issued a small reparations package of $38 million ($386 million by today’s standards) to those affected by property losses caused by imprisonment under the Japanese American Evacuation Claims Act signed into law by Harry Truman. These reparations were limited due to the stipulations of the act which required documentation and receipts of removal, relocation, and imprisonment, which few Japanese American people had access to after internment ended. There were also additional legal barriers within the act. Those who wished to recoup losses from this act had to swear that they would seek no further action concerning their wartime imprisonment. The act also only covered loss of property due to relocation and removal and offered no additional aid for lost wages, personal injury, or any additional costs associated with being imprisoned by the U.S. government. The Justice Department was also slow to settle with each claimant in what could be considered a “loss” and refused to authorize reimbursements in many cases. Of the 23,689 claims under the new law, the Justice Department had only heard 200 of them by 1950 and had only authorized reimbursement for 137 claimants. The claims from this act were finally resolved in 1965, but the reimbursed $38 million was a mere fraction of the total financial losses Japanese American people faced due to imprisonment.

In 1976, President Gerald Ford officially repealed Executive Order 9066. The order was repealed as part of Ford’s initiative to highlight national treasures, as well as mistakes. He issued an apology to Japanese American people on behalf of the government for the actions and effects of imprisonment. In 1988, Congress passed the U.S. Civil Liberties Act. Included in this act was the stipulation that every surviving U.S. citizen or legal resident immigrant of Japanese ancestry imprisoned during World War II was to be given $20,000 and a formal presidential apology. Payments for this program began in 1990. These restitutions were helpful to Japanese Americans affected by imprisonment. However, they were a meager replacement for the years, relationships, and opportunities that imprisonment limited, removed, or even destroyed in some cases. 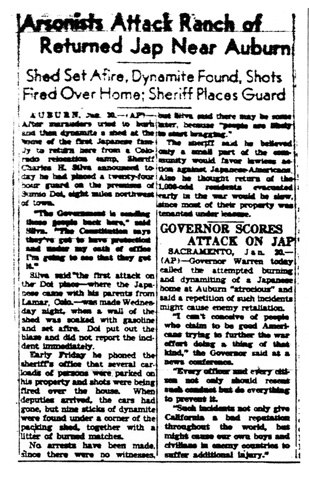 Leaving home behind: The fates of Japanese American houses during incarceration

The Return of Japanese Americans to the West Coast in 1945

Compensation and Reparations for the Evacuation, Relocation, and Internment Index (Redress Case Files) 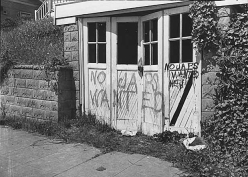 from the University of Washington