North Carolina’s legal system, like those of other states, came from a variety of sources. The first laws governing the colonies were British laws, of course, but British law itself came from two different sources. The first was statutory law, which consisted of statutes or laws passed by Parliament. The second was common law, which was based on ancient traditions and kept alive or modified through the decisions of judges. In addition to British statutes and common law, the colonial legislatures passed their own laws. After the Revolution, colonial laws became state laws, and the common law remained in force. As a result, state laws were often quite complicated.

During and after the Revolution, reformers in the United States worked to create new systems of laws that met the ideals of the time. First, they wanted to make the laws more humane, by setting out punishments that were only harsh enough to deter crime. In particular, they wanted to reduce the number of crimes punishable by death. As late as 1817, North Carolina still had twenty-eight felonies, or major crimes, punishable by death -- including arson, burglary, murder, highway robbery, bestiality or sodomy, duelling, bigamy, prison escape, concealing childbirth, stealing slaves or helping them to escape, kidnaping free blacks and selling them, and conspiring to inem a slave insurrection; as well as second offenses of horse-stealing, maiming, forgery, and counterfeiting (including counterfeiting of lottery tickets). By today’s standards, these laws were barbaric, but they were a tremendous improvement on the laws of eighteenth-century Great Britain, which had two hundred crimes punishable by hanging!

Second, they wanted to codify the laws, or write them down as a “code” of laws. To rational men of the Enlightenment, a system in which a judge could interpret and enforce the law as he pleased seemed unfair and unjust. The only way to ensure that everyone received fair and equal treatment under the law -- a key principle of a republic -- was to make sure the law was clear and consistent.

In some cases, people convicted of capital crimes could plead benefit of clergy and receive a lesser sentence. In the Middle Ages, members of the clergy -- that is, priests, monks, and nuns -- could not be punished by the secular government but only by the Catholic Church. At first, accused persons had to prove that they were clergy in order to receive benefit of clergy, but later they had to prove only that they could read a passage from the Latin Bible. Gradually the benefit was expanded. By the eighteenth century, anyone guilty of a first offense of a lesser capital crime could receive benefit of clergy, and would receive a lesser punishment. Some received “transportation” to the colonies as an indentured servant, while others were branded on the thumb to prevent their pleading benefit of clergy a second time. For some crimes, though, such as murder, the sentence was “death without benefit of clergy,” meaning that there was no alternative to the gallows. Essentially, serious criminals were either killed or set free -- long-term imprisonment wasn't used.

If all this is confusing to you, don’t worry -- it was confusing to most Americans at the time of the Revolution, too, and once they had declared independence, some of them moved quickly to change it. In 1777, Thomas Jefferson introduced a bill in Virginia’s House of Delegates (the lower house of its legislature) that would have abolished the death penalty except for treason and murder, eliminated benefit of clergy, and defined punishments that were proportionate to the crimes -- usually imprisonment and hard labor, but occasionally castration or mutilation. His proposals were initially defeated, but by 1800, several states, including Virginia, Pennsylvania, New York, New Jersey, and Kentucky, had reformed their laws along similar lines, reducing the number of capital crimes and substituting imprisonment for most lesser crimes. 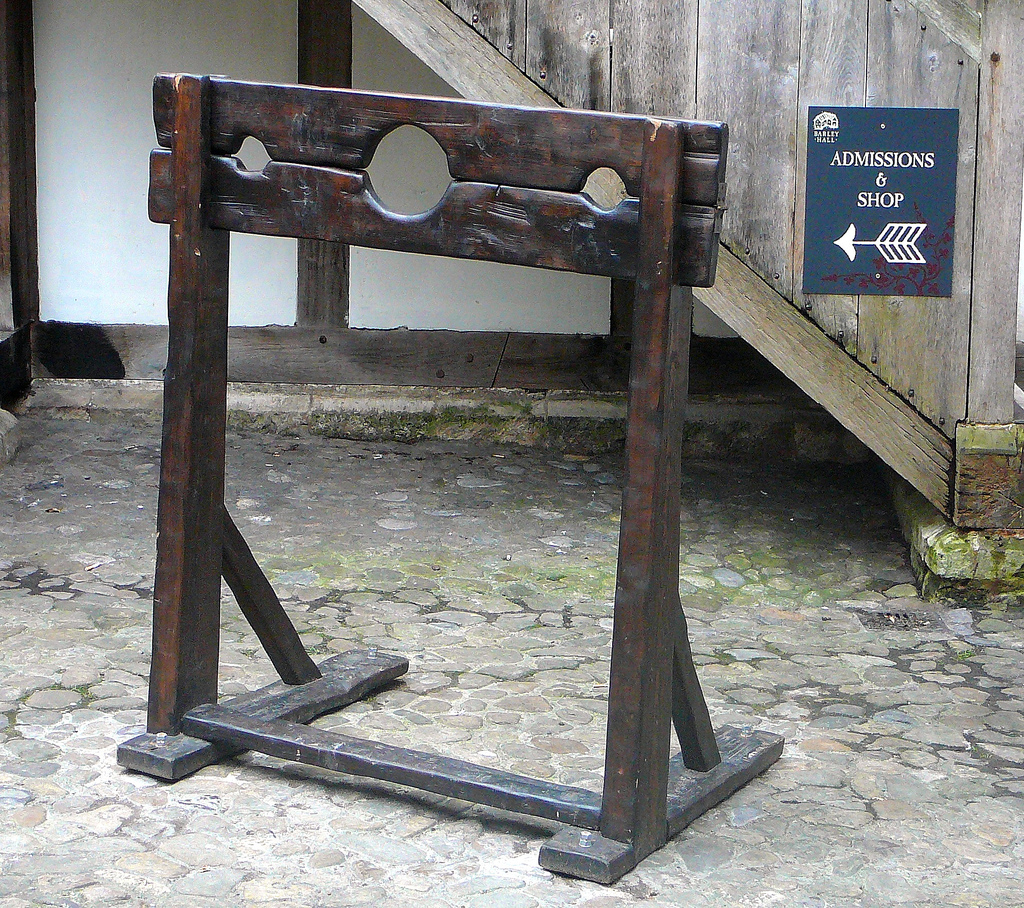 North Carolina continued to use punishments like the pillory, in which a criminal could be immobilized for public humiliation and abuse.

North Carolina was slower to reform its laws. It was widely said that North Carolina had "the bloodiest code of laws of any state in the Union."1 Not only were more than twenty crimes punishable by hanging, but the state kept a variety of punishments on the books for lesser crimes. Persons convicted of perjury -- lying under oath -- in a trial for a capital crime could have their ears cut off. For other crimes, a person might face not only fines and imprisonment but branding, flogging, the pillory (see illustration), or the ducking stool -- being tied to a stool and repeatedly "ducked" under water. Persons found publicly drunk on the Sabbath could face time in the stocks, while a "common scold" -- a woman who broke the peace by continually arguing with her neighbors -- faced ducking. Some punishments were public humiliation, while others were a form of torture. As a rule, African Americans were more likely to be subjected to physical and humilitating punishments than whites, and poor whites faced them more often than middle- and upper-class whites.

Several attempts were made to reform North Carolina's laws in the first half of the nineteenth century. In particular, white reformers seem to have been offended by the idea of white men and women being subjected to humiliating punishments -- especially at a time when Southern society was become more divided by race than ever. A letter to the Raleigh Register in 1846 protested that -


We have, this day, witnessed the most humiliating scene that has ever been exhibited before us. Two white men were, by order of the court, led to the public whipping post, there stripped and fastened, and lashed with nine and thirty, until their skin was rough with whelks and red with blood. We have never beheld a scene more degrading to the noble sentiments that should be nurtured and cultivated in the breast of every freeman. It makes us almost hate ourselves, to think that we are of their kind -- yea, their fellow-citizens.2

Reformers wanted to clarify the laws, reduce the number of capital crimes, build a state prison, and create programs to rehabilitate criminals. In the first two areas they were partly successful. The Revised Code of 1855 reduced the number of captial crimes to twelve -- arson, bigamy, burglary, counterfeiting, dueling, forgery, horse-stealing, housebreaking, inducing a slave to run away, murder, rape, and stealing a slave.3But no prison was built, efforts at rehabilitating criminals failed, and archaic punishments remained on the books. Major reform would have to wait until after the Civil War. 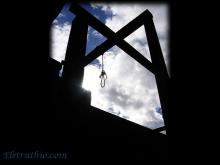 In antebellum North Carolina, more than twenty crimes were punishable by hanging.