Following the war, President Andrew Johnson moved to Reconstruct the South on his own initiative. Yet Southern states (including North Carolina) began to pass "Black Codes," or laws subjecting formerly enslaved people to a variety of restrictions on their freedom.

Secret societies, including the Ku Klux Klan, were formed initially to terrorize black people, and the Klan quickly spread to North Carolina.

In 1866, the 14th Amendment to the U.S. Constitution was passed by Congress, granting full citizenship to black Americans, and giving the Federal government responsibility to protect equal rights under the law to all American citizens.

In 1867, Congress temporarily placed most of the South under military rule. North Carolina was in the Second Military District (out of five) under Maj. Gen. Daniel Sickles (March-August 1867) and Brig. Gen. Edward R. S. Canby (September 1867-August 1868). After 1868, the Federal military presence in North Carolina dwindled. The capital city of Raleigh, however, remained a military outpost. During this period, the force was reduced to around 500 troops statewide, and included the 8th U.S. Infantry. The occupation lasted until 1877, when "home rule" was finally restored.

In North Carolina, President Johnson appointed William W. Holden as provisional governor, and many Confederates were pardoned. Jonathan Worth, wartime state treasurer, then defeated Holden for the governorship, and many former Confederate officials were elected to Congress. Congress, however, refused to seat these delegates on the grounds that they had been disloyal to the Union and freedmen were being mistreated (via the "Black Codes").

Johnson and the U.S. Congress clashed over Reconstruction policy. Congress wanted full citizenship and civil rights for freedmen, while Johnson did not. Congressional Republicans overrode Johnson's veto to pass Reconstruction acts, which placed the southern states, except Tennessee, under military control, disfranchised many former Confederates, and required states to revise their constitutions to enfranchise freedmen. When these states were reorganized under their new constitutions, they were required to ratify the 14th Amendment, which would allow them to regain their seats in Congress. North Carolina ratified the 14th Amendment on July 4, 1868 and was readmitted to the Union.

Several African American military units pulled duty in North Carolina during the occupation. The 37th U.S. Colored Troops were stationed at various points along the coast until February 1867. The 40th U.S. Infantry (colored) served in North Carolina from March 1867 through March 1869. During this period, Fort Macon was used as a jail.

Former Union general Ulysses S. Grant was elected president in 1868. Though aligned with the "Radical Republicans" in Congress, Grant did not provide strong leadership during Reconstruction.

In 1869, the 15th Amendment was passed by Congress, prohibiting any state from denying a citizen the right to vote because of race, color, or previous condition of servitude. North Carolina ratified the 15th Amendment on March 5, 1869.

William W. Holden headed the new North Carolina Republican Party, which included freedmen, carpetbaggers, and native whites. The Republicans controlled the state convention of 1868 that drafted a more democratic constitution. They also controlled the new state government, and Holden was elected governor. During this period, North Carolina sent 13 African American delegates to the state constitutional convention in 1867. Between 1870 and 1876, North Carolina's African American office holders included 30 state legislators and one U. S. Congressman (John A. Hyman, a formerly enslaved person, who held office from 1875 to 1877. Hyman had also served in the North Carolina State Senate, 1868-1874). Unfortunately, the "new order" did not last long.

Opponents of Holden's regime used the issue of "white supremacy" and violence to regain control of state government. The Ku Klux Klan operated in counties with slight Republican majorities. Using murder and intimidation, the Klan suppressed the Republican vote in 1870.

On February 26, 1870, Wyatt Outlaw — a formerly enslaved person and former Union soldier — was lynched by the Klan in Alamance County (where Outlaw was politically active). On May 21, 1870, state senator and Freedmen's Bureau agent John W. Stephens — who had tried to organize the black population in Caswell County — was assassinated by the Klan at the county court house. Governor Holden used state troops against the Klan, but captives were released by federal judges.

Controlling the 1871 legislature, Democrats impeached Holden and removed him from office (the first governor in American history to suffer such a fate). The Republican Party did win the governorship in 1872 and nearly controlled the state convention of 1875 that revised the constitution for Democratic advantage. But in 1876, the Democratic Party established white supremacy in state government and used fraud to remain in power.

Thus Jubilation turned to Jim Crow, and another uphill battle was begun. This legacy was still being felt by the time of the white overthrow of black government in Wilmington — one of North Carolina's most progressive towns — in 1898 (popularly known as the "Wilmington Race Riot").

A few more African Americans from North Carolina did, however, serve in the U.S. Congress in the late nineteenth century, including James E. O'Hara (1883-1887); Henry P. Cheatham (1889-1893); and George Henry White (1897-1901). White was the only black member of Congress during his tenure, and 28 years would pass before another black member was seated.

It would take diligent activism and new Civil Rights laws passed in the mid-1960s for the South to even begin to overcome the legacy of slavery. That struggle continues today.

From the North Carolina Historic Sites. 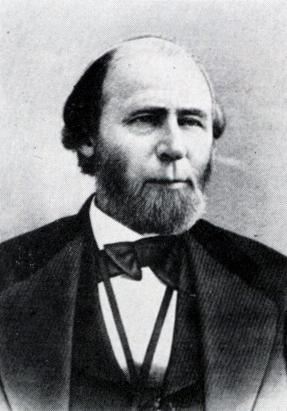 William Woods Holden was elected governor by the Republican majority that briefly ruled North Carolina during Reconstruction, but he was impeached and removed from office when Democrats regained control of the legislature.