In the colonial period, how and when people got married depended on whether they were indentured servants, slaves, free laborers, or wealthy people.

On average, free white people in North Carolina married between the age of eighteen and twenty. A free person had to be twenty-one years of age to marry; anyone younger needed the consent of their parents. Indentured servants could not get married until after their term of service, which was usually seven years. Many indentured servants were in their teen years or early twenties when they began their contract, and so they tended to marry later than free people, usually around the age of thirty.

Children from families with money and property usually had official, legal, marriage ceremonies. When their children married, families formed political and business alliances. Parents were very involved in helping children choose a marriage partner, although these were not arranged marriages. A parent might veto a child’s decision, but would rarely force children to marry against their will.

A father provided his daughter with a dowry, which involved the transfer of money or land to the groom. The dowry would help to support the new bride and the couple’s children.

The groom’s family wanted to make sure that their son married a woman from a respectable family who would be faithful to her husband and raise their children to be upstanding members of society. Inheritance laws favored sons, and so any male children from this union would inherit their father’s property. A groom’s family also wanted him to marry someone who would bring money into the family, not a poor woman.

Most free people in North Carolina were not very wealthy, and these people had much more freedom to choose a husband or wife than the elites. Because they were making their own way in the world and were not inheriting property from families, they could form marriages based on affection and friendship with little interference from their parents.

Many white people in North Carolina never formally legalized their marriages. One reason was because it cost a lot of money to purchase a marriage certificate in the colonial period, about £50. This was beyond the means of most people in North Carolina. (See The value of money in colonial America.) Instead, some couples simply posted banns when they chose to marry, which was a tradition practiced by poor people in England. Banns were an announcement informing the community of a couple’s plans to wed. They had to be read three weeks in a row, which allowed time for anyone to object to the match (for example, if the bride or groom was already married). It also allowed the couple time to change their minds.

In England, a minister read the banns, but in North Carolina, there were few ministers, so couples would simply make the announcement to families or friends. Once the couple had made the announcement three times, the community considered them to be married. Until the mid-eighteenth century, though, the posting of banns was simply a ceremony without legal weight. In 1741, the Colonial Assembly, recognizing that most people could not afford a marriage license, passed a bill that made the posting of banns the legal equivalent of a marriage ceremony. To be legal, though, the banns had to be read by a government official or by a clergyman from the Church of England.

Even after the posting of banns became a legal form of marriage, some couples still did not make their unions official. One reason was that colonial society was disorderly, and it was often difficult to find a religious or government official to read the banns. In these cases, the community would simply accept a couple and treat them as though they were married. This meant that the community expected a couple to be faithful to each other and that the man would be responsible for educating and providing for his children, even though there was no legal contract.

Another reason some people did not legally marry was that only Church of England ministers could perform marriages. There were many different religious groups in North Carolina and so people who belonged to a different church, such as the Quakers, would participate in a religious ceremony with their church community. Quakers did not have clergymen and a couple would simply stand before the congregation three times and announce their intent to marry, at which point they were married.

An advantage of an informal marriage was that it allowed a couple to separate on their own terms. Colonial society was often chaotic, and people were constantly moving and relocating, especially men. If a woman was abandoned by her husband, she would most likely want to remarry. With more men than women in North Carolina, an abandoned wife would have many opportunities to form a new union. Without a formal marriage, she did not need a formal divorce, and she could take a new husband with little difficulty. Divorces were almost impossible to come by and were only granted for incest (cases where the husband and wife were found to be related), bigamy (when one partner was already married), or a husband's impotence (inability to have sexual relations). Legal separations were sometimes granted, but without the right to remarry. For the most part, unhappy couples simply separated and formed new unions without bothering with a legal divorce.

Enslaved African Americans could not legally marry. North Carolina, like all other colonies, passed laws that made it illegal for slaves to marry or for a white person to marry a black person. Yet many African Americans married and had families despite the fact that at any moment, they or their children could be sold.

As with poor whites, it was the community that validated the marriages of African Americans by treating the couple as though they were married. Sometimes, slaves would “jump the broom.” This was a ceremony, imported from Africa, in which two people would hold a broom at the base of a door and the couple would hold hands and jump over it. This signified that they had chosen each other as life partners.

Many slave masters encouraged slaves to choose a spouse and tried to keep families together. A slave was less likely to run away if he or she had a spouse and children. But when there were bills to pay, or when the property was divided up at the time of the slave-master’s death, families were broken up. Slave owners might also sell a spouse to punish an unruly slave. 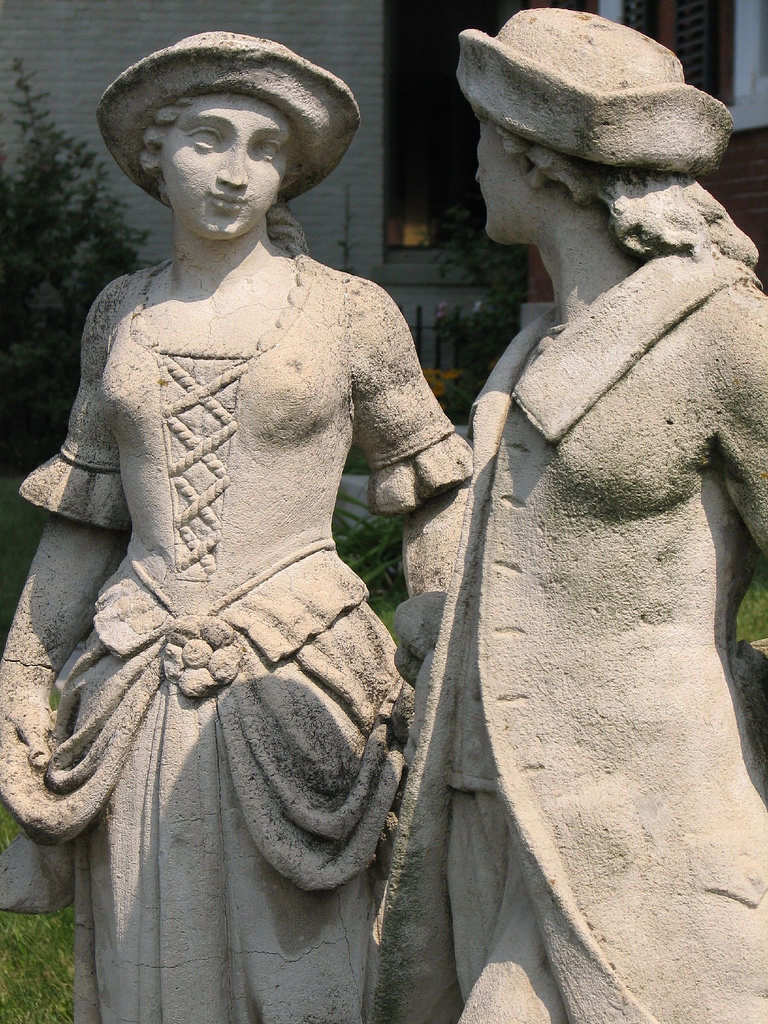 When people today imagine colonial marriages, they probably think of wealthy couples -- but their experience wasn't at all typical.