Though electricity first arrived in Winston and Salem in 1887, it was the pioneering work a decade later that truly moved the towns forward in terms of productivity and industrial development.

The Electric Light and Motive Power Company first offered power service in the towns. "But in 1897," James Howell Smith writes, “the Board of Commissioners of Winston granted the franchise to the Fries Manufacturing and Power Company to "transmit and distribute to the manufacturing enterprises of Winston and vicinity, electricity as a motor power."

"Transmission" marked the significant difference in the Fries project. The company, led by Henry E. Fries (mayor of Salem 1889-1892, Salem commissioner for 18 years following), proposed to harness the power of the Yadkin River. They would then transmit that power to Salem and transform it.

It may sound insignificant in the 21st century, but the 13.4 mile distance from the new Idols Dam to Salem was a measurable hurdle in 1898.

The dam and power plant were built on the site of a historic ferry operation run by a man named Idol. Today, it is at the point where Idol’s Dam Road meets the Yadkin River, due south of modern-day Clemmons and across the river from Davie County.

When the plant officially opened on April 20, 1898, it initially produced only 1,000 horsepower. Nevertheless, Bishop Rondthaler is quoted as saying that the plant "settled the future of this community as a prosperous manufacturing centre."

The Idols Hydroelectric Station, a small operation at first, eventually averaged 2,300 horsepower in production. But it had famous backers, including Thomas Edison, and it became the first commercial hydroelectric generating station in North Carolina using long-distance equipment. That early development naturally gave the businesses of Winston and Salem a competitive advantage over others in Virginia and the Carolinas.

The Idols Dam was built as a “run-of-the-river” plant, meaning that the dam was not built to hold back the river measurably. In part, this choice was made to prevent flooding in the low-lying area where the power plant and an earlier mill were located.

Ironically, in the fall of the year that the 482-foot curving dam was completed, the Yadkin flooded, causing the Fries organization to invest an additional $30,000 to lengthen the dam and increase protection of the powerhouse. Nevertheless, "floods did not deter sightseers, who crowded the roads to the site for months [to] see the facility."

The power created at the Idols plant was carried by transmission lines to a substation located in a triangular building at Shallowford (now Brookstown) Road and Marshall Street. That building still stands, though it is no longer used for that purpose.

The date is uncertain, but a second line of turbines and a generator were added to the plant, probably in 1903.

On June 25, 1913, the Fries Manufacturing & Power Co. was absorbed by Southern Public Utility Co., which in turn became part of Duke Power Co. In February 1914, Duke took over the Idols Power Plant and replaced the original machinery with new units. Five of those six units were said to be still in operation in 1984, when the Carolina Section of the American Society of Mechanical Engineers named the power plant a Regional Historic Mechanical Engineering Landmark.

In 1998, however, a fire destroyed the generator shed built out over the river and ruined the interior of the brick building that housed the transformers.

The Utility Commission of Winston-Salem and Forsyth County has reworked the facility to improve water flow while contemplating the reactivation of two generator/turbine combinations. Meanwhile, another generator/turbine set and bricks from the historic structures have been saved for future historic preservation efforts that are planned to restore the original buildings and establish exhibits describing this pioneering facility.

franchise to the Fries Manufacturing and Power Company to "transmit and distribute to the manufacturing enterprises of Winston and vicinity, electricity as a motor power." data-share-imageurl=""> 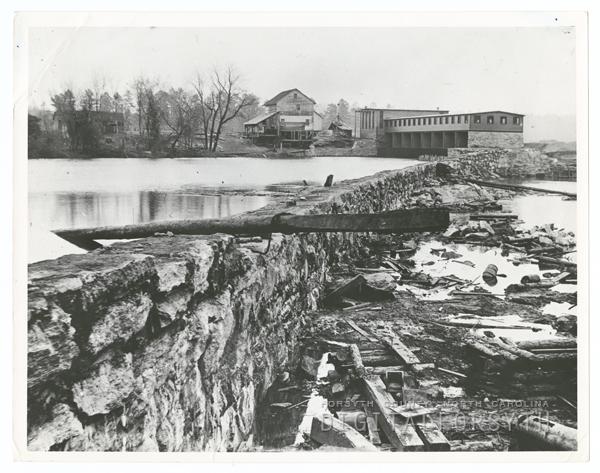 Idol's Dam and Power Plant on the Yadkin River, shortly after the plant was built in 1898.