Facing dire warnings that Falls Lake could go dry this summer or fall, at least one member of Raleigh's City Council is thinking about the previously unthinkable -- whether the fast-growing city needs a temporary growth moratorium.

In a terse exchange during a Tuesday meeting about the drought, City Council member Rodger Koopman raised the idea of a pause in building. He quickly ran into resistance from other city officials.

Beyond City Hall, Koopman's lonely call for putting the brakes on development strikes a chord with Raleigh residents and business owners who are being asked to make do with less and less water. They wonder why the city keeps letting new homes, stores, industries and other users tap into the system.

"How can the city of Raleigh continue to allow uncontrolled developing and building if there is not sufficient water for the existing homes and businesses?" asked resident Allan Marquis, 61, a retired railroad manager. "It is all about money -- greed -- versus common sense."

Koopman's idea got a cool reception from City Manager Russell Allen. Allen said a moratorium wouldn't help in time for this drought, for two reasons: Building permits that have already been issued can't be rescinded, and construction that hasn't started probably would outlast the drought.

Also, the city manager said, Raleigh's policy needs to take into account that a moratorium would hurt the city's economy.

"What's the economic impact of running out of water?" Koopman retorted.

Despite the drought, Raleigh keeps growing. The city's population grew last year by an estimated 4.2 percent, or almost 15,000 people.

Raleigh issued 8,675 building permits last year, according to city records. Almost 5,000 were issued after the drought's local declaration in May.

Mayor Charles Meeker asked Tuesday for a staff report on the moratorium proposal before the council's March 4 meeting. But the mayor has already said he opposes a moratorium.

"It's not a good idea right now," Meeker said in a recent interview. "Even if you stopped all the hookups today, you'd only save 1 or 2 percent of our water over the next year. It wouldn't be a significant factor."

At the same time, Meeker said, a moratorium "might put our economy into a recession."

"We need to make smart decisions," he said, "not just decisions that sound plausible on the surface but don't really have much impact."

Home builders and other local business interests strongly oppose a halt in development. Harvey Schmitt, president of the Greater Raleigh Chamber of Commerce, said a development moratorium could devastate the local economy.

"You don't want to impose any more economic damage on a community than is absolutely required," Schmitt said Tuesday. "Our responses need to be measured, so as not to cripple our economy when it is already fragile nationally."

Raleigh's conservation efforts are working and should continue, Schmitt said.

"Growth is not the problem," he said. "The drought is the problem. We need to stay the course."

As the drought continues, however, the moratorium idea seems to be gaining ground among residents.

"Charles Meeker and the city are too late," said Joel Youngblood, 51, a Garner engineer whose water comes from Raleigh. "They needed to stop lawn watering and new development last summer to conserve water. The cause is not the 'old' water consumers not conserving -- there is only so much that can be done -- it is the rapid and wasteful apition of new customers."

Dean Naujoks, an environmental activist who focuses on the Neuse River, sympathizes with those calling for a pause in development.

"I think it may become necessary," he said. "We've kind of forced ourselves into a position where we've really limited our options. Had we gone to conservation sooner, we may have more options on the table." 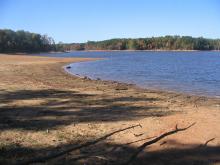