The Battle of New Bern

The Battle of New Bern on March 14, 1862, was the second of three major engagements on the North Carolina coast in the second year of the Civil War. On February 7-8, Union troops under General Ambrose Burnside captured Roanoke Island, thereby securing control of the sound region. In March, those same forces captured New Bern, a strategic port town and the state’s second largest city. On April 8, Burnside’s expedition laid siege to Fort Macon and two weeks later took the stronghold. With it they gained another deepwater port at Beaufort and control of the entire northern and central portion of the state’s coast. Only the Cape Fear, the “lifeline of the Confederacy,” remained open to use by blockade runners through January 1865.

The advance on New Bern was a strategic success and provided a boost to Burnside’s reputation. He threw all available force into the effort. Leaving a single brigade to guard Roanoke Island, Burnside’s fleet sailed on March 11, stopping at Hatteras where they were joined by an additional thirteen gunboats, making a combined force of 11,000 men. The expedition was made up primarily of soldiers from Massachusetts, Pennsylvania, and Rhode Island. On March 12, sailing in two parallel lines, the fleet entered the Neuse River. The scene, one soldier, reminded him of "our summer steamer with excursionists."

They anchored at the mouth of Slocum’s Creek and, early on the morning on March 13, shelled the shoreline and disembarked. No Confederates were posted there but signals upriver set bonfires to announce the Federals' approach. The troops marched overland about two miles to reach the Beaufort-New Bern road. On soldier wrote of the "muddiest mud ever invented, being knee-deep and of a black, unctuous, slippery character." Burnside’s army pressed on, a total of thirteen miles, to New Bern. The next day, March 14, the town fell to the Union soldiers and remained occupied for the rest of the war. 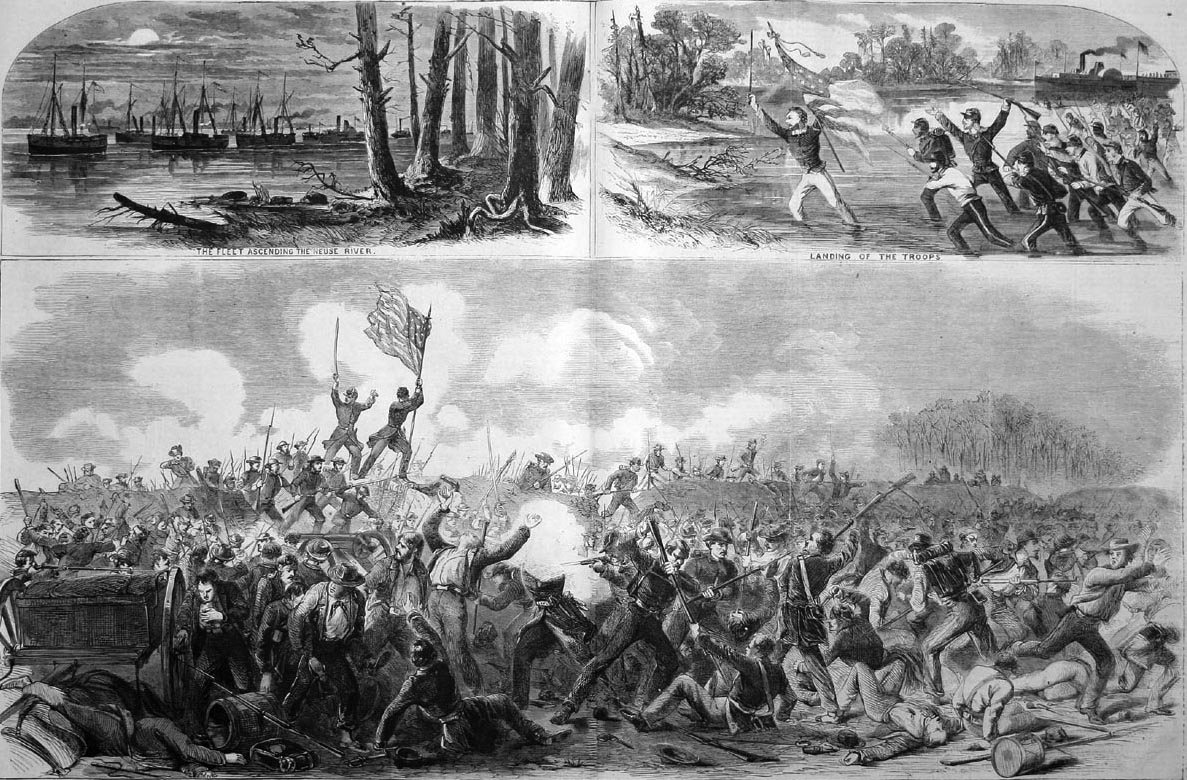 Engravings of the Battle of Newbern. Clockwise, from top left: The Fleet Ascending the Neuse River; Landing of the Troops; The Burnside Expedition -- The Storming of Fort Thompson at Newbern, North Carolina, March 14, 1862.