In North Carolina, tobacco growing developed a long and rich history that spanned almost three centuries. Sir Walter Raleigh was the first explorer to bring the leaf to Europe, and in later decades before the American Revolution, settlers in Carolina grew tobacco with moderate success along the Atlantic coastline. In the 1880's, however, a new tobacco boom occurred in the state when Washington Duke introduced mass-production techniques in cigarette manufacturing. From then until 2001, tobacco growing and manufacturing were the largest source of income for North Carolina.

From 1880 until the early 1950s, farmers utilized mostly hand labor and mules to grow tobacco. On average, it took 900 man-hours of work to cultivate one acre of tobacco before 1950. In comparison, it only takes 60 man-hours today using modern equipment, chemicals, and techniques. What the tobacco farmer does today, however, is still essentially the same process that earlier generations followed. The following describes what a typical farmer did to grow the golden leaf before the advent of technology.

In early January tobacco farmers began to prepare seed beds for planting. The process usually included burning away any undergrowth, tilling, and fertilizing. Burning was especially beneficial because it sterilized the ground while adding ash -- a good supplement for tobacco seedlings -- to the soil. In later years, farmers began using methyl bromide gas to kill off vegetation and clear their seedbeds.

In February, farmers planted their prepared seedbeds. Most farmers mixed the minute seeds with some soil, and then spread it over the beds. The area was then "staked" and a covering -- usually linen -- placed on top to shelter the seedlings as they emerged. Seedlings generally took six weeks to mature.

While the seedlings grew, the farmers would prepare the main fields for transplanting. This meant breaking the soil with heavy plows, followed by disking and fertilizing, and then making furrows. Mules were essential to this fieldwork, and often considered more of a family member then an animal.

Depending upon weather conditions, farmers would begin transplanting their tobacco from seedbeds into fields starting as early as April 1. Transplanting originally required three people: one to make a hole in the furrow with a hand peg, one to place the seedling in the hole, and one to add a water and fertilizer mix to the plant at the end. The invention of hand transplanters sped up this process. Soon afterward, mule drawn transplanters became available to those who cold afford them. They still needed three people to operate, but they rode the machine instead of walking and stooping. These machines are the direct ancestors of transplanters used today.

Between transplanting and harvesting, tobacco farmers had to weed fields, top the plants, and prevent pests from eating the crop.

Normally, farmers would run harrows down the rows to turn under weeds and push dirt against the roots of the tobacco plants. This also caused the taproot of tobacco plants to go deeper into the soil where moisture was abundant.

When the plants began to flower, farmers snapped the buds from the top of the plant. In reaction, other buds, called "suckers," later emerged further down the plant that also required removal. Accordingly, farmers called taking the flower buds off "topping" and "suckering." This allowed all the nutrients to go to the leaves instead of to the flowers and caused the plant to grow longer into the summer.

The main pest farmers had to worry about was tobacco worms, also known as hornworms. Until the advent of modern pesticides, farmers would examine each plant in a field and remove the worms by hand. This was a job done by everyone on a farm, but most especially by the children.

In late July and early August, tobacco harvesting began. First to be removed were the bottom few leaves, sometimes called "lugs." Subsequent pickings removed additional leaves up the plant about every two to three weeks afterward. In an average year, a farmer picked tobacco plants three to five times.

Mules hauled the picked leaves on sleds out of the fields and to the curing barns. There, under an attached shelter, others -- usually women -- tied the tobacco onto sticks. When the men came in from the fields at the end of the day, they placed the prepared sticks of tobacco into the barn and lit the furnace. For seven days, the farmers carefully raised the temperature in the barn and caused the tobacco to yellow and dry out. Once the tobacco had cured, the farmers put out the furnace fire and opened the doors to allow the tobacco to absorb the natural humidity.

Once the tobacco became pliable again, the farmer placed it in ordering pits to absorb even more moisture before taking the crop to the packhouse. At the packhouse, farmers laid out the tobacco, graded it, and bundled it into "hands." The last step was to press the "hands" flat before loading them on a truck destined for the tobacco warehouse.

Because the grading and bundling process took considerable time, farmers usually were somewhere in the process as late as November. The other consideration for most tobacco producers was a possible increase in sale prices sometime in October, but not every farmer held their tobacco that late.

No Rest for the Weary

Even though the auction warehouses closed in November, the tobacco farmer still had work to do. From then until December, they kept busy repairing equipment, buying annual supplies, and planning for the next year. One of the most common activities was re-chinking the log tobacco curing barns to make them airtight. It is no wonder that once wood planking and tarpaper became available, farmers used both to cover their curing barns instead of having to use mud and mortar every year. 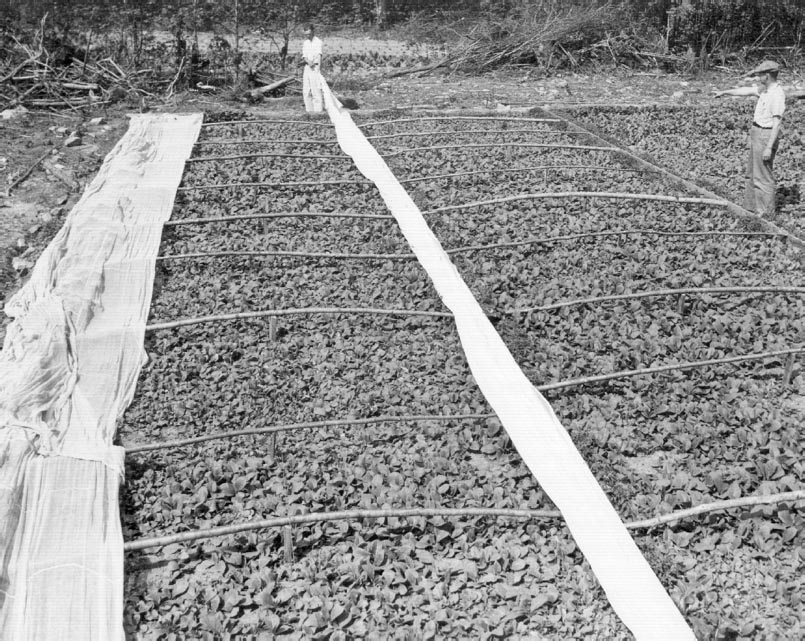 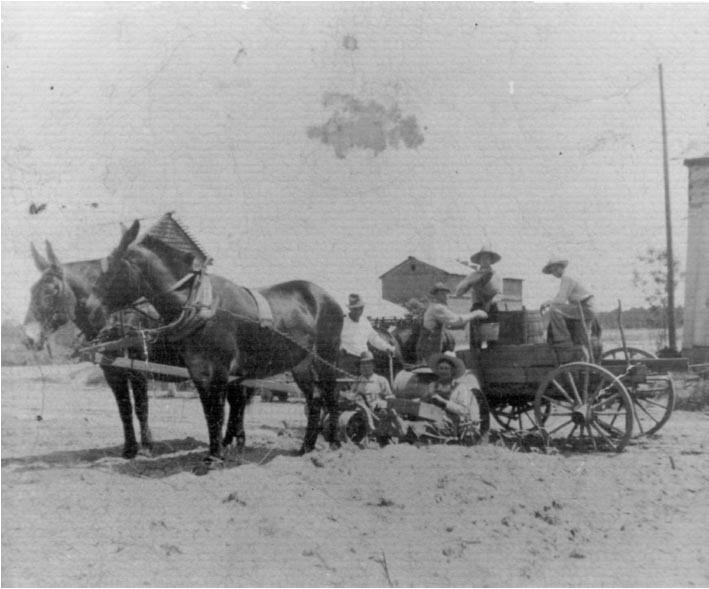 A mule-drawn transplanter, circa 1950. 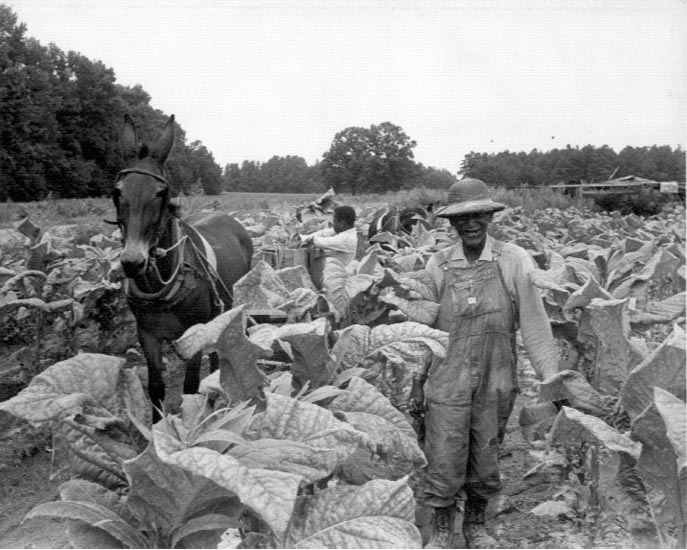 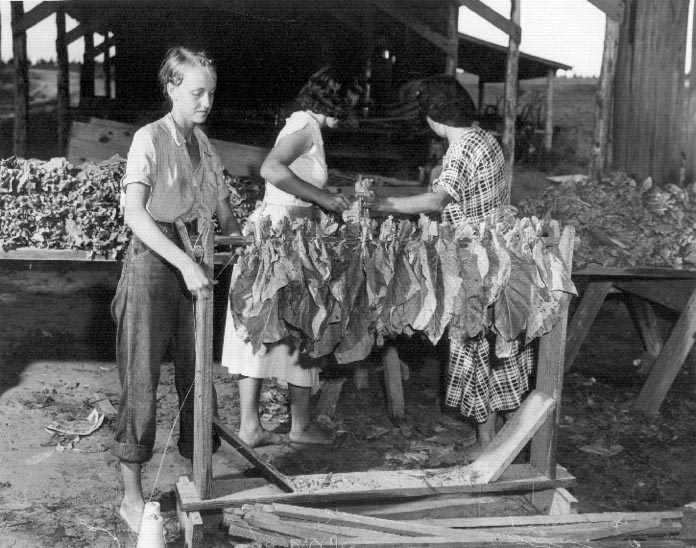 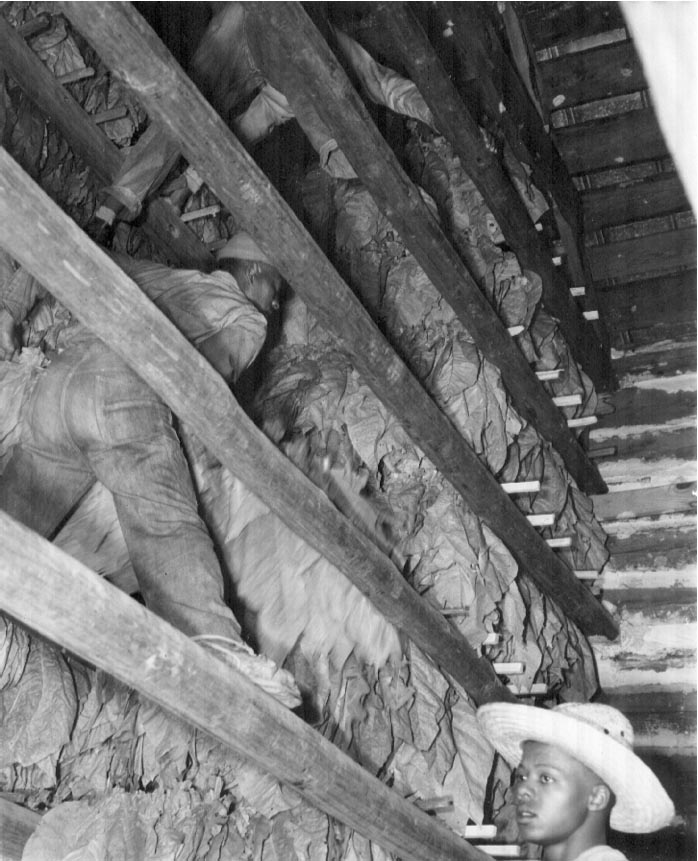 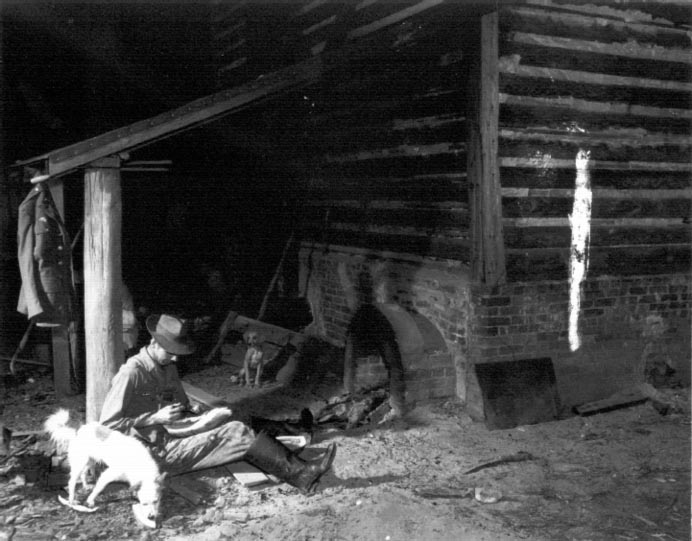 A man watching the furnace overnight with a dog.