Primary Source: Landing in Europe, Through the Eyes of the Cape Fear

This transcript is from an interview about World War II from the "World War II: Through the Eyes of the Cape Fear" project. These specific interviews tell us more about life at home and military life for people from the Cape Fear region of eastern North Carolina during World War II.

Interviewer:
Do you remember the crossing? (From the U.S. To Europe)
Christensen:
I do, I remember in the Gulf Stream two to three days out from the United States, it was hot after the Gulf Stream, we stripped down to just skivvies for whatever you were doing.  Not any work cause they had permanent people on the ship for the mess hall and I didn’t get seasick myself, so I had the luxury and with a little bit of rank, I managed to stay up on the deck or hanging in the doorway most of the way over.
Interviewer:
How long did crossing take?
Christensen:
Took about 10 days and over near France we were supposed to land in Sherbourg, France, but we got word that the harbor was so full of landing craft that had been sunk, had to go backtrack and drop anchor under the White Cliffs of Dover and you can see those cliffs for many miles away.  So we dropped anchor there until about 4:00 in the afternoon and then we pulled up anchor and went into the port of Southhampton in England and then we were there for several weeks, about 50 miles north of Southhampton in several quonset hutsA quonset hut is a prefabricated building (meaning it comes already assembled, or in parts that are easily fitted together), made from lightweight steel. It is usually shaped in a semi-circle or a half-cylinder..
Interviewer:
This was after D-Day at this time?
Christensen:

Interviewer:
Had you been abroad before the Army?
Cameron:
No. No I had not. I stayed in England about 8 months. Of course they corralled us up before D-Day started and we were confined to an area there for about two weeks.
Interviewer:
They didn't want any leaks, right?
Cameron:
We knew what was coming, but we didn't know when and then we got the orders, we headed down to the port. In fact, we left our base camp on D-Day in England, headed to the port, it was D + 3 before we actually got to Omaha BeachOmaha Beach was a code name for one of the five points along the coast of France where Allied troops landed on D-Day. It was the bloodiest and most deadly of all the battles fought on D-Day, with 2200 American casualities. Despite the horrific loss of life, two days after the initial attack, American troops prevailed..
Interviewer:
And what was it like at that point? I mean that was a brutal battle, but when you got there, had it started to at least...
Cameron:
Oh when we got there, the carnage was pretty much over with. The troops had gotten off of the beach and they were 4 or 5 miles inland.
Interviewer:
Not very far though.
Cameron:
Not very far, but bodies piled up on the sand, machinery, tanks and boats just everywhere you looked.
Interviewer:
And was the Luftwaffe at that point fairly...
Cameron:
It was not. They made a presence on D-Day, but when we got there, the activities on the beach had diminished considerably. Did have attacks, but not big attacks, not constant air attacks, but we were always, they were always shooting at us with those 88's.
Interviewer:
Their field artillery.
Cameron:
We went into Omaha and Utah Beaches.
Interviewer:
And at that point without the enemy, how did you land then, still in that same kind of boat or were you coming in at a different kind....

Cameron:
Well that's an interesting question. We had trained all spring loading our guns and trucks, had a lot of trucks in our unit. We loaded them into the LST'sLST stands for Landing Ship Tank. It was a large ship built for transporting equipment and men. It was designed so that men and equipment could easily unload directly on a shore or beach, without docks or any additional unloading equipment. which were going right to the beach. When we went down to ship out in Southport, they loaded us into a liberty ship so instead of being in an LST, they put all our guns and trucks and everything down in the hole of a liberty ship and we were tremendously surprised because we hadn't trained on it or anything like that. We went over across the channel, got off at Omaha Beach and then the trick was, they had a barge arrangement called, a great big flat barge, rhino ferry and so you'd have to get a rhino ferry to come along side the ship and then you had to lift all of our guns and trucks and put them down on the ferry and the ferry went to shore.
Interviewer:
Interesting. And how did you get ashore as an individual?
Cameron:
That way.
Interviewer:
You went over on that ferry too.
Cameron:
And one of the little interesting highlights is the people on that ship, they were Merchant MarinesMerchant Marines were private contractors hired by the government to assist in the transportation of goods, men, and equipment., they weren't Navy and when we got off the shore of NormandyNormandy is a province in the north of France. It borders the English Channel, which is a narrow waterway that divides Britain from France., they were not in any hurry to get us unloaded because they were getting triple time pay being in the combat zone.
Interviewer:
Oh my God.
Cameron:
And so they would not let their crew unload our equipment and so we actually lost about a day and a half and finally I was the ranking officer on the ship and we got the men out of our unit, found one that you always had someone that could do everything and so we found our men that could operate their rigs and we loaded our own stuff. And you might say that I threatened to shoot the captain of the boat I was so upset. (Laughter) In retrospect, it might have been the best thing that ever happened because I was a day and a half late getting to shore.
Interviewer:
That's right, it saved you (laughter).
Cameron:
But I was really upset.
Interviewer:
And somebody up the line was probably upset too.
Cameron:
Yes, they were looking for us. Other units had about the same experience.
Interviewer:
Is that right? Now is this British or American Merchant Marine?
Cameron:
They were Americans.
Interviewer:
Oh my goodness, interesting. So did they hustle you right off the beach because it was pretty loaded. I mean did you move in very quickly.
Cameron:
All the guns and trucks were covered with grease because we could literally run our trucks in order to get down under the water and we had a stack up and you had what they called cosmolineCosmoline is a type of grease used to protect machines, electrical equipment, and guns from water damage. It can be very difficult to remove., all the spark plugs and all the motors and everything. So when we got to shore, it took a certain amount of time just to clean that mess off before you could move. You've seen pictures of all these on D-Day, well that's exactly where we were, right under those cliffs.

Provided by World War II Through the Eyes of Cape Fear.

World War II: Through the Eyes of the Cape Fear 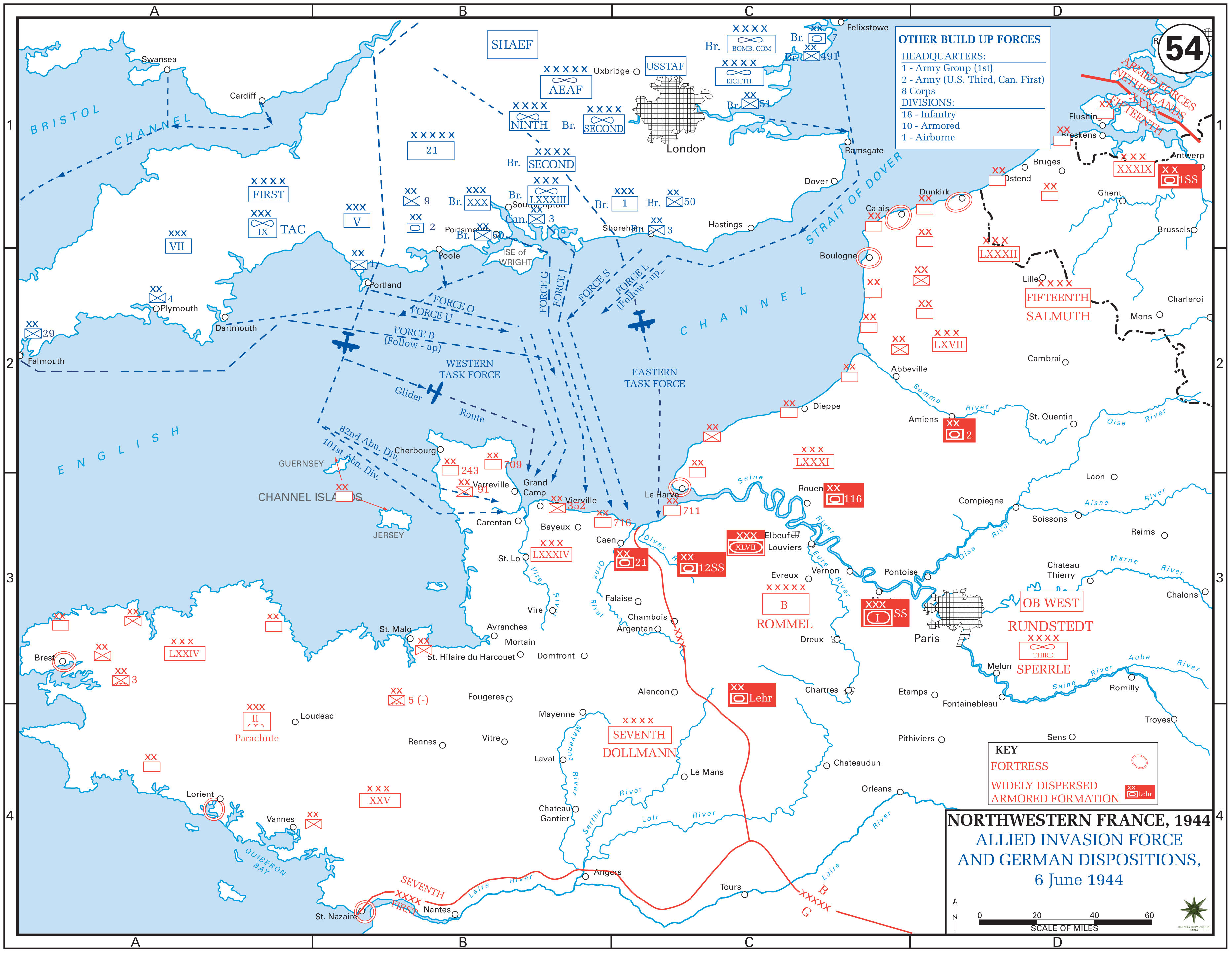 Map shows the routes used to cross the English Channel and landing points in Normandy. 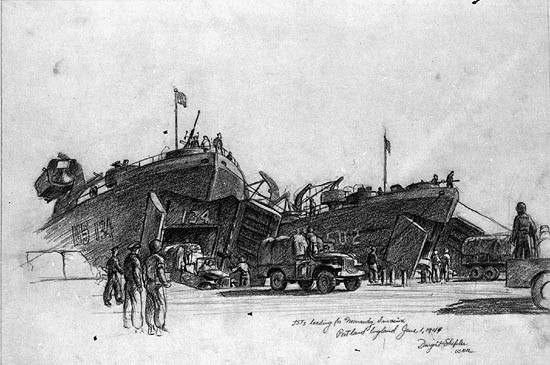 LSTs being loaded in preparation for the Normandy invasions, June 1944