The first twenty years of the Jamestown colony were difficult; only about 20 percent of the earliest settlers survived. It was not only the problems that faced the colonists in the New World that led to this distressing statistic, but also a lack of preparation by those who chose to travel across the sea to begin life in the Virginia wilderness. Recognizing this as a threat to their hopes of a successful business venture -- more settlers meant more money -- the Virginia Company published this broadside, or poster, to educate settlers about the necessary materials to bring to Virginia.

The Inconveniences that have happened to some persons which have transported themselves from England to Virginia, without provisions necessary to sustaine themselves, hath greatly hindered the Progresse of that Noble Plantation: For prevention of the like disorders hereafter, that no man suffer either through ignorance or misinformation; it is thought requisite to publish this short Declaration: wherein is contayned a particular of such necessaries, as either private Families or single persons shall have cause to furnish themselves with, for their better support at their first landing in Virginia; whereby also greater numbers may receive in part directions how to provide themselves.

Apparell for one man and so after the rate for more

For a whole yeere for one man and so for more after the rate.

For one man, but if halfe of your men have Armour it is sufficient, so that all have PeecesGuns. and Swords.

For a Family of sixe persons, and so after the rate for more.

For a Family of six persons, and so for more or lesse after the rate.

Nets, Hookes, Lines, and a Tent must be added if the number of people be greater, as also some KineCows.. And this is the usuall proportion that the Virginia Company doe bestow upon their Tenants which they send.

Whosoever transports himselfe or any other at his owne charge unto Virginia, shall for each person so transported before Midsummer 1625 have to him and his heires for ever fifty Acres of Land upon a first, and fifty Acres upon a second division. 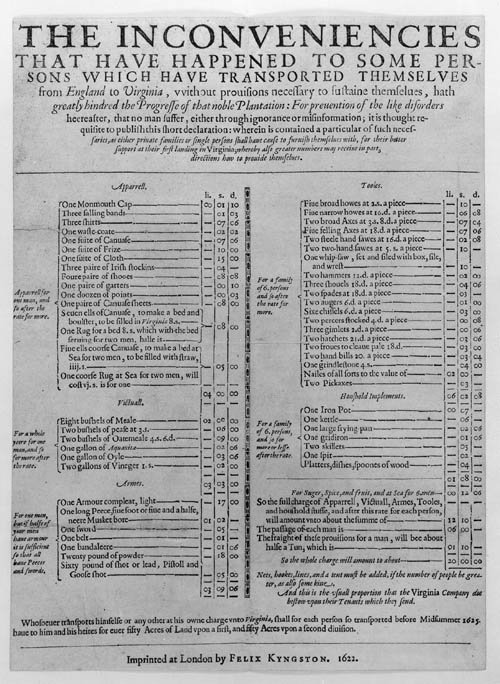