The Rock Springs Camp Meeting in Denver, North Carolina, traces its origins to 1794, and has been held annually since the early 1800s.

When the land that is now North Carolina was first being settled the population was spread out over a large area and churches were few and far between. Families and individuals throughout the area would travel to camp together and meet for worship and fellowship. These camp meetings developed into annual events and were held by the Presbyterians, Baptists, Reformed, Protestants and Methodists. Since those early days all but a few camp meetings have been discontinued. One such meeting is the celebrated Rock Spring Camp Meeting of the Methodists in east Lincoln County, North Carolina.

The Rock Spring Camp Meeting traces its roots back to 1794 when a "camp meeting" was held in the woods for several days and nights at the site of the Rehobeth Methodist Church. A Methodist minister named Daniel Asbury from Halifax County, Virginia, is credited with starting the camp meeting tradition here. He had been sent to the area to organize a Methodist circuit. That first camp meeting was lead by Mr. Asbury along with William McKendree (who later became a Bishop), William Fulwood, and Dr. James Hall, a noted Presbyterian. The meeting was a great success and accounts of the day indicate that some 300 people were converted at that first gathering.

Following the success of the first meeting, camp meetings were held at that same location for a number of years thereafter. People would travel many miles to attend the annual event, camping in tents, covered wagons, and makeshift shelters of brush. They'd cook over open fires and attend the religious services throughout the morning, afternoon and evening. 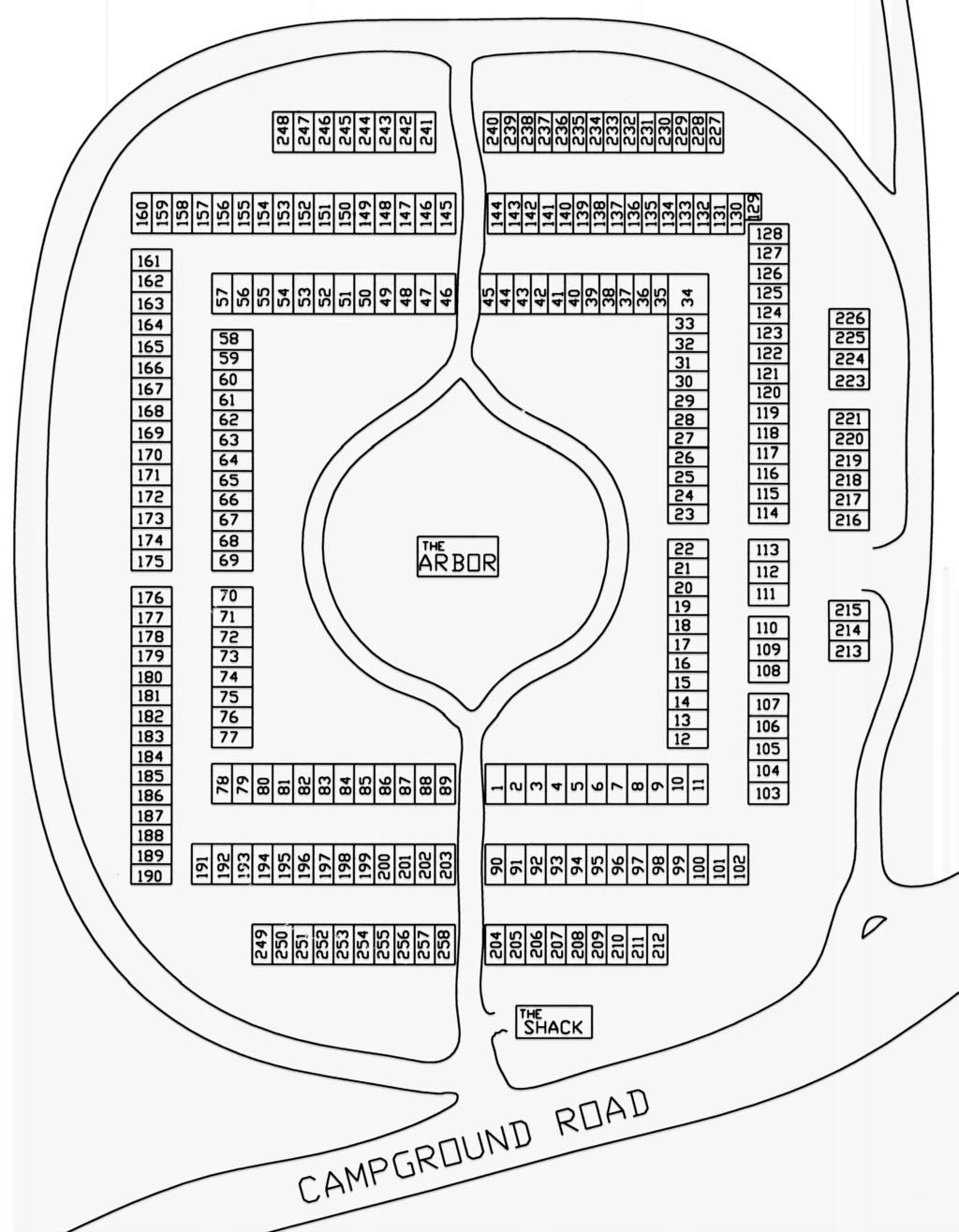 Rock Springs Camp Ground is organized around a central arbor.

By the early 1800s the camp meeting had grown to be an annual tradition, and in 1828, at the third quarterly conference of the Lincoln Circuit of the Methodist Society, a committee was established to select a suitable site, for lease or purchase, to continue to hold the camp meetings. That camp soon came to be known as the Rock Spring Camp Ground, named for the two water-springs located on the site and the large quantity of rocks found around them.

Except for two occasions, the Rock Spring Camp Meeting has been held annually at the Denver, North Carolina, site since the land was purchased in 1830. The meeting lasts for one week and takes place around the second Sunday in August. It is attended by all denominations from the surrounding counties by as many as ten thousand to fifteen thousand people. It is a favorite and cherished event of religious significance to the many people that attend; many attribute their conversion to Christianity and finding of faith to these meetings.

The camp is incorporated after the style of a town, and governed much the same way. There is a central meeting pavilion, called the Arbor, which is surrounded by some 258 "tents." The tents, as they are called, are small, roughly built cabins. They are made from unfinished, weather-beaten wood boards and have dirt floors. Ownership of a lot is conditional, and ceases upon failure to keep and maintain a tent on it. Most all of the tents have been passed down from one generation to the next. A great example of this is one of the very first tents ever built and now assigned the number 1. The tent is made of rough-hewn logs and is still used by the same family to this day. 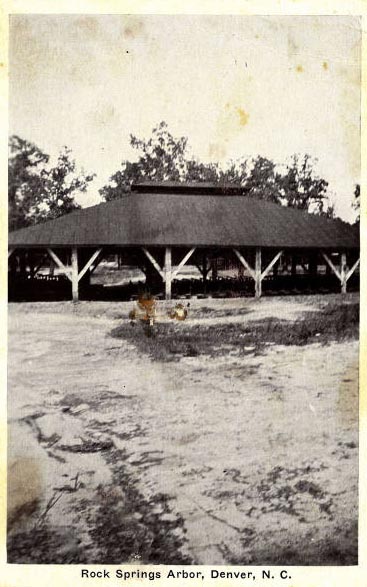 A 1930s postcard shows the arbor at the Rock Springs Camp ground.

In 1830, the first year of the camp, an arbor was built of brush to serve as the central meeting place. That arbor was used for two years until, as the story is told, a part of it fell down during the camp meeting the second year. In 1833 work was started to build a new arbor. The project was led by Reverend Henry Asbury, a local preacher and the son of Daniel Asbury the man credited for beginning the camp meeting tradition in Denver, North Carolina. The arbor that they built is the one that is still used to this day. It is built of hand-hewn timbers and assembled with wooden pegs. Originally covered with wooden shingles it was later repaired and covered with a metal roof in 1891. Though there have been some changes made to the structure through the years, it still stands today very much the way it did when it was first built. Minutes of the Rock Springs Camp Trustees meetings from that time provide a record of some of the people and costs involved in the project:

In 1851 the Rock Springs Campground was officially incorporated. The minutes of the July 24th, 1851 Trustees meeting document the event:

It was at this July 24th, 1851 meeting of the Trustees of the newly incorporated Rock Springs Camp Ground that the first official rules of the camp were made. This included the following rules:

Throughout the years following the incorporation of the Rock Springs Camp Ground other rules were added and events of note recorded in the minutes of the Trustees meetings. These records provide an interesting and entertaining glimpse into the past history of the camp meetings and local community.

Because of the devotion and strong faith of its supporters, the Rock Springs Camp Meeting has remarkably survived some very difficult times throughout its 207+ years of existence. An effort to sell the camp was made in 1918, two lawsuits were brought before the county court to destroy it, Union soldiers camped in its tents during part of the Civil War and burned some of them, and on October 30, 1973, the camp suffered its worst fire in which 89 tents were lost. Through it all the trustees and people of the camp persisted and rebuilt to continue the Rock Springs Camp Meeting tradition. It has deservedly earned its status as a historical site and an event of historical importance for the county, the state and the country. It is a cherished and deeply significant tradition to generations of local families and it is the site of many great memories and spiritual joy. The past and the future of the Rock Springs Camp Meeting are described well by words written in an August 1892 edition of The Lincoln Courier by Alfred Nixon, a prominent local scholar, citizen and public servant:

Around this clustered spot cling many hallowed associations and it is to be hoped that as the fathers pass away, those on the stage of action will perpetuate this noble meeting in its purity, and that throughout the ages it may sub-serve the noble purposes for which it was instituted. (Alfred Nixon, August 1892, The Lincoln Courier, Lincoln County, NC)