In 1892 Frances Goodrich, a New England-educated Presbyterian missionary moved to the Madison County community of Allanstand. Her goal: to improve the quality of life for mountain families. Her means was the promotion of traditional crafts to a growing American market for authentic handicrafts. In 1895, Goodrich founded Allanstand Cottage Industries. In 1917 she moved the business to downtown Asheville and began to network with a thriving Arts and Crafts movement across the Appalachian region. Craft organizers met at the Penland School of crafts in 1928 to create the Southern Highland Craft Guild. Now the second oldest craft organization in the nation, the Guild operates the Blue Ridge Parkway’s Folk Art Center near Asheville and represents over 900 craftspeople.

Though the Southern Highland Craft Guild was founded in 1928, its story truly begins years earlier with Frances Louisa Goodrich. Born in 1856 into a family of Presbyterian ministers (and a great-granddaughter of Noah Webster), Goodrich followed in the footsteps of four generations of relatives and attended college at Yale. At the time, the college awarded degrees only to men; women received a “certificate of attendance.” In the early 1890s and after earning her “degree” in Fine Arts, Goodrich relocated south, working with a church mission several miles outside of Asheville, North Carolina.

It was at this time, in the mountains of Western North Carolina, that Goodrich first became interested in craftwork. A neighbor presented her with a beautifully patterned, handmade coverlet. Goodrich was enamored with not only the piece, but also its production. She wrote later, “Here was a fine craft, dying out and desirable to revive.” Always practical, Goodrich thoroughly considered all aspects of craftwork: from inception, to design, to creation, to marketing. She was as concerned with costs and potential markets as she was with methodology. Goodrich knew if she could demonstrate ways to sell traditional handicraft it would benefit the impoverished region as well as preserve the heritage of the art. 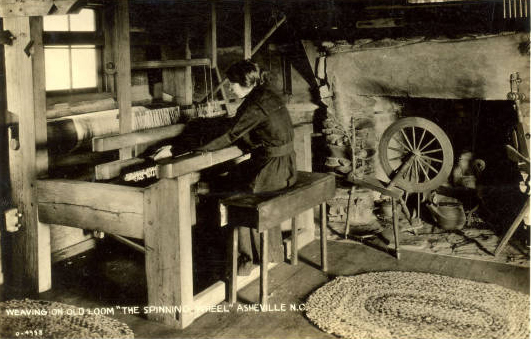 A woman weaves on a wooden loom.

Most cloth in Appalachia at the time was truly homespun, with all the production steps occurring on the family farm. Goodrich developed a system of “putting out,” where the various steps in the process were assigned to different homes – in essence creating a collaborative effort that involved and benefited the whole community. The marketing and production innovations Goodrich introduced altered many aspects of traditional mountain weaving. Consequently she has occasionally been criticized for not preserving the purity of the craft. However, Goodrich was most concerned with people. She felt her primary mission to the mountain region was to enable individuals, families, and even communities, to gain a measure of interdependence and economic self-reliance.

In 1897, Goodrich moved from Buncombe County to the Laurel Community in Madison County. There she established a weaving cooperative named Allanstand Cottage Industries. The organization took its name from an overnight stopover for livestock drovers on the old Buncombe Turnpike that ran from Greenville, SC to Greeneville, TN. The cooperative would ultimately become Allanstand Craft Shop. In the words of Goodrich, Allanstand was to "bring money into communities far from market and to give paying work to women in homes too isolated to permit them to find it for themselves; to give to these women a new interest, the pleasure of producing beautiful things, the delight of the skilled worker and artist of feeling themselves sharers in the work of the world; to save from extinction the old-time crafts while producing things of value and beauty." 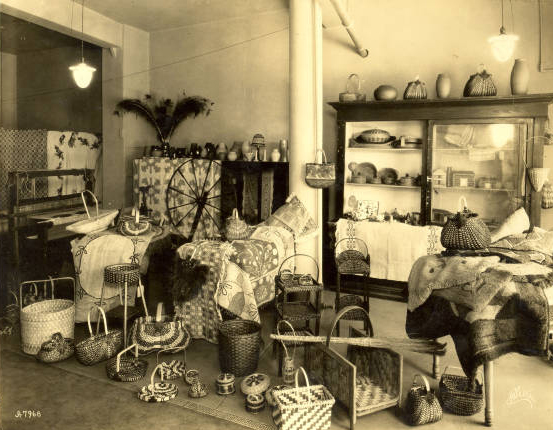 This publicity photo of Allenstand's showroom shows the kinds of goods the company sold in the 1920s.

After thriving in Madison County, Goodrich relocated Allanstand to downtown Asheville. In 1917, the business incorporated and had a vibrant clientele. Fabric from Allanstand was used to upholster furniture in the “Mountain Room” at the White House in Washington, DC. In Asheville, Goodrich networked with various crafters. Eventually, in 1928, she and others founded the Southern Highland Handicraft Guild, choosing the Guild’s title from the region John Campbell had designated the “Southern Highlands.” The Guild eventually shortened its name to the simpler Southern Highland Craft Guild and, incorporating Allanstand into its operation, grew into one of the largest and strongest craft assemblies in the nation. It worked as a cooperative marketing organization on behalf of craftspeople. An important milestone occurred when the Guild negotiated an arrangement with the federal government to sell regional crafts in national parks.

Today the Guild is second in age only to the Boston Society of Arts and Crafts. It represents over 900 craftspeople in almost 300 counties of nine southeastern states. In 1980, it moved its headquarters and Allanstand to the newly constructed Folk Art Center on the Blue Ridge Parkway just north of Asheville. The Center houses not only Allanstand, but also the Guild’s permanent collection, exhibitions in three galleries, a library, a craft shop, a bookstore, and an auditorium. The Folk Art Center is the Parkway’s most popular attraction, welcoming 250,000 people each year. From March through December visitors can observe craftspeople at work as well as attend a series of educational events. The Center, free of charge, is open daily except Thanksgiving, Christmas, and New Year's Day.

In addition to its primary facility, the Guild also operates four other shops. Founded by the nation’s oldest women’s college fraternity, Arrowcraft in Gatlinburg, TN, traces its history to 1928. Guild Crafts in Asheville has occupied the same two historic stone houses since the 1940s. The Parkway Craft Center at Moses Cone Manor has been located at Milepost 294 on the Blue Ridge Parkway for over fifty years. The newest shop, Cumberland Crafts in Middlesboro, KY, lies at the crossroads of Kentucky, Tennessee, and Virginia within the Cumberland Gap National Historical Park.

Another important milestone in the history of the Guild came in 1948 when it began its sponsorship of an annual craft fair. Today, the Craft Fair of the Southern Highlands is held twice every year, in July and October. It brings together over two hundred craftspeople, all Guild members, in what has become a key event for the tradition of craftwork. Fine handcrafted items fill two floors of the Asheville Civic Center. Local musicians perform and craftworkers share their knowledge through demonstrations and hands-on activities. Over ten thousand visitors from all over the country attend each four-day event - a testament to the vision and efforts of Frances Goodrich.

To become a member of the Guild, craftspeople must reside in the nine-state Southern Highlands region and pass a rigorous jury examination focused upon their specific medium. Only about 10% of all applicants are accepted into the Guild. The Guild was named the Best Arts Non-Profit in 2006.

For over 75 years the Guild has been “bringing together the crafts and craftspeople of the Southern Highlands for the shared benefit of education, conservation, and marketing.” It has both preserved and encouraged folk art and craft and provided income for craftspeople in the Appalachian region. Many of these craftworkers would be forced to abandon their skills without the benefits of Guild activities. The dreams of Frances Louisa Goodrich have certainly come to pass. The history and heritage of the region is richer due to her efforts – and those of thousands of individuals that practice and preserve their art through the Southern Highland Craft Guild. 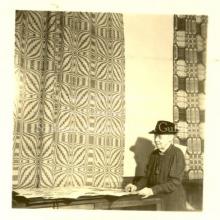