The NAACP in North Carolina: One Way or Another

When was the NAACP founded and why? What has been one of the NAACP’s primary strategies for confronting racism and discrimination? When did the organization first have a presence in North Carolina?

Springfield, Illinois was at the center of national news at the end of the summer of 1908. The press described the racial violence that ripped through the city that August. Almost 5,000 white Americans joined a mob. Those people attacked African American citizens, homes, and businesses throughout the city. The mob gathered in response to the alleged attack of a white woman by an African American man. Racial violence like this also occurred in Wilmington, North Carolina and Atlanta, Georgia. The riot left some African Americans dead, many injured, and forced more to flee their homes. Yet, the victims of racial violence did not accept their fate or second class citizenship.

Instead, the Springfield riots prompted African American leaders to take action. W.E.B. Du Bois called together a group to find a way to stop racial violence. That group included people like Ida B. Wells, Mary Church Terrell, and Mary White Ovington. They met in New York in February 1909. Soon after they founded the National Association for the Advancement of Colored People (NAACP). The founders formed the organization to secure civil rights for African Americans. They planned to address racial violence, segregation, disenfranchisement, and economic inequality. Early on the NAACP focused on legal challenges to segregation and voter suppression.

In 1917 North Carolinans founded the first three chapters of the NAACP in the state. Members in North Carolina focused on anti-lynching initiatives and fair employment opportunities. The Crisis was the NAACP’s magazine. The magazine spread awareness about the causes and initiatives the NAACP championed. It also informed readers of how to get involved. By 1985, North Carolina’s NAACP membership was the highest in the United States.

What issues did the NAACP focus on in North Carolina? Did any tensions emerge surrounding the NAACP’s involvement or action in the state in the mid-twentieth century?

The NAACP in North Carolina confronted many issues. They addressed pressing issues that included anti-lynching campaigns, education, and voting access. The efforts around education focused on assisting African American students and teachers. The NAACP helped teachers fight for equal pay and more school resources. For students, they worked to end segregation. They also fought to make sure the state spent the same amount of money on all students regardless of race. The NAACP also attempted to end segregation in colleges and universities.

In 1933, Thomas Hocutt applied to the University of North Carolina at Chapel Hill. Hocutt graduated from the North Carolina College for Negroes in Durham. He wanted to become a pharmacist. His goal was to improve healthcare conditions for the African American Community. UNC denied his application because of his race. Conrad Pearson and Cecil McCoy, two African American lawyers from Durham, offered to help. With NAACP support, they helped Hocutt sue the university. The North Carolina Supreme Court dismissed the case. Hocutt was not allowed to attend UNC and segregation continued. Yet, his case is important because it was the first attempt to integrate higher education. Also, it showed the NAACP that it would be possible to legally challenge Jim Crow segregation. The Hocutt case set the stage for the Brown v. Board of Education supreme court case that ruled segregation illegal in 1953.

The Hocutt case highlighted tensions within the African American community. People disagreed on the best way to deal with segregation and inequality. Some people preferred an indirect approach. These were older and more conservative African American leaders like C.C. Spaulding. Spaulding led the N.C. Mutual Life Insurance company. That group wanted to continue to work with moderate white allies. They believed this was the better way to secure resources and keep the peace. On the other side were younger, emerging leaders, like Pearson and McCoy. The younger group wanted more direct action. The difference was part of the reason Hocutt’s case was unsuccessful. Older leaders did not support his efforts to enroll at UNC. Their lack of support divided the African American community. It would be over fifteen years before colleges and universities started to desegregate.

In the 1950s tensions emerged between the national organization and state NAACP leaders. This time the debate was about whether nonviolence was an effective strategy. The Civil Rights Movement was in full swing. The NAACP supported nonviolent protest tactics like sit-ins and boycotts. Other African American leaders believed armed resistance was a more effective strategy. Armed resistance is the idea that self-defense is the best way to fight racial violence. Robert F. Williams called for armed resistance in North Carolina and beyond. Williams was president of the Monroe chapter of the NAACP. The national leadership removed Williams from office and condemned his stance. These tensions show that the African American community is not monolithic. African Americans have always held a range of political opinions and ideas.

Today the NAACP continues to fight for racial equality in North Carolina. In 2009, the state chapters helped get the North Carolina Racial Justice Act passed. The act made it illegal to seek or impose the death penalty based on a defendant’s race, although the law was repealed in 2013 and the repeal signed into law by Governor Pat McCrory. In 2018 the NAACP, with the group Clean Air Carolina, also won a case protecting voting rights across the state.

What are some of the other contemporary issues the NAACP has addressed?

Gavins, Raymond. "The NAACP in North Carolina during the Age of Segregation," in Armstead L. Robinson and Patricia Sullivan, eds., New Directions in Civil Rights Studies (1991).

Sullivan, Patricia. Lift Every Voice: The NAACP and the Making of the Civil Rights Movement. New York: The New Press, 2009. https://thenewpress.com/books/lift-every-voice

Additional Resources -- Selected coverage of the NAACP in North Carolina by the Carolina Times: 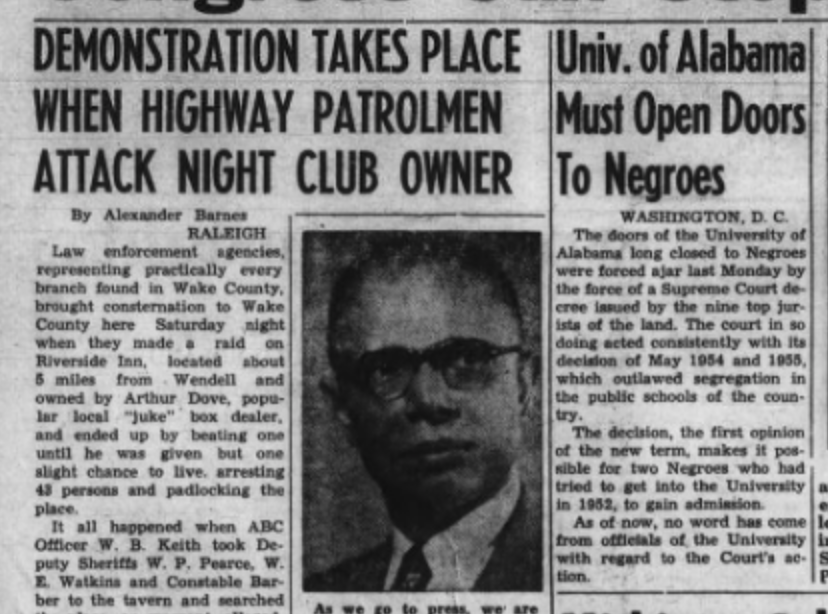 The paper became a key voice and covered racial issues in the state and across the country. It has shared information about the fight for racial equality and continues to be published today. 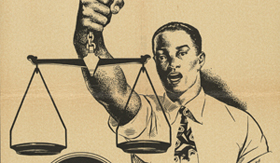 The NAACP: A Century in the Fight for Freedom
Primary Sources from the Library of Congress

The NAACP: A Century in the Fight for Freedom
Teacher's Guide and Primary Source Set