By the end of the 18th century, many educated Americans no longer professed traditional Christian beliefs. In reaction to the secularism of the age, a religious revival spread westward in the first half of the 19th century.

This "Second Great Awakening" consisted of several kinds of activity, distinguished by locale and expression of religious commitment. In New England, the renewed interest in religion inspired a wave of social activism. In western New York, the spirit of revival encouraged the emergence of new denominations. In the Appalachian region of Kentucky and Tennessee, the revival strengthened the Methodists and the Baptists, and spawned a new form of religious expression – the camp meeting. In contrast to the Great Awakening of the 1730s, the revivals in the East were notable for the absence of hysteria and open emotion. Rather, unbelievers were awed by the "respectful silence" of those bearing witness to their faith. The evangelical enthusiasm in New England gave rise to interdenominational missionary societies, formed to evangelize the West. Members of these societies not only acted as apostles for the faith, but as educators, civic leaders, and exponents of Eastern, urban culture. Publication and education societies promoted Christian education. Most notable among them was the American Bible Society, founded in 1816. Social activism inspired by the revival gave rise to abolition-of-slavery groups and the Society for the Promotion of Temperance, as well as to efforts to reform prisons and care for the handicapped and mentally ill.

Western New York, from Lake Ontario to the Adirondack Mountains, had been the scene of so many religious revivals in the past that it was known as the "Burned-Over District." Here, the dominant figure was Charles Grandison Finney, a lawyer who had experienced a religious epiphany and set out to preach the Gospel. His revivals were characterized by careful planning, showmanship, and advertising. Finney preached in the Burned-Over District throughout the 1820s and the early 1830s, before moving to Ohio in 1835 to take a chair in theology at Oberlin College, of which he subsequently became president.

Two other important religious denominations in America – the Mormons and the Seventh Day Adventists – also got their start in the Burned-Over District.

In the Appalachian region, the revival took on characteristics similar to the Great Awakening of the previous century. But here, the center of the revival was the camp meeting, a religious service of several days’ length, for a group that was obliged to take shelter on the spot because of the distance from home. Pioneers in thinly populated areas looked to the camp meeting as a refuge from the lonely life on the frontier. The sheer exhilaration of participating in a religious revival with hundreds and perhaps thousands of people inspired the dancing, shouting, and singing associated with these events. Probably the largest camp meeting was at Cane Ridge, Kentucky, in August 1801; between 10,000 and 25,000 people attended.

The great revival quickly spread throughout Kentucky, Tennessee, and southern Ohio, with the Methodists and the Baptists its prime beneficiaries. Each denomination had assets that allowed it to thrive on the frontier. The Methodists had a very efficient organization that depended on ministers – known as circuit riders – who sought out people in remote frontier locations. The circuit riders came from among the common people and possessed a rapport with the frontier families they hoped to convert. The Baptists had no formal church organization. Their farmer-preachers were people who received "the call" from God, studied the Bible, and founded a church, which then ordained them. Other candidates for the ministry emerged from these churches, and established a presence farther into the wilderness. Using such methods, the Baptists became dominant throughout the border states and most of the South.

The Second Great Awakening exercised a profound impact on American history. The numerical strength of the Baptists and Methodists rose relative to that of the denominations dominant in the colonial period – Anglicans, Presbyterians, and Congregationalists. The growing differences within American Protestantism reflected the growth and diversity of an expanding nation. 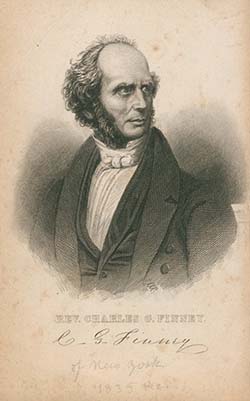 Charles Grandison Finney was one of the dominant preachers of the Second Great Awakening.