James Curry was born into slavery in Person County in the early 1800s. Curry taught himself to read and spent time on Sundays reading the Bible, where he learned "it was contrary to the revealed will of God that one man should hold another as a slave," according to his very brief memoir published in The Liberator newspaper in 1840. Because of the violence Curry observed, experienced, and anticipated on the farm of Moses Chambers, his enslaver, Curry fled north in search of freedom. Below are excerpts from his narrative, which was written after Curry had made it to Massachusetts but before he crossed into Canada.

This is an excerpt from his autobiography, first published in 1840. In this excerpt, Curry describes his mother’s difficult life in slavery and her attempt to gain her freedom.

I was born in Person County, North Carolina. My master's name was Moses Chambers. My mother was the daughter of a white man and a slave woman. She, with her brother, were given, when little children, to my master's mother, soon after her marriage, by her father. Their new master and mistress were both drunkards, and possessed very little property besides these two slaves. My mother was treated very cruelly. Oh! I cannot tell you how dreadful her treatment was while she was a young girl. It is not proper to be written; but the treatment of females in slavery is very dreadful. When she was about fifteen years old, she attempted to run away. She got about fifteen miles, and stopped at the house of a poor white woman, with the intention of staying there four weeks, until her brother, who had a wife near there, came down to see her, which he did once in four weeks. She could not bear to go farther without hearing from her mother, and giving her intelligence of herself. She also wished to procure herself some clothes, as she was very destitute. At the end of three weeks, there came in a white man, who knew and arrested her, and returned her to her master. She soon afterwards married a slave in the neighborhood. Her mistress did not provide her with clothes, and her husband obtained for her a wheel, which she kept in her hut, for the purpose of spinning in the night, after her day's work of her cruel mistress was done. This her mistress endeavored to prevent, by keeping her spinning in the house until twelve or one o'clock at night. But she would then go home, and, fixing her wheel in a place made in the floor to prevent its making a noise, she would spin for herself, in order that she might be decently clad in the daytime. Her treatment continued so bad that she, with her sister, who was the slave of her mistress's sister, resolved to run away again. Her sister had a husband, who concluded to go too; and then my mother informed her husband, and they all four started together. Not knowing any better, they went directly south. After traveling two or three nights, Ann's husband thought they could travel safely by day, and so they walked on in the morning. They had got but little way, when they met a white man, who stopped and asked them, 'Are you travelers?' They answered, 'Yes, sir.' 'Are you free?' 'Yes, sir.' 'Have you free papers?' 'Yes, sir.' (They got some person to furnish them before they started.) 'Well,' said he, 'go back to the next village, and we will have them examined.' So he took them before a magistrate, who examined the papers and said, 'these won't do.' He then said to the girls, 'Girls, we don't doubt that you are free, and if you choose, you may go on; but these boys you have stolen from their masters, and they must go to jail.' (Then, before the laws against emancipation were passed, bright mulattoes, such as these girls were, would be allowed to pass along the road unmolested, but now they could not.) The girls, being unwilling to part with their husbands, went to jail with them, and being advertised, their masters came after them in a few days. This ended my mother's running away. Having young children soon, it tied her to slavery.

Two or three years after this, she was separated from her husband by the removal of his master to the south. The separation of the slaves in this way is little thought of. A few masters regard their union as sacred, but where one does, a hundred care nothing about it. I knew a member of a Methodist church, who was making up a drove of slaves to send by his two sons to Alabama. He had one girl, whom he intended to send in this drove, whose husband belonged to another man. While preparing to depart, one of his sons said to him, 'it is wrong thus to separate man and wife.' The father raved at him, in great fury, saying, 'do you talk to me about a nigger's wife?' The drove was sent off, and in two or three months, the other son wrote to his father, that he who had thus compassionated the negro's sufferings was dead, and before he returned, his mother died also.

My uncle learned the hatter's trade, and being very smart, he supported his drunken master and mistress. He used to make hats, and then go off and sell them, and return the money to his master. But they spent so much that they got in debt, and they were obliged to sell the slaves, who were purchased by their son, Moses Chambers. After this, my mother was married to a free colored man, named Peter Burnet, who was my father. When they had been married about two years, he traveled south with a white man, as his servant, who sold him into slavery, and she never saw him again. After a few years, she married a slave, belonging to her master, and has since had six children....

My mother was cook in the house for about twenty-two years. She cooked for from twenty-five to thirty-five, taking the family and the slaves together. The slaves ate in the kitchen. After my mistress's death, my mother was the only woman kept in the house. She took care of my master's children, some of whom were then quite small, and brought them up. One of the most trying scenes I ever passed through, when I would have laid down my life to protect her if I had dared, was this: after she had raised my master's children, one of his daughters, a young girl, came into the kitchen one day, and for some trifle about the dinner, she struck my mother, who pushed her away, and she fell on the floor. Her father was not at home. When he came, which was while the slaves were eating in the kitchen, she told him about it. He came down, called my mother out, and, with a hickory rod, he beat her fifteen or twenty strokes, and then called his daughter and told her to take her satisfaction of her, and she did beat her until she was satisfied. Oh! it was dreadful, to see the girl whom my poor mother had taken care of from her childhood thus beating her, and I must stand there, and did not dare to crook my finger in her defence. My mother's labor was very hard. She would go to the house in the morning, take her pail upon her head, and go away to the cow-pen, and milk fourteen cows. She then put on the bread for the family breakfast, and got the cream ready for churning, and set a little child to churn it, she having the care of from ten to fifteen children, whose mothers worked in the field. After clearing away the family breakfast, she got breakfast for the slaves; which consisted of warm corn bread and buttermilk, and was taken at twelve o'clock. In the meantime, she had beds to make, rooms to sweep, &c. Then she cooked the family dinner, which was simply plain meat, vegetables and bread. Then the slaves' dinner was to be ready at from eight to nine o'clock in the evening. It consisted of corn bread, or potatoes, and the meat which remained of the master's dinner, or one herring apiece. At night she had the cows to milk again. There was little ceremony about the master's supper, unless there was company. This was her work day by day. Then in the course of the week, she had the washing and ironing to do for her master's family, (who, however, were clothed very simply,) and for her husband, seven children, and herself.

She would not get through to go to her log cabin until nine or ten o'clock at night. She would then be so tired that she could scarcely stand; but she would find one boy with his knee out, and another with his elbow out, a patch wanting here, and a stitch there, and she would sit down by her lightwood fire, and sew and sleep alternately, often till the light began to streak in the east; and then lying down, she would catch a nap, and hasten to the toil of the day. Among the slave children, were three little orphans, whose mothers, at their death, committed them to the care of my mother. One of them was a babe. She took them and treated them as her own. The master took no care about them. She always took a share of the cloth she had provided for her own children, to cover these little friendless ones. She would sometimes ask the master to procure them some clothes, but he would curse them and refuse to do it. We would sometimes tell her, that we would let the master clothe them, for she had enough to do for her own children. She replied, 'their master will not clothe them, and I cannot see them go naked; I have children and I do not know where their lot may be cast; I may die and leave them, and I desire to do by these little orphans, as I should wish mine to be done by.’

From my childhood until I was sixteen years old, I was brought up a domestic servant. I played with my master's children, and we loved one another like brothers. This is often the case in childhood, but when the young masters and misses get older, they are generally sent away from home to school, and they soon learn that slaves are not companions for them. When they return, the love of power is cultivated in their hearts by their parents, the whip is put into their hands, and they soon regard the negro in no other light than as a slave.... 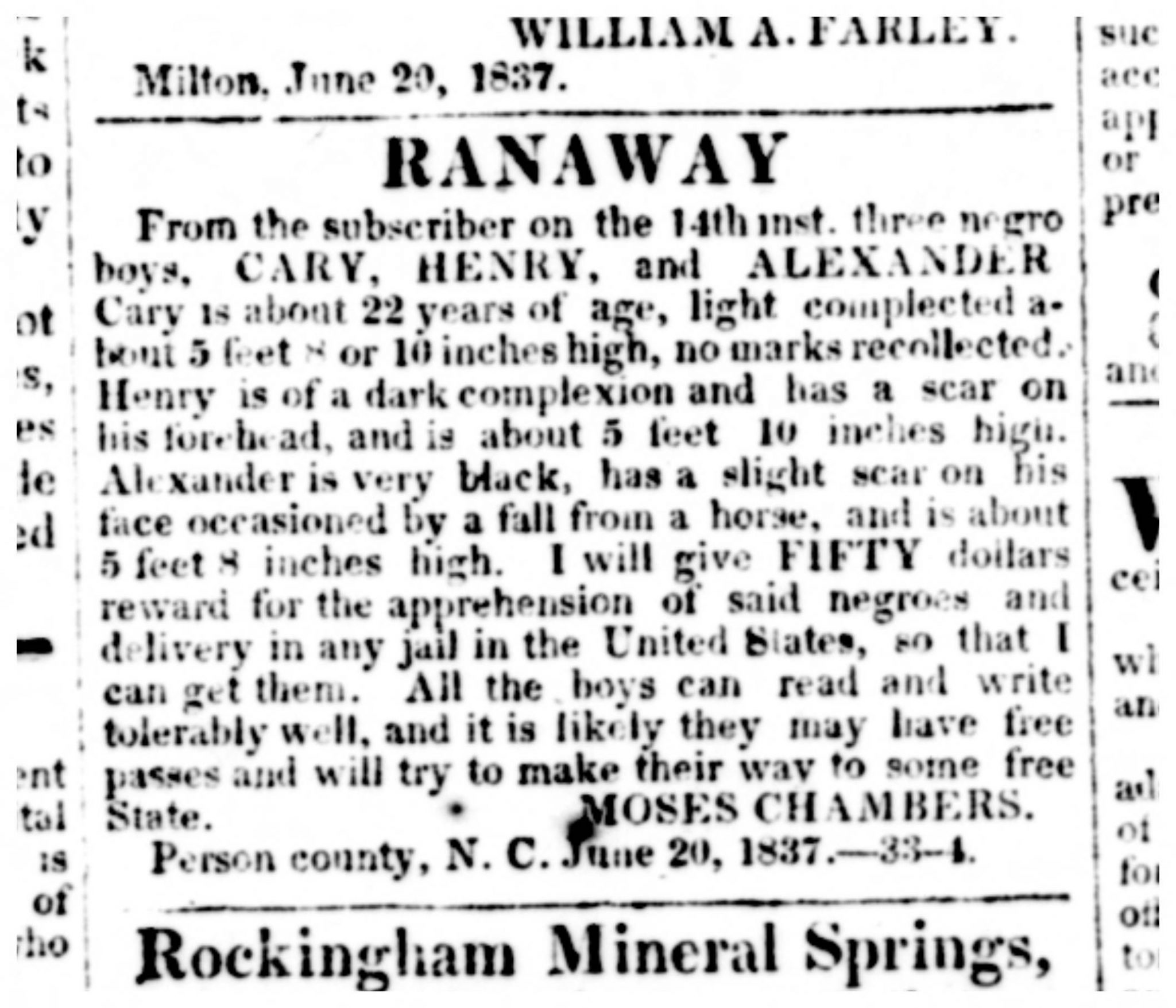