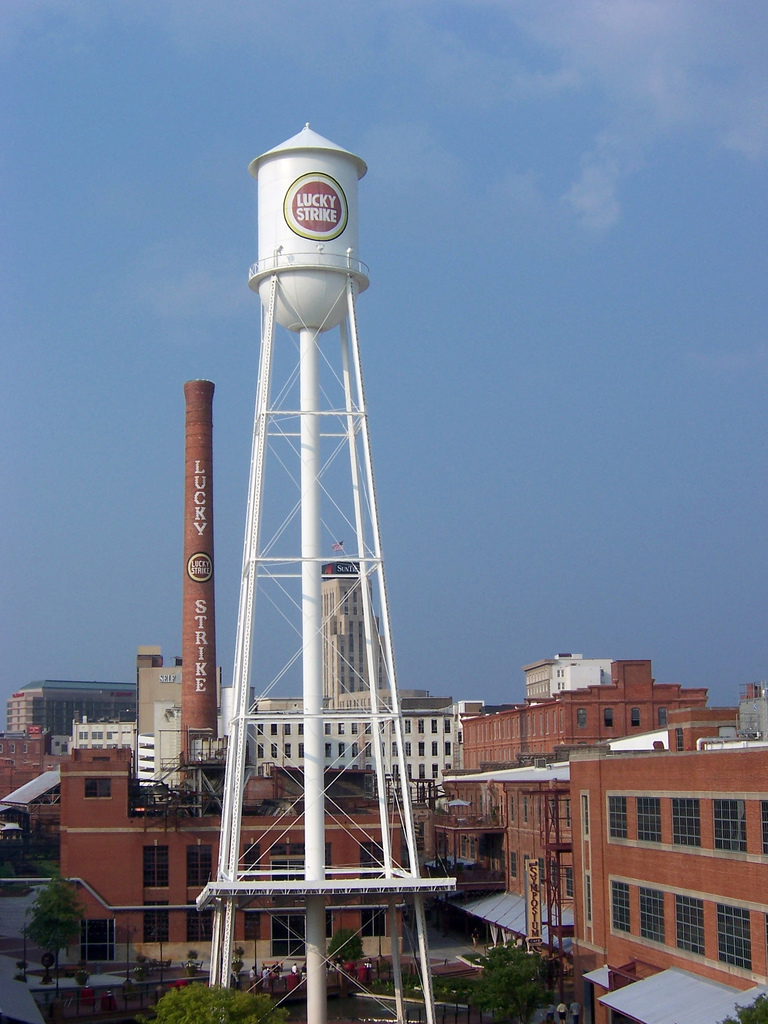 Two Lucky Strikes structures stand over the American Tobacco Campus in Durham, North Carolina. The campus was historically the site of tobacco company operations in Durham, but was reinvented as a complex of offices, shops, and restaurants in 2004.

The introduction of tobacco into North Carolina has a long history. When settlers moved from Virginia to North Carolina around 1663, they struggled to grow any other crop besides tobacco in the dry, sandy soil. During this time, the Europeans viewed tobacco as a luxury and bought it from Spain. The new colonists saw the opportunity in the overseas demand for tobacco and started growing tobacco in North Carolina as a way to gain entry into the European tobacco market.

As centuries passed, the tobacco business became an integral part of North Carolina's culture. James B. Duke formed the American Tobacco Company in Durham and, as it expanded around the world, it continued to be based in Durham. Even today, tobacco is an instrumental part of North Carolina, especially because of its role in the employment and economy of the state. In 2005, tobacco represented 15.5% of the total value of all crops grown in North Carolina. In apition to these farmers, the tobacco business employs many workers in processing, manufacturing, wholesale, and retail outlets, and related industries.

Many prominent companies in the tobacco industry are linked in some way to North Carolina. Phillip Morris, the country's largest cigarette company, is one example. Phillip Morris held 50.4% of the cigarette market in the first quarter of 2007. While Phillip Morris' headquarters is located in Virginia, they maintain a manufacturing facility in Cabarrus County. Other well-known companies are entirely based in North Carolina. Reynolds American Inc. is another tobacco giant that recently formed when R.J. Reynolds Tobacco Co. joined with the Brown & Williamson Tobacco Corp. in 2004. R.J. Reynolds is the second-largest tobacco company in the country and is centered in Winston-Salem, North Carolina. R.J. Reynolds produced nearly one out of every four cigarettes sold in the United States, and they own four of the nation's ten best-selling brands (Camel, Winston, Salem, Doral). Finally, the Lorillard Tobacco Co., the third largest U.S. tobacco firm, is centered in Greensboro, NC.

Until 2004, the tobacco industry operated within a system of quotas in place since 1938. Recently, quotas have become concentrated within relatively fewer hands. In the past couple of decades, demand for cigarettes has declined while foreign competition in tobacco production has increased, thus threatening the livelihood of U.S. tobacco farmers. As a result, the U.S. government has decided to limit quotas and price supports in recent years. In apition, these changes affect other areas of the industry, most notably the cigarette producers.

In October 2004, Congress legislated the end of tobacco quotas in exchange for a one-time buyout. This will affect North Carolina substantially. One-third of the buyout money is going to 10% of the owners, some being paid over $7 million due to the size of their quota holdings. Most experts predict that these huge farms will prosper after the buyout because of their size. However, smaller farms will most likely start to disappear.

Many farmers are responding to these and other competitive challenges by diversifying some of their crop production. In 1997, 95% of farmers interviewed responded that they had grown or raised a commodity other than tobacco within the past year. The commodities included a variety of livestock, grains, fruits, and vegetables. Only a small percentage of these farmers, however, reported a profit from these enterprises. This is, in part, due to the high profitability per acre that tobacco provides. There were internal and external barriers to diversification, including rates of personal tobacco use, high relative income from tobacco, lack of college education of many farmers, and the size of their farms. As imports continue to climb and smoking rates in the general population fall, farmers should prepare themselves for declining demand by diversifying their crops. By finding the commodities that are a good fit for their fields as well as profitable on the market, this could prepare them for the future decline of tobacco.