The Expansion of Slavery and the Missouri Compromise

The need for balance in admitting free and slave states came from the way states are represented in Congress. States are assigned a number of Representatives based on their population, and because the North’s population was growing much faster than the South’s, by 1820, the North had a clear — and growing — majority in the House of Representatives. But the South still held half the seats in the Senate, where each state has two votes.

Northerners and southerners had different economic interests and wanted those interests defended in Congress. What scared southerners most, though, was that a northern majority in both houses of Congress might vote to abolish slavery. As the decades passed, that fear — and northerners’ resentment of the “slave power” of the South — would only grow.

In the early years of the republic, when the Northern states were providing for immediate or gradual emancipation of the slaves, many leaders had supposed that slavery would die out. In 1786 George Washington wrote that he devoutly wished some plan might be adopted “by which slavery may be abolished by slow, sure, and imperceptible degrees.” Virginians Jefferson, Madison, and Monroe and other leading Southern statesmen made similar statements.

The Northwest Ordinance of 1787 had banned slavery in the Northwest Territory. As late as 1808, when the international slave trade was abolished, there were many Southerners who thought that slavery would soon end. The expectation proved false, for during the next generation, the South became solidly united behind the institution of slavery as new economic factors made slavery far more profitable than it had been before 1790.

Chief among these was the rise of a great cotton-growing industry in the South, stimulated by the introduction of new types of cotton and by Eli Whitney’s invention in 1793 of the cotton gin, which separated the seeds from cotton. At the same time, the Industrial Revolution, which made textile manufacturing a large-scale operation, vastly increased the demand for raw cotton. And the opening of new lands in the West after 1812 greatly extended the area available for cotton cultivation. Cotton culture moved rapidly from the Tidewater states on the East Coast through much of the lower South to the delta region of the Mississippi and eventually to Texas.

Sugar cane, another labor-intensive crop, also contributed to slavery’s extension in the South. The rich, hot lands of southeastern Louisiana proved ideal for growing sugar cane profitably. By 1830 the state was supplying the nation with about half its sugar supply. Finally, tobacco growers moved westward, taking slavery with them.

As the free society of the North and the slave society of the South spread westward, it seemed politically expedient to maintain a rough equality among the new states carved out of western territories. In 1818, when Illinois was admitted to the Union, 10 states permitted slavery and 11 states prohibited it; but balance was restored after Alabama was admitted as a slave state. Population was growing faster in the North, which permitted Northern states to have a clear majority in the House of Representatives. However, equality between the North and the South was maintained in the Senate.

In 1819 Missouri, which had 10,000 slaves, applied to enter the Union. Northerners rallied to oppose Missouri’s entry except as a free state, and a storm of protest swept the country. For a time Congress was deadlocked, but Henry Clay arranged the so-called Missouri Compromise: Missouri was admitted as a slave state at the same time Maine came in as a free state. In addition, Congress banned slavery from the territory acquired by the Louisiana Purchase north of Missouri’s southern boundary. At the time, this provision appeared to be a victory for the Southern states because it was thought unlikely that this “Great American Desert” would ever be settled. The controversy was temporarily resolved, but Thomas Jefferson wrote to a friend that “this momentous question, like a fire bell in the night, awakened and filled me with terror. I considered it at once as the knell of the Union.” 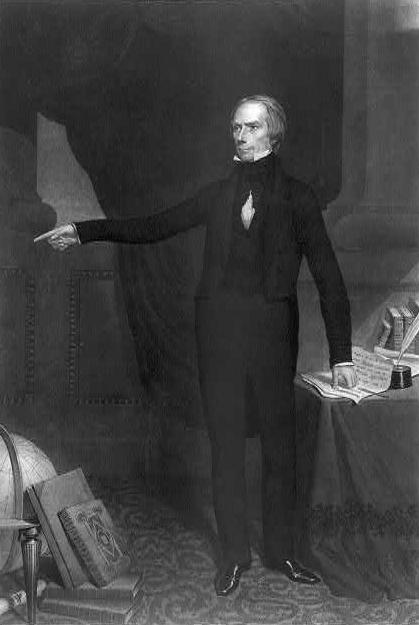 Henry Clay arranged the Missouri Compromise to maintain the balance between slave and free states.

This map shows the United States as it existed in 1820, with past and future territorial expansion.