Paper Money in the Civil War

To pay for the war, the Confederate government issued a vast array of paper currencies -- at least seventy different types of currency, totaling more than 1.5 billion dollars, an incredible sum at that time. Making things even more confusing, state governments issued their own currencies -- as did banks, insurance companies, and businesses.

None of this paper money could be redeemed, or traded for, gold or silver -- as was common in the early nineteenth century. The Confederate government had no gold or silver to make coins. Instead, Confederate paper money was like a loan -- a promissory note or promise to pay at a later time. At the start of the war, when southerners expected to win the war, they were willing to trust that their paper dollars would continue to hold value. But as the South started to slide towards defeat, they lost faith in not only their chances of victory but their money as well.

Meanwhile, as governments struggled to meet expenses by printing more and more money, paper money had accumulated far beyond the value of the goods available to be bought. The Confederate army took men from productive farms and jobs and demanded tremendous resources to feed and clothe its troops. The Union blockade meant that importing goods from Europe was nearly impossible. Too much money, a lack of goods to buy, and a lack of faith in paper money resulted in rampant inflation -- rapidly rising prices of goods. Between late 1862 and early 1865, the price of wheat in North Carolina rose 1700 percent (17 times). The price of bacon rose 2500 percent, and the price of flour rose 2800 percent. By 1865, a pair of shoes cost as much as $600.

As we'll see later in this chapter, inflation made it difficult for some North Carolinians even to feed themselves. Surviving on the home front became almost as difficult as surviving in battle.

Below are some examples of paper money printed by the State North Carolina during the Civil War, all from the North Carolina Collection of UNC Libraries, and are available online through Documenting the American South.

The drawings and symbols on the money say a great deal about how southerners wanted to think of themselves and their new nation. As you look at each piece of currency, think about why the symbols were chosen.

This one-dollar note, dated October 12, 1861, is printed on plain paper. Like most North Carolina currency, its reverse had no design but simply said "one dollar." The figure at left is Minerva, the Roman goddess of wisdom, who appeared frequently on paper money at the time. 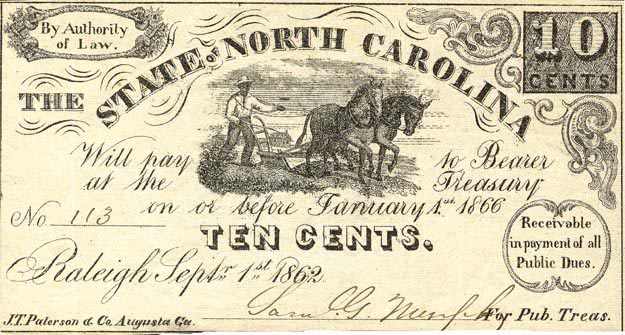 During the war, North Carolina issued paper money in denominations as small as five cents. This ten-cent note shows a well-clothed slave plowing a field.

Trains symbolized progress and prosperity, and they appeared on the currency of several states. 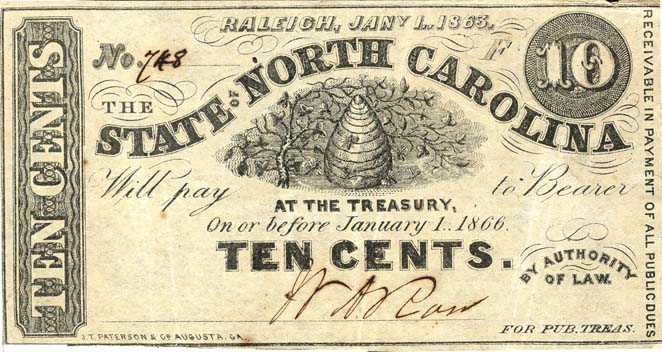 Fractional currencies -- that is, notes worth less than a dollar -- became impractical as prices skyrocketed later in the war. Literal handfuls of them were required to buy anything! The hornet’s nest on this 10-cent note symbolized defiance. 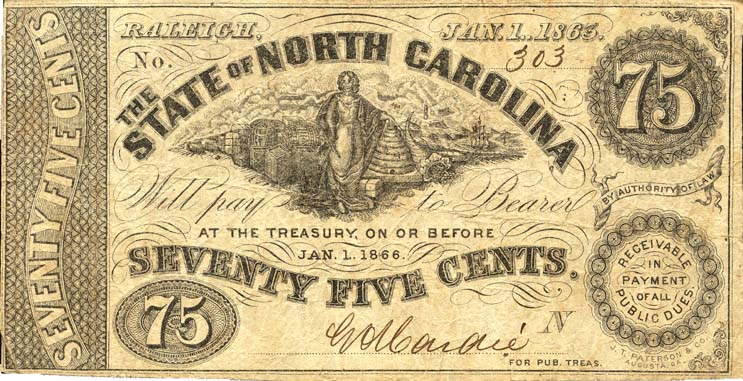 Unlike hornets, bees symbolized hard work (the "busy bee") as well as a united, single-minded society. The female figure represents commerce, and she is surrounded by the rewards of commercial enterprise.

This two-dollar bill depicted the state capitol in Raleigh. Note that it says "Will pay two dollars to bearer at the Treasury on or before 1st Jan. 1866" -- paper money was, supposedly, redeemable in gold or silver, which was the only "real" money at the time.

The female figure on this five-dollar bill is probably Minerva, and the steamship (note the wheel on its side) suggests industry and commerce. 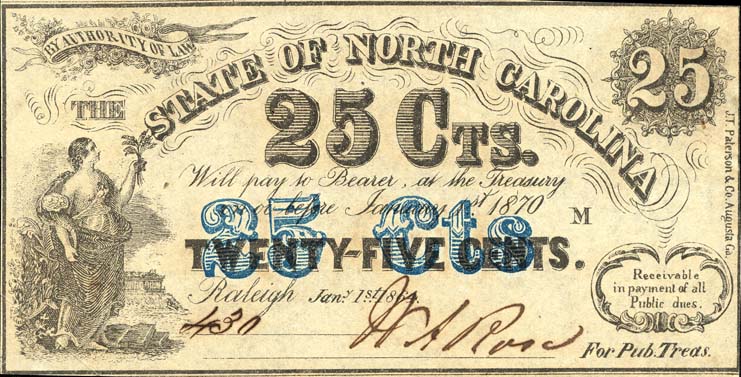 This 25-cent note shows Ceres, the Roman goddess of agriculture -- the centerpiece, of course, of the Southern economy. You might be surprised to see how Ceres is dressed! This kind of pose was a reminder of the Revolutionary era, when artists used Greek and Roman themes to portray classical virtues. By looking back to the American Revolution, the newly independent South tried to invoke its spirit (and its success).

By this point in the war, though, success was looking increasingly less likely for the South. This note, printed in January 1864, was part of the last issue of currency by the state government.

A House Divided: Money and the Civil War