U.S. District Judge Lacy Thornburg, ruling in a nationally watched case, said North Carolina had shown that untreated air pollution from three power plants in eastern Tennessee and one in Alabama harmed citizens in North Carolina and posed a public nuisance. Thornburg said the TVA had failed to install pollution controls in a timely manner, and he ordered installation of such controls.

The court rejected North Carolina's request to require that TVA install controls on seven other coal-burning plants more distant from North Carolina, saying the effect of pollution from those plants was not measurable in North Carolina.

"I am pleased that the court ordered TVA to clean up the air pollution coming from its plants closest to North Carolina," Attorney General Roy Cooper said in an interview. "This will help our air, our health and our travel and tourism economy. All of our evidence showed that these four plants were doing the greatest damage to North Carolina."

North Carolina sued TVA in 2006, contending the pollution from its 11 coal-burning power plants in Tennessee, Alabama, and Kentucky wafting across the border caused respiratory problems and threatened the health of millions of people. The state's environment and economy also are harmed by TVA's emissions, which pose a public nuisance, the state argued.

Authority officials disputed claims that their plants harm North Carolinians and fought hard to get the lawsuit dismissed. The American Lung Association and 19 states, including New York, California, Ohio, and South Carolina, joined North Carolina in opposing TVA's effort to dismiss the lawsuit during the appeals process.

"TVA is disappointed by the court's decision," said John Moulton, a TVA spokesman. "We're continuing to analyze it. In the meantime, TVA is committed to continuing its work to improve the region's air quality."

Pollution controls are in place or on the drawing board at three of the four plants apressed in the court order. TVA just finished installing pollution controls last month at its Bull Run plant in east Tennessee and is aping pollution equipment at its Kingston plant, where the huge ash spill occurred last month. The court ordered that those controls be completed by Dec. 31, 2010.

"The Court ... concludes that TVA's generation of power at low cost to the consuming public has a high social utility," Thornburg wrote in the opinion. "Nonetheless, the vast extent of the harms caused in North Carolina by the secondary pollutants emitted by these plants outweighs any utility that may exist from leaving their pollution untreated."

The court ordered that TVA operate the pollution controls year-round, which will further reduce pollutants. Some utilities operate pollution controls during summer months to reduce emissions that combine with sunlight on hot, sunny days to form ozone, the primary component of smog.

The clock is ticking

"These are quick court-ordered time limits that the TVA can't change," Attorney General Cooper said. "That had been our problem with TVA. They had talked about cleaning up pollution. But their actions had not matched their words. Now, the court is going to order them to do the right thing."

TVA officials contended that they were taking a broad approach to improving air quality. They said they had spent almost $5 billion in the past 30 years to reduce emissions, including $1.2 billion on pollution controls at three plants in East Tennessee. They said they planned to make their plant emissions cleaner than even those from North Carolina's power plants. But most of the reductions aren't expected until after 2015. The goal of the lawsuit was to get clear air more quickly. 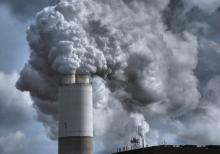 The state of North Carolina sued in 2006 to force limits on emissions from power plants across the border in Tennessee.