The Impact of Busing in Charlotte

In these excerpts from oral history interviews, you’ll hear three speakers with different perspectives on school integration in Charlotte.

Arthur Griffin is an African-American man who attended segregated schools in the 1950s and 1960s. He graduated from Second Ward High School, an African-American high school in Charlotte, North Carolina which closed in 1969. He later became involved in school politics. In this oral history interview, which took place in May 1999, Arthur Griffin discusses desegregation in Charlotte-Mecklenburg Schools.

Latrelle McAllister is an African-American woman who attended West Charlotte High School from 1973 until 1976, during the first years of integration. She speaks about her experiences of both segregated and integrated schools during her interview, and compares and contrasts the two types of schools.

Ned Irons is a white student who attended West Charlotte High School in Charlotte, NC during the late 1990s, many years after the Swann ruling required the school to integrate in the early 1970s, but before busing ended in 2001. West Charlotte is a traditionally African-American school and is one of the oldest schools in the district, so it retains a lot of support from the African-American community in Charlotte. In his interview, which took place his senior year, Ned talks about the experience of attending an integrated school. 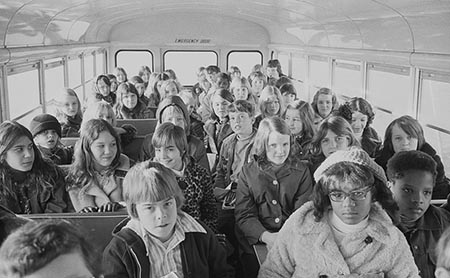 NC public school bus, Charlotte, 1973.
It wasn't until July 1975 that the courts were satisfied that the burden of busing was sufficiently distributed between the races and within the white community.