The nationwide debate over the teaching of evolution in public schools came to North Carolina in the 1920s. The rhetoric began to heat up early in the decade, often pitting religious leaders against educators. William Louis Poteat, president of Wake Forest University, drew the ire of conservative critics both in North Carolina and around the country when he openly accepted the theory of evolution. The University of North Carolina was also a frequent target of evangelical leaders, many of whom criticized the state-supported university for teaching liberal ideas that they believed were out of touch with the beliefs of most North Carolinians.

"One of those books," said Morrison, "teaches that man is descended from a monkey and the other that he is a cousin to the monkey. I don't believe either one of them." After the Governor's review of the texts, the Board of Education removed the books from the state-approved list.

The most contentious debate in North Carolina over evolution began early in the 1925 legislative session when Representative D. Scott Poole, a Democrat from Hoke County, introduced a resolution on the subject. Poole proposed that the House resolve that "it is the sense of the General Assembly of North Carolina that it is injurious to the welfare of the people of the State of North Carolina for any official or teacher in the State, paid wholly or in part by taxation, to teach or permit to be taught, as a fact, either Darwinism or any other evolutionary hypotheses that links man in blood relationship with any lower form of life."

Strident advocates for and against the Poole resolution quickly emerged. In a contentious debate of the House Committee on Education, held on February 10, 1925, J. R. Pentuff, a Baptist minister from Concord, spoke in favor of the resolution, while Harry Woodburn Chase, President of the University of North Carolina, spoke against it. The Education Committee was evenly split on the issue, and had to call on chairman Henry Groves Connor, Jr. to break the tie. Connor voted to return the resolution with an unfavorable report. Supporters were able to send the resolution forward to the full House of Representatives on a minority report, where it was defeated by a vote of 67 to 46.

The debate over teaching evolution in North Carolina was by no means over. Supporters of the Poole resolution continued to speak out against what they saw as anti-Christian teachings in public schools. Many vowed to re-introduce the resolution in the 1927 legislature. The arguments built over the spring and summer of 1925, through frequent editorials and letters to the editor in newspapers and in articles in other publications such as the Biblical Recorder. Evolution received national attention in July 1925 when the case of State v. John Scopes, commonly known as the Scopes "Monkey Trial," was tried in Dayton, Tennessee. At the conclusion of the Scopes trial, some of the leaders of the national anti-evolution movement vowed to devote their energy and resources to North Carolina next. 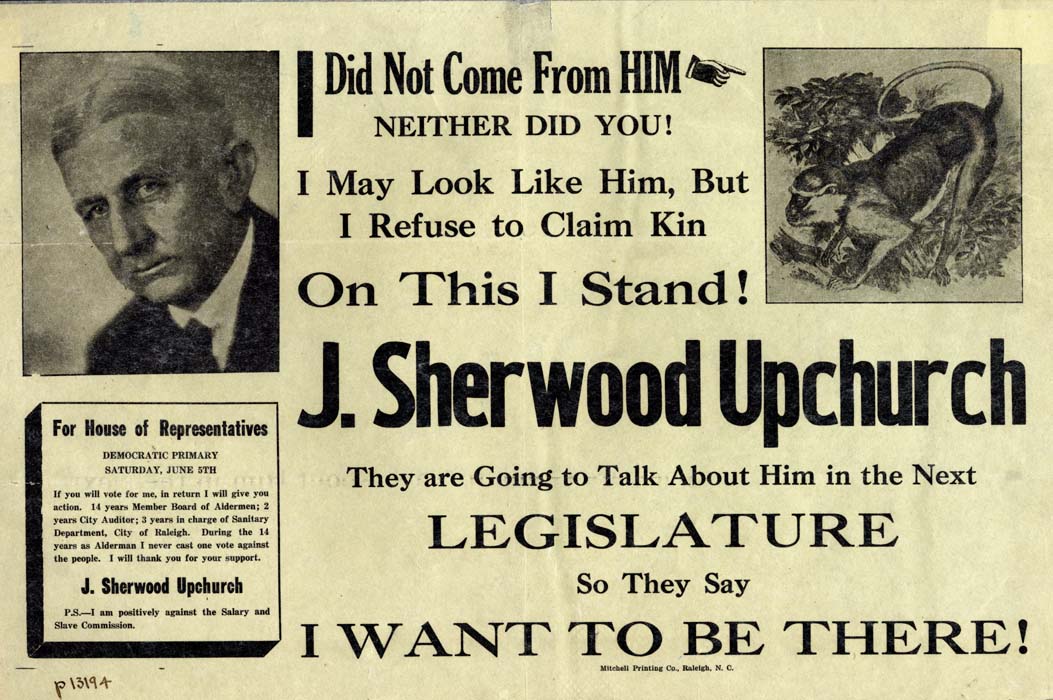 Evolution was a key issue in many of the campaigns for the legislature held in the spring of 1926. J. Sherwood Upchurch, a candidate from Raleigh, featured a picture of monkey on his campaign poster with the slogan "I Did Not Come From Him / Neither Did You!... They are Going to Talk About Him in the Next Legislature... I want to be there!" Results of the elections were mixed, but the victory of many candidates who had run with the promise of keeping the evolution debate out of the legislature suggested that North Carolinians were beginning to tire of the issue.

The anti-evolutionists kept their promise and brought the debate over teaching evolution to the 1927 legislature. The North Carolina Bible League, a statewide organization committed to keeping evolution out of the schools, prepared a bill that was introduced by Poole. Unlike the earlier resolution, this one was more specific in what it prohibited and stipulated a punishment for those who taught evolution. The bill was referred to the Committee on Education where it was again the subject of heated debate, and again returned with an unfavorable report, though this time by a larger margin, with the final vote 25-11 against. Sensing that the mood in the legislature was unlikely to change, the bill's supporters decided against sending it forward on a minority report.

The day after the House Committee on Education sent the 1927 Poole bill back with an unfavorable report, the News & Observer published an editorial that probably reflected the views of many North Carolinians who may not have agreed wholeheartedly with the theory of evolution, but who were uncomfortable with having their reservations written into law: "Religion in North Carolina needs no legislative prop. It is the mud-sill foundation upon which this Commonwealth rests. The General Assembly has important tasks to perform about which it is commissioned to act without undertaking to pass upon questions which are not within its sphere."

Willard B. Gatewood, Jr., who has written extensively about the anti-evolution movement in North Carolina in the 1920s, has argued, along similar lines, that the failure of North Carolinians to adopt a bill restricting the teaching of evolution in schools had more to do with the methods used by the bill's supporters than with the core beliefs of the people in the state. Gatewood writes,

The majority of North Carolinians during the 1920's undoubtedly subscribed to a fundamentalist theology in which there was no place for a belief in evolution. Yet, these same North Carolinians refused to heed the advice of those who prescribed an antievolution law as a remedy for "modern infidelity." The explanation lay in part in the fact that most North Carolinians were passive fundamentalists... Their fundamentalism was far more flexible and spacious than that of the militant minority. The failure of the antievolutionists in North Carolina resulted not so much from public hostility to their beliefs as from aversion to their tactics. The shrillness of their clamor and their inclination to tamper with such principles as religious liberty and the separation of church and state seemed more dangerous than the infidelity which they claimed to be battling. (North Carolina Historical Review 42 no. 3, p. 290.)

The complete website from UNC Libraries' North Carolina Collection, The Evolution Controversy in North Carolina in the 1920s, presents students, teachers, and researchers with an opportunity to view selected primary sources that document the progression of the anti-evolution campaign in North Carolina. These materials also include published opinions from prominent North Carolinians on both sides of the debate, giving modern readers an opportunity to consider these questions anew, to wade through the evidence and arguments for themselves, and to better understand an issue that captivated people throughout the state in the 1920s, and which continues to resonate today.

From The Evolution Controversy in North Carolina in the 1920s. 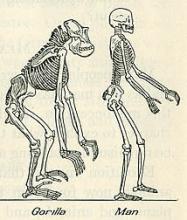 Textbooks teaching that humans and apes had a common ancestor created a political firestorm in the 1920s.