The Cherokees of western North Carolina in the mid-eighteenth century were part of a mighty nation, with a population of 36,000 controlling more than 140,000 square miles across the Southeast. That population was reduced to 7,000 by the 1770s as the native people felt the full impact of European settlers and ceded their lands through a series of treaties. In 1776, at the outset of the American Revolution, the two cultures clashed.

The conflict came one year after the Treaty of Sycamore Shoals whereby much of present-day Kentucky was opened to white settlement. Demands increased for further land cessions. Fighting to protect their society, Cherokee warriors elected to ignore the overwhelming odds against them and made an alliance with the British, trading partners who had promised to protect the native people from encroaching settlements.

By 1770 settlers, mostly European immigrants or first generation colonists, were moving onto lands previously designated by treaty as Indian. The Cherokees in the North Carolina mountains were primarily farmers who raised livestock, hunted for game, and traded with white men for supplies. In May 1776 village councils discussed going to war against the colonists. The younger warriors moved to unite in defense of the Cherokee boundaries. Though aware that the ultimatum would not be met, Cherokees demanded the withdrawal of settlers from the western settlements within twenty days and made plans for an attack.

White traders learned of the plans and gave the settlements enough warning to permit them time to construct rough stockades. The Cherokee strategy was a three-pronged attack aimed at cutting off communication and isolating frontier settlers. By late July Indians had attacked settlements along the North Carolina frontier, killing over thirty inhabitants. Citizens of the backcountry, many residing on lands which by treaty were Cherokee, were alarmed. The new governments in North Carolina, South Carolina, Georgia, and Virginia readied armies to challenge the Cherokees.

Griffith Rutherford, brigadier general of the Salisbury District militia, called for volunteers to take part in North Carolina’s expedition against the Cherokee. The result was the massing of a large military force, one key to the Revolution in the Carolinas. With enlistees reporting from several western counties, Rutherford gathered about 2,500 men and enough supplies for forty days afield. Troops assembled initially at fortified houses across the region, among those Cathey’s Fort in McDowell County and Fort McGaughey in present Rutherford County. From Davidson’s Fort (Old Fort) Rutherford and his men set out on September 1, 1776, heading through Swanannoa Gap toward the Cherokee Middle and Valley Towns. The Indians, having gotten word of the expedition, abandoned many of their settlements, tactically withdrawing from the conflict and sparing extensive loss of life.

Rutherford’s men enslaved a number of Cherokee people and burned whatever was left behind. The strategy was one of complete devastation, a “scorched earth” policy. The objective was to stop a potential British ally from entering the war. With the destruction of Cowee, Rutherford and his corps obliterated the commercial and political center. The effect was to reduce the Middle Towns to ashes and the consequence was death and destruction, with the impact extending to all elements of the society, from the youngest to the oldest.

Rutherford was scheduled to join forces with Colonel Andrew Williamson of the South Carolina militia, in command of about 1,800 men, at the Middle Towns in mid-September. Held up for various reasons, including an ambush intended for the North Carolinians, Williamson and his men caught up to Rutherford at the Hiwassee River on September 26. The two armies divided the following day to begin their return trips through the Cherokee Middle Towns. Over the next several days, the militia of the Carolinas obliterated those Indian settlements. Together the two armies were responsible for destroying thirty-six Cherokee villages, leaving no homes, crops, or livestock. Rutherford concluded his campaign in early October. Forced to survive over the winter on wild game and nuts, the remaining Cherokee, through representatives, signed peace treaties the following year.

From a brochure published by the North Carolina Office of Archives and History. 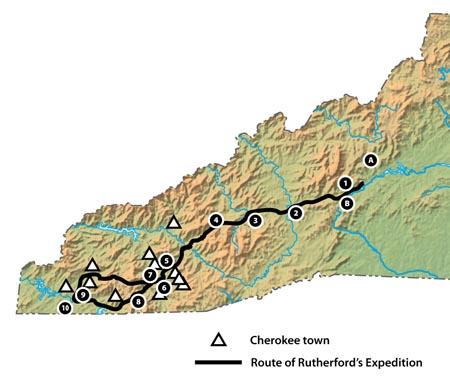 Section of map of Rutherford's expedition, 1776.