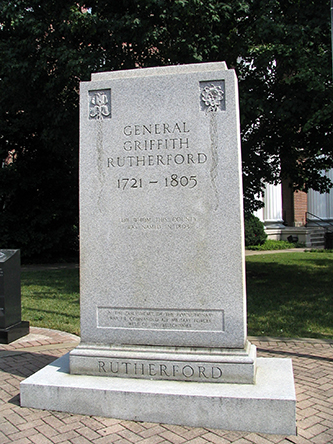 Griffith Rutherford, colonial and Revolutionary official, military officer, and land speculator, was born in Ireland, the son of John and Elizabeth Griffith Rutherford. His grandfather, the Reverend Samuel Rutherford, had been banished from Scotland to Ireland because church officials opposed his liberal Presbyterianism. What little is known about his early life was obtained from his son Henry by Lyman C. Draper. According to family tradition, both parents died at sea in 1721, and the infant Griffith was left with relatives in Pennsylvania. Although his later writings indicate that he was barely literate, Rutherford had a keen mind and very early mastered the craft of surveying. He moved first to Halifax County, N.C., and in the early 1750s settled in Rowan County. In 1754 he claimed a 656-acre tract on Grant Creek in what was known as the Irish Settlement. In the same year he married Elizabeth, the daughter of James Graham, another early landholder in the area.

There is little documentation concerning Rutherford's participation in the French and Indian War; however, he probably served with troops under the command of Colonel Hugh Waddell, as he was listed as a captain in the Rowan militia in 1760. His public life on the northwestern Carolina frontier began with his appointment as deputy to John Frohock, surveyor for Henry E. McCulloh. In 1766 Rutherford, along with Frohock, represented Rowan County in the Assembly, thus commencing a long legislative career that continued for two turbulent decades. He was also a justice of the peace and served as sheriff of Rowan County from 1767 to 1769. Although a member of the "Courthouse Ring," Rutherford was able to survive politically the upheaval associated with the Regulator movement. He did this by promoting some of the Regulator causes in the Assembly, notably advocating the creation of additional western counties. In September 1768 he participated in the council of war held at Hillsborough, which recommended that most of the Regulators be pardoned. Whether by choice or by force, Rutherford was one of the Rowan officials who agreed to return any excessive fees he may have collected as surveyor. His militia company obeyed General Waddell's orders to join the western troops in the expedition against the Regulators in May 1771. When Waddell's forces were met by a large number of Regulators near the Trading Ford on the Yadkin, Rutherford was among those who advised the general to remain encamped and to discontinue his march towards a rendezvous with Governor William Tryon. The following year, 1772, he was commissioned colonel of the Rowan County militia.

Rutherford was not among those leaders who first agitated for rebellion against Britain. The argument had been advanced that perhaps he was distrustful of the eastern Whig leadership of the movement. But by the fall of 1775, the Third Provincial Congress had appointed him to the Safety Committee of the Salisbury District and colonel of minutemen for Rowan County. Soon he was called upon to lead his men into South Carolina to aid in crushing the Scovillite Tories in the "Snow Campaign" of December 1775.

In February 1776 Rutherford led his Rowan troops east to Cross Creek in an effort to thwart Loyalist activities in the Upper Cape Fear region. Although he arrived too late to take part in the Battle of Moore's Creek Bridge, his military efforts did not go unnoticed and unrewarded. When he attended the Fourth Provincial Congress in April, he was named brigadier general of militia for the Salisbury District, an area that included the entire western frontier of the province.

Even as this appointment was being made, unrest was rampant on the western frontier as the Cherokee, bound by treaty to the British, grew wary of increased encroachments by settlers into tribal lands. By mid-July the new brigadier was gathering his forces on the headwaters of the Catawba for an invasion of the Cherokee country. The Council of Safety attempted to coordinate North Carolina's military action with similar efforts by Virginia and South Carolina. However, Rutherford, ever suspicious of the eastern-dominated council, chafed for action. On 1 September he led his force of approximately 1,700 officers and men into the Cherokee lands, falling first on the middle settlements and then on the valley towns, where he joined forces with South Carolinians led by Colonel Andrew Williamson. By late September the two armies made their way home after destroying thirty-six towns and laying waste to crops and storehouses, thus reducing the Indians to a state of near starvation as winter approached. Although the Cherokee threat was effectively neutralized by this campaign, Rutherford was ordered by the legislature to raise independent companies to range and to construct forts along the frontier. He also turned his attention to the growing menace of roving Loyalist bands in his western district.

Late in 1778 Governor Richard Caswell ordered Rutherford's troops southwards to help defend South Carolina and Georgia from the British invasion. By early January 1779 his troops were encamped near the Savannah River. The militia troops were dispirited and ill-equipped. After the defeat at Briar Creek of a North Carolina force commanded by General John Ashe, Rutherford participated in the court of inquiry against Ashe. As the period of enlistment for his men was nearing an end, Rutherford returned home by mid-April. The next year he was again ordered south, this time to aid in lifting the siege of Charleston, but the city fell before the backcountry militia arrived. The brigadier realized that a British invasion of the Salisbury District was almost a certainty, and that the invading army would in a large degree be dependent on local Loyalist support. Therefore, he set about systematically to destroy Loyalist resistance in the area. This began with the defeat of Tory partisans at the Battle of Ramsour's Mill on 20 June 1780. By mid-July he was raising forces to assist General Horatio Gates in his attempt to stop Lord Charles Cornwallis. This ended in disaster at Camden on 16 Aug. 1780. Rutherford, shot through the leg and with a saber wound to the head, was captured by the British.

After being detained at Camden he was first transported to Charleston and later taken by prison ship to St. Augustine. His exchange was arranged in June 1781. Released in Philadelphia, he reached Rowan County in August only to find that British forces had "stripped" his plantation. Immediately he resumed command of his brigade and by early October marched his troops eastwards, where on 15 October he attacked and defeated a Loyalist band at the Battle of Raft Swamp. By the end of the month he had reached Wilmington, the last major British outpost in the state. Before the battle could be joined, word arrived of the surrender at Yorktown and the city was evacuated. Upon returning to western North Carolina, Rutherford continued to harry Tory enclaves. During the fall of 1782 he assisted General Charles McDowell in his expedition against a renewed Cherokee threat. This campaign effectively ended Rutherford's military career.

Rutherford's successful military exploits enhanced his political clout. Within a month after his return from the Cherokee campaign of 1776, he attended the Fifth Provincial Congress, in November, where he served on the committee to draw up a "Bill of Rights and Form of a Constitution" for the new state. Although his role in this endeavor cannot be determined, certainly he favored the dominance of the legislative branch and other radical provisions of the constitution. Subsequently, he represented Rowan County in the state senate for the next decade.

His attempt to pass a radical confiscation act failed in 1777, but many of his demands were included in the revised act of 1779. In politics, just as on the battlefield, Rutherford was ruthless in his determination to destroy those who did not ardently embrace the Revolutionary cause. During the 1782 session he was elected to the Council of State and was appointed commissioner of confiscated property for the Salisbury District. Within a few months he had identified eighty-two parcels for confiscation. Rutherford continued to advocate more stringent laws against Loyalists as well as a twofold tax on Quakers and Moravians. This last action prompted one leading conservative to refer to him as a "blood thirsty old scoundrel." No doubt his radicalism was a primary factor in the defeat of his nomination as governor in 1783. When the Treaty of Paris was placed before the state senate in 1784, Rutherford successfully led the opposition to Article 5, which concerned the restoration of confiscated Loyalist property. The article was defeated.

When the convention was called to meet at Hillsborough in 1788 to consider the adoption of the federal Constitution, Rutherford was in attendance. Although he favored an open discussion of the document, he was unmoved by Federalist arguments and voted with the majority not to ratify. He was unsuccessful in his attempt to rally support at the convention for the selection of Fayetteville as the location of the state capital. In 1789 Rowan County did not return him as a delegate to the Fayetteville convention, which ratified the new Constitution. However, the legislature continued to elect him to the Council of State.

By the end of the war Rutherford held in excess of 2,000 acres, mostly in Rowan, with lesser tracts in Lincoln and Burke counties. He soon became caught up in speculative western land ventures. In 1783 he joined with William Blount, Richard Caswell, Joseph Martin, John Donelson, and John Sevier in a scheme to settle the area known as the "Bent of the Tennessee" or Muscle Shoals. This effort failed. Also in 1783 Rutherford was appointed by Governor Alexander Martin to survey the western lands set aside by the General Assembly to satisfy the claims of those who had served in the North Carolina Continental Line. For the performance of this duty, he received 3,000 acres of Tennessee land. It is estimated that by 1790 Rutherford owned between 12,000 and 20,000 acres west of the mountains. In 1792 he sold his home plantation on Grant Creek and at age seventy-one moved to Sumner County in the Tennessee country. It was a new frontier and Rutherford found it necessary to build a stockade around his new home to protect against Indian attacks.

William Blount prevailed upon the first session of the territorial legislature to nominate Rutherford to the legislative Council. He was duly appointed by President George Washington on 13 June 1794 and was subsequently elected president of the Council. In 1803 the state of Tennessee created Rutherford County. Earlier, in 1777, the North Carolina legislature had honored the backwoods brigadier in naming a county for him in that state.

In his eighty-fourth year the old soldier died peacefully in his sleep. According to family tradition, he was buried in a cemetery near Lagardo, Tenn. When in his prime he was described as being 5'8" in height, weighing approximately 180 pounds, and having red hair. There is no known portrait of him.

Thomas P. Abernethy, From Frontier to Plantation in Tennessee: A Study in Frontier Democracy (1932).