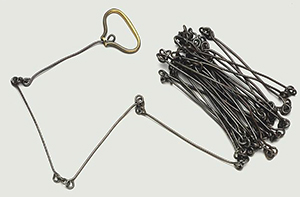 From colonial times through the twentieth century, land surveying in North Carolina was an imperfect art at best, using old measurements such as furlongs, chains, and rods (or perches or poles) and imprecise boundaries such as trees or gulleys to map out often vague property lines. In the first half of the eighteenth century, the colony was blessed with the services of two first-class geographers, the surveyors-general John Lawson and Edward Moseley. Lawson made a reconnaissance deep into the Carolinas and in 1709 published A New Voyage to Carolina, his account of that journey, with an excellent map and drawings of the fauna. Some 20 years later, Moseley produced his well-known 1733 map of the colony. He also had the distinction of participating in three of the four major surveys of that day, which permanently shaped North Carolina's geography and influenced its ethnic distribution. These included the running of the line dividing Virginia and North Carolina (made famous by the narrative written by Virginian William Byrd), the line dividing North Carolina and South Carolina, the southern parallel of the Granville District, and the tracts of the 1.2 million acres granted to Henry McCulloh.

In the revolutionary era and the early years of statehood, North Carolina was served by a new generation of surveyors such as John Daniel, one of the original donors of land to the new state university. He worked mainly in the New Hope Creek watershed of Orange and Chatham Counties, and many of his original plats are in the envelopes of the state land grants. His map of the prominence between Morgan and Bolin Creeks is the earliest of what is now Chapel Hill. 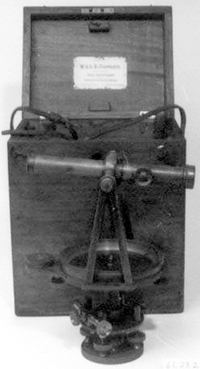 A century later, in the days of Reconstruction and the new state constitution, the management of local taxes was taken from the courts and given to county commissioners, resulting in an immediate need for new and accurate county maps. Between the late 1870s and the mid-1890s many counties ordered maps from surveyor-engineer-cartographers such as Fendol Bevers (Wake), Will Spoon (Alamance), George Tate (Orange), and Lemuel Johnson, a mathematician at Trinity College (Davidson, Randolph, and Durham).

Not until the twentieth century and the advent of aerial surveys did county maps achieve a reliable accuracy. In the years just before World War I, the U.S. Department of Agriculture released an excellent series of soil maps, and the first of the U.S. Geological Survey maps appeared. By the twenty-first century, surveying had been enhanced by remarkable developments in field equipment-utilizing radio beams, lasers, and even global positioning via satellites-that rendered a previously unimagined accuracy.

My dad was a registered land

My dad was a registered land surveyor in the 1940s, 50s & 60s (he died in Oct 1960 but worked up to the last day that he died literally with his boots on. Just was wondering if there’s a log or registry of surveyors from those times.

Session laws of 1921 required surveyors to be licensed by the State. The license and examination is done by the State Board of Examiners for Engineers and Surveyors. That boards website is at https://www.ncbels.org/ and you could try contacting them to see if they have the information you are looking for.

Hello, i have some surveyor

Hello, i have some surveyor equipment from the 1920’s that I would like to loan to the museum. Please call me at your earliest convenience. 919-441-2774

You can contact the NC Museum of History at this number:

This is an interesting

This is an interesting article showing the growth in land surveying. It sure has come a long way in recent years with the new technology we have! Aerial surveys must have made surveying so much more accurate and plausible.