Henry Mcculloh, London merchant, land speculator in North Carolina, colonial official, and author of a stamp tax scheme for the American colonies, was the son of James Mcculloh (or Mcculloch) of Grogan, Scotland. Frequently he has been confused with Henry Mcculloch, who was secretary of North Carolina, and may have been his cousin. 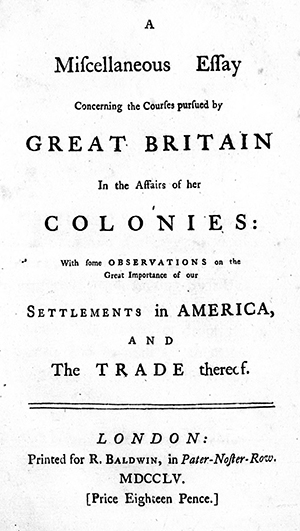 Although Mcculloh spent only about seven years in North Carolina, he was the largest landholder, after Lord Granville, in the history of the colony or the state. He was a prosperous merchant in London and had already acquired his vast landholdings in North Carolina when, in 1739, he was appointed "commissioner for supervising, inspecting, and comptrolling our revenues and grants of land in South and North Carolina." In his efforts to receive the appointment, he had sent a memorial to the privy council about the defective land and quitrent system in the Carolinas and how it could be remedied. It has been said that after he went to America late in 1740, he had little success in South Carolina and in North Carolina used his position to wage an unsuccessful vendetta against governor Gabriel Johnston, a former protégé, and his chief American competitors. These competitors were a group of speculators in the Cape Fear region who had become the dominant political force in the colony.

As a former benefactor of Governor Johnston, Mcculloh had profited handsomely. He received two grants of 60,000 and 72,000 acres, while a third grant of 1.2 million acres to James Huey, Murray Crymble, and their associates actually went to mcculloh since Huey and Crymble were acting as his trustees. The latter grant was awarded on the condition that six thousand protestants be settled on the land and quitrents be paid, but the contract did not have to be complied with for ten years. Mcculloh's two earlier grants had also been conditioned on his paying quitrents and installing protestant settlers on the land to produce raw materials needed in England. He fell far short of meeting both of these obligations and was charged not only with failing to pay the rents but also with conniving with purchasers of his lands to do likewise. It is little wonder that he did not collect sufficient rents to cover his salary, which he was also committed to do.

In fact, by the time the patents for the 1.2 million acres were issued in 1746, Mcculloh received only about two-thirds of the grant. His failure to live up to his contract led to his losing that holding in 1765. At its greatest extent, his land lay along the Cape Fear, Deep, Uwharrie, Tar, Flat, Eno, Yadkin, and Catawba rivers. He became involved in numerous disputes and lawsuits over land matters, and he seems to have spent most of his time in America looking after his own interests.

Mcculloh's involvement in provincial politics led to his taking sides with the Albemarle counties against Governor Johnston and the counties of the Cape Fear region during the great schism that developed in 1746 over representation in the North Carolina general assembly. Even after he returned to England in 1747, he continued to fish in these troubled waters. He still had important connections within the home government, and when Johnston died in 1752, he was succeeded as governor by Mcculloh's fellow speculator, Arthur Dobbs. Dobbs's successor, William Tryon, was also friendly to the interests of Mcculloh.

Mcculloh agreed to surrender extensive acreage within the tract established as the Granville district to satisfy Lord Granville's claim. By the time his son, Henry Eustace Mcculloh, arrived in 1761 as his agent, the elder Mcculloh had disposed of a large percentage of his land other than the tract he was to lose in 1765. The land he retained devolved to Henry Eustace, and all of it was confiscated during the American revolution despite the efforts of his great-nephew, James Iredell, to save it. Although it is not known whether Mcculloh realized much money from his speculative ventures, it has been assumed that they were quite valuable.

After Mcculloh returned to England, he wrote pamphlets and memorials about the American colonies in an attempt to receive another appointment. Two of them, each containing just over 130 pages, were published in 1755. One was entitled  A miscellaneous essay concerning the courses pursued by Great Britain in the affairs of her colonies: with some observations on the great importance of our settlements in America, and the trade thereof. another was The wisdom and policy of the French in the construction of their great offices so as best to answer the purposes of extending their trade and commerce and enlarging their foreign settlements: with some observations in relation to the disputes now subsisting between the English and French colonies in America.

From his pen in 1757 came a report raising the idea of a stamp tax. This was not original with him but he developed it into a plan that he presented to the Earl of Halifax. In 1761 he prepared still another version that remained in manuscript form until about 1905, when it was printed for the first time; it was entitled "Miscellaneous representations relative to our concerns in America, submitted to the Earl of Bute." Soon the idea was adopted by the government of Lord Granville, and Mcculloh was employed to draft a stamp tax bill. His draft, however, was rejected for a more moderate version that became the stamp act of 1765.

At the time of his death Mcculloh was residing in Chiswick, Middlesex County, near London, to which he had moved from nearby Turnham. He was buried at St. Nicholas church, Chiswick.

McCulloh, Henry. "General thoughts on the construction, use and abuse of the great offices [microform] : with a view to some further discourses on the same subject." London: Printed for R. Baldwin. 1754. https://archive.org/details/cihm_20162 (accessed July 19, 2013).

McCulloh, Henry, d. 1778. "Proposals for uniting the English colonies on the continent of America [microform] : so as to enable them to act with force and vigour against their enemies." London: Printed for J. Wilkie. 1757. https://archive.org/details/cihm_20236 (accessed July 19, 2013).

[Title page]. McCulloh, Henry. A miscellaneous essay concerning the courses pursued by Great Britain in the affairs of her colonies: with some observations on the great importance of our settlements in America and the trade thereof. London : Printed for R. Baldwin. 1755. https://archive.org/details/cihm_20166 (accessed July 19, 2013).

Just an FYI - this page is

Just an FYI - this page is entirely in lowercase. Thought you might want to know!

Thank you for catching this and letting us know!  We will be updating it shortly.