Part 1: Introduction
Part 2: First North Carolina Conflicts and the Establishment of a Provincial Government
Part 3: North Carolina's Role in the Continental Congresses
Part 4: Conflict with the Cherokees and British Invasion of the South
Part 5: Gen. Nathanael Greene and the Battle of Guilford Courthouse
Part 6: A Troubled Aftermath
Part 7: References 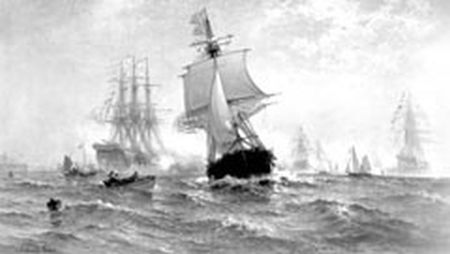 The American Revolution was fought on several critical battlefronts across North Carolina and near its borders, altering the lives of all North Carolinians and creating social and political upheaval within practically every community. The progression to full-scale war in North Carolina, as in other American colonies, was a slow process marked by years of emerging unrest among its citizens. Crises such as the violent resistance to the 1765 Stamp Act-as well as the adoption of anti-British documents, or "resolves," by some local political leaders who believed England's economic policies toward the colonies to be unfair and overly punitive-created a spirit of revolution well before any significant battles took place within the province. By the time war erupted after the bloodshed in Lexington and Concord, Mass., on 19 Apr. 1775, which left the British with 273 dead, wounded, or missing compared to 100 American casualties, many North Carolinians had already been anticipating the fight to gain their independence.

I have read several of your

I have read several of your articles and these articles have been very helpful in my research.
I am writing a book about enslaved ancestors' contribution to the Nation's early economy from North Carolina. Mostly researching occupation the elder kinsmen say they worked in.
V. Lyons

this isn't at all what need

this isn't at all what need

Please let us know what specific kind of information you're looking for and we will try to help you locate helpful information. Feel free to post back here in NCpedia.

I need some information on

this isn't at all what i

this isn't at all what i needed

Bery useful site. Got many

Bery useful site. Got many information from it for my probect. Happy happy joy joy.
-Mr.Patel