Part 5: Gen. Nathanael Greene and the Battle of Guilford Courthouse 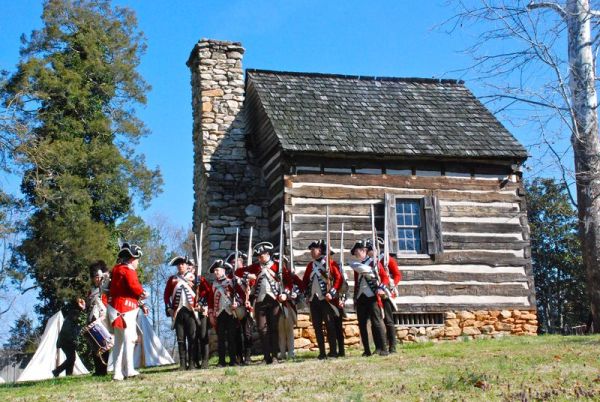 The Patriots got another boost on 3 Dec. 1780, when Gen. Nathanael Greene replaced Horatio Gates as commander of the Southern Department of the Continental Army. Greene arrived in Charlotte and quickly went to work rebuilding the army that Gates had lost at Camden, S.C. Greene, who would prove to be one of the most skillful American generals in the Revolutionary War, was aided by outstanding subordinates such as Daniel Morgan, William Washington, William R. Davie, and Henry "Light Horse Harry" Lee.

Cornwallis sent Lt. Col. Banastre Tarleton and his British Legion in pursuit of one of Greene's smaller units under Morgan. The overconfident Tarleton, who had a reputation for brutality first earned at the Battle of the Waxhaws in South Carolina in May 1780, was soundly defeated by Morgan at the Battle of Cowpens in South Carolina on 17 Jan. 1781. Tarleton's rout forced Cornwallis and his 3,000-man army to pursue Morgan into North Carolina. General Greene saw this as an opportunity to destroy Cornwallis and ordered his scattered units to rejoin him. Rather than taking on the British commander at this point, however, Greene conducted a brilliant strategic retreat, marching as far north as Virginia, which worked to wear down Cornwallis and elongate his supply lines. A weary and frustrated Cornwallis at last gave up chasing Greene and marched into Hillsborough, where he again proclaimed the restoration of royal rule. Hillsborough residents were no more receptive to this decree than the citizens of Charlotte had been, and Patriot forces began attacking isolated British troops.

The situation was no better for North Carolina's Tories in the region. On 25 Feb. 1781 about 90 Tory militiamen, led by Col. John Pyle, were killed in an ambush by Light Horse Harry Lee and his American Legion while on their way to join Cornwallis in Hillsborough. Lee's men were dressed in short green jackets similar to those worn by Tarleton's British Legion. Lee permitted the unsuspecting Pyle to approach, thinking Lee was Tarleton before springing the trap in what became known as "Pyle's Massacre."

Greene at last felt ready to face Cornwallis directly and moved his army to Guilford Courthouse on 15 Mar. 1781. Greene's optimism was well founded. While his army had grown to 4,400 men, of whom 2,200 were battle-hardened Continentals, Cornwallis's weary force had been reduced from 3,000 to 2,252 troops.

The contest was fierce; at one point a desperate Cornwallis knowingly ordered cannons to be fired too close to his own lines, killing some of his men in order to prevent defeat. By the battle's end, American casualties were heavy. Because Greene retreated, leaving the enemy in possession of the field, Cornwallis won the tactical contest. In fact, however, the Battle of Guilford Courthouse proved to be a Pyrrhic victory for the British, who lost 93 soldiers killed, 439 wounded, and 26 missing. When word of the battle reached England, Charles James Fox declared in Parliament that "another such victory would destroy the British Army."

A tired and battered Cornwallis now retreated to Wilmington to be resupplied, but the Americans were determined not to let him travel there in peace and harassed him at numerous points. Light Horse Harry Lee skirmished with the British at Ramsour's Mill, and Col. Alexander Lillington and the Bladen County militia were responsible for about 35 British casualties between Cross Creek and Wilmington. Once in Wilmington, Cornwallis again announced the restoration of British rule and the reappointment of Martin as royal governor, although Martin soon gave up and sailed for England, claiming sickness.

Cornwallis determined that the best way to secure North Carolina was to invade Virginia. He and his Tory allies made a strong march north through eastern North Carolina, fighting various skirmishes and destroying Patriot property along the way. In May 1781 Cornwallis and his army left North Carolina and headed for Yorktown, Va., where he was finally defeated by Gen. George Washington and the French at the climactic Battle of Yorktown on 19 Oct. 1781. When the news reached North Carolina, the British began withdrawing, with the last royal troops departing from Wilmington on 18 Nov. 1781. The last North Carolina soldier was released from duty in April 1783.

At the close of the war, the British held as prisoners a number of North Carolina soldiers who had been captured at Charles Towne. These men suffered untold privations aboard sweltering British prison ships moored near the city or in the British West Indies. To escape the inhumane conditions, many of these North Carolinians enlisted on the side of the British in its ongoing war with Spain.

In response to concerns voiced by friends and families of the prisoners, the General Assembly passed a resolution in 1782 authorizing Governor Alexander Martin to negotiate the release of the captive North Carolinians with Gen. Alexander Leslie, the British commander at Charles Towne. By the time the legislature met in 1783, Martin was able to report that his negotiations were successful in securing the release of North Carolina Patriots in exchange for certain North Carolinians who had remained loyal to the Crown during the war. The governor described such Loyalists as "disaffected inhabitants guilty of Military offenses only."

Reenactment of the Battle of Guilford Court House, March 15, 1781.  Photo courtesy of the Greensboro Daily Photo. Available from http://www.greensborodailyphoto.com/2010/03/reenactment-of-the-battle-of-guilford-court-house.html (accessed May 10, 2012).