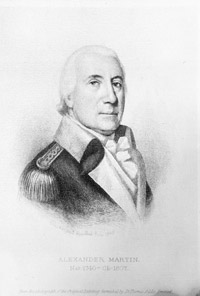 Alexander Martin (ca. 1739-1807) served nonconsecutive terms as governor in the late eighteenth century. He was born in Hunterdon County, New Jersey, the eldest son of Hugh Martin and the former Jane Hunter. Following a preparatory education in Connecticut, he attended the College of New Jersey (now Princeton University), where he received A.B. and A.M. degrees in 1756 and 1759 respectively. Although he never married, he left a son, Alexander Strong Martin, whom he had publicly acknowledged.

About 1760 Martin moved to North Carolina and established himself as a merchant and lawyer in Salisbury. By 1766 he has become a justice of the peace and county attorney. In 1770 he was one of several county officials attacked by Regulators at Hillsborough, and during the next year he was reproved by Governor Josiah Martin for unauthorized negotiations with Regulators near Salisbury. In 1773 Martin relocated to a tract of land along the Dan River in present-day Rockingham (then Guilford) County. Rising quickly to local prominence, he represented Guilford County in the colonial assembly in 1773-1774 and in the second and third provincial congresses in 1775. He later served in the state Senate from 1778 to 1782. He was chairman of the Board of War in 1780, and speaker of the Senate from 1780 to 1782. Following the Revolution, Martin returned to the state Senate in 1785, 1787, and 1788, again serving as speaker.

Martin’s brief military career during the Revolution was marred by controversy. Named to succeed Robert Howe as commander of the Second Regiment of the North Carolina Continental Line, he was later court-martialed for cowardice following the Battle of Germantown. Though acquitted, he resigned his commission and returned to North Carolina. In 1787 Martin was one of five delegates from North Carolina to the Constitutional Convention in Philadelphia. He took little part in the deliberations and returned home well before the Constitution was adopted. Moreover, he was the only member of the North Carolina delegation not strongly committed to the Federalist position.

As speaker of the Senate, Martin in 1781 assumed the office of governor during Thomas Burke’s period of captivity, and on April 22, 1782, he was elected over Samuel Johnston to the first of three consecutive terms in his own right. Seven years later, on December 5, 1789, he was again elected to the first of three consecutive terms. As chief executive, Martin steered a moderate course between Federalist and Anti-Federalist extremes, seeking consensus on major issues while defending the interests of western residents. His repeated election to the governorship bears ample testimony to his practicality, political skills, and personal popularity. Major accomplishments during his two administrations included the close of the Revolution, collapse of the breakaway “State of Franklin,” chartering of the University of North Carolina, and establishment of Raleigh as the permanent state capital.

At the end of his last term, Martin was elected to the United States Senate where he served for the next six years. While there he advocated open sessions, limited government, and economic restraint. Defeated for reelection in 1798, he returned to North Carolina and to his Rockingham County home, “Danbury.” In 1804 and 1805 he again returned to the state Senate, serving during the latter year as speaker. Martin died at his home on November 2, 1807, and was interred on the grounds.