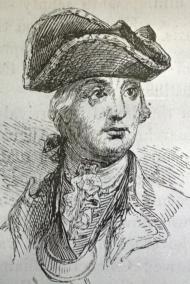 Robert Howe, planter, soldier, and politician, was born in New Hanover (later Brunswick) County, the son of Job Howe (Howes), who moved to North Carolina from Charleston, S.C., and settled on the Cape Fear River where he prospered as a planter. Sarah, Job's wife, was a descendant of Sir John Yeamans; Job's mother, Mary Moore, was the daughter of South Carolina governor James Moore.

Young Howe, according to tradition, was educated in England. In 1754 he married Sarah Grange, daughter of Thomas Grange, but they separated in 1772. The number of both his legitimate and illegitimate children is open to debate. In her will Sarah Howe mentioned a son, Robert, and daughters Mrs. Ann Goodet Daniel and Mary Moore; another source adds a second daughter, and still another includes Robert and six daughters. Howe's reputation as a womanizer was widely commented upon.

Howe received a considerable fortune from his grandmother and from his rice plantation on Middle Sound opposite Barren Inlet. He also owned a plantation in Bladen County where he became captain of a militia about 1755. He was appointed a justice of the peace for Bladen County in 1756, and received a similar appointment in 1764 when Brunswick County was created. From 1760 to 1762 Howe represented Bladen in the Assembly. In 1764 he was elected a member from Brunswick and thereafter was reelected six times. As a captain of militia in 1766–67, he was in command of Fort Johnston, a post he also held from 1769 to 1773. He served with Virginia troops in the French and Indian War, and in Governor William Tryon's expedition against the Regulators he was a colonel of artillery.

With the onset of the revolutionary crisis, Howe became a member of the Committee of Safety for Wilmington and Brunswick County. He also served on the committee that supervised the collection of corn, flour, and pork in August 1774, intended as a gesture of support for Boston. After the news of Lexington and Concord reached North Carolina in May 1775, he assumed command of the drilling of the militia. On 15 July, Howe's command of nearly five hundred militia marched out of Brunswick against Fort Johnston. Early in the morning of 19 July, after Governor Martin had fled, the militia set fire to the fort and the surrounding buildings.

When North Carolina created two regiments for the newly authorized Continental Line, Howe was appointed colonel of the Second North Carolina Regiment on 1 Sept. 1775. Late in the year he marched into Virginia and, although too late to participate in the Battle of Great Bridge, assumed command of the North Carolina and Virginia troops that captured Norfolk. He had been given the post because of his seniority over Colonel William Woodford, of Virginia, who praised Howe as a "brave, prudent & spirited commander." For his services he received the thanks of the Virginia Convention on 22 Dec. 1775 and of the Provincial Congress of North Carolina on 27 Apr. 1776.

In March 1776, along with James Moore, Howe was promoted to brigadier general by the Continental Congress and ordered to South Carolina. While he was away his plantation was destroyed by the British. When Henry Clinton was in the Cape Fear area, he issued a proclamation offering pardon to all those who would take an oath of allegiance with the exception of Cornelius Harnett and Robert Howe. In Charleston, Howe acted as something of a super-adjutant to Major General Charles Lee, and was put in command of the South Carolina militia at the first siege of Charleston in June 1776. Although an expedition against St. Augustine was contrary to Howe's better judgment, he marched from Charleston on 8 Aug. 1778 with the regulars. When Lee was recalled to the northward, Howe was left in command of the troops in Georgia. But the effort to capture St. Augustine ended in failure as a result of British reinforcements, transportation breakdowns, an outbreak of malaria, and lack of cooperation by Governor John Houstoun of Georgia.

After the death of Brigadier General James Moore on 15 Apr. 1777, Howe was appointed to succeed him as commanding general of the Southern Department. He was promoted to major general on 20 October. When Savannah was threatened by British forces under Lieutenant Colonel Archibald Campbell, Howe assumed the defense of that town. Because of the lack of cooperation by Governor John Houstoun, Howe was outflanked and defeated by Campbell on 29 Dec. 1778. Already in disfavor with South Carolina and Georgia politicians, Howe was forced to bear the greater part of the blame for the loss of Savannah, although he was subsequently acquitted by a court martial "with the Highest Honor."

Notwithstanding the loss of Savannah, his recall as commanding general of the Southern Department was more political than usually suspected. As early as 20 Aug. 1777, the South Carolina Assembly had passed a resolution questioning Howe's right to command in that state. An acrimonious dispute with Christopher Gadsden eventually led to a duel on 30 Aug. 1778, with Howe and Gadsden each missing at a distance of eight paces. However, Joseph Hewes attributed Howe's recall to a "little ridiculous matter he has been concerned with in South Carolina, with regard to a female."

The Continental Congress removed Howe as commander of the Southern Department on 25 Sept. 1778. Ordered to the north, he rejoined George Washington's army on 19 May 1779 but was incapacitated for over a month by injuries resulting from a fall. On 18 June, he was sent across the Hudson River to cooperate with General Israel Putnam in the attempt to take Fort Lafayette on Verplanck's Point. Howe could not carry out his orders to concentrate artillery fire on the fort, as there were few field pieces along and, for some reason, those that were there lacked ammunition. Moreover, had these articles been available, there were no entrenching tools, no provisions, and no wagons to transport them. After an engineer had examined the fort and declared that an attempt to take the place by storm would be "ineligible," Howe advised Washington to call off the siege, which was done.

Howe was relatively uninvolved in later military plans, although he was commandant of Fort West Point prior to the Arnold conspiracy and was active in the upper Hudson for the rest of the war. He served as a member of the court martial board that convicted Major John André of spying. And in 1781, when the malignancy of mutiny spread from the Pennsylvania Line to the New Jersey Line, Washington sent Howe with five hundred men to quell the rebellion of the latter group. Marching swiftly through a two-foot snow in the early morning chill of 27 January, Howe surrounded the mutineers' camp with men and artillery. Two of the three leaders convicted by a speedy court martial were executed and the mutiny collapsed.

In 1783 Howe was again in charge of the troops that dispersed the discontented soldiers who had driven the Continental Congress from Philadelphia. In the same year he returned to his North Carolina plantation, Kendall (above Orton), to resume his career as a planter, yet he was in Philadelphia frequently between 1784 and 1785. In 1786 he was elected a delegate to the North Carolina House of Commons. On his way to a meeting of the house, he became ill and died in Bladen County.

As North Carolina's only major general, Howe spent too much time in Continental service to have made significant contributions to the state units. Judging by his performance at the Continental level, one is led to suspect that he leaned too heavily towards the spectacular. Yet, Howe might have been one of the better known general officers of the American Revolution had his timing been better; his opportunities came at times when he did not have the proper field strength to gain favorable recognition.