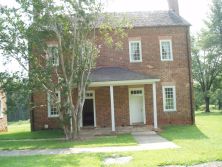 Charles McDowell, Revolutionary War officer, was born in Winchester, Va., the son of Joseph McDowell, who settled at Quaker Meadows, west of present-day Morganton in Burke County, N.C., and his wife Margaret O'Neil McDowell. He was a brother of Joseph McDowell. At the beginning of the American Revolution Charles McDowell became a captain of militia (in what was then Rowan County), but in April 1776 he was promoted to lieutenant colonel. He was occupied in quieting Indian raids and in preventing the activity of scattered Loyalists in the backcountry. He also participated in the expedition of 1776 led by Brigadier General Griffith Rutherford against the Cherokee Indians.

When Loyalists led by British Major Patrick Ferguson invaded the Carolinas in 1780, McDowell called for assistance from the "Overmountain Men" in the counties that had been created by North Carolina west of the mountains (in what is now Tennessee). Together they engaged in guerrilla warfare, harassing the enemy on every occasion and preventing other Loyalists from joining Ferguson. As the summer advanced the British and Loyalists became a more serious threat, and McDowell called for reinforcements from across the mountains. Although McDowell was not actually present, it was the Overmountain Men who won the important Battle of Kings Mountain (7 Oct. 1780) that started the enemy on the road to surrender at Yorktown a year later. The North Carolina General Assembly commissioned McDowell brigadier general, and he was placed in command of troops once more sent against the Cherokee Indians.

McDowell served in the state senate in 1777 and 1778 and for nine additional consecutive terms between 1782 and 1789. In 1784 he was one of three commissioners named to lay off the county seat town of Morganton in Burke County. At various times he also served as a county justice of the peace, sponsored a school, and was county entry taker. He served in the Hillsborough and Fayetteville conventions (1788 and 1789), where he favored ratification of the federal constitution.

Near the end of the Revolution McDowell married Grace Greenlee Bowman, the widow of Captain John Bowman. They had several children, including Charles and Sarah Grace.