Enslavers in the colonies were panicked by Lord Dunmore's (the royal governor of Virginia) proclamation. With the British government offering freedom in exchange for military service, enslaving colonists feared a revolt from enslaved people as well as a mass exodus of enslaved labor. This rebuttal, sampled from the Virginia Gazette in 1775, illustrates enslavers opinions on enslaved people gaining their freedom by British decree.

The second class of people, for whose sake a few remarks upon this proclamation seem necessary, is the Negroes. They have been flattered with their freedom, if they be able to bear arms, and will spedily join Lord Dunmore's troops. To none then is freedom promised but to such as are able to do Lord Dunmore service: The aged, the infirm, the women and children, are still to remain the property of their masters, masters who will be provoked to severity, should part of their slaves desert them. Lord Dunmore's declaration, therefore, is a cruel declaration to the Negroes. He does not even pretend to make it out of any tenderness to them, but solely on his own account; and should it meet with success, it leaves by far the greater number at the mercy of an enraged and injured people. But should there be any amongst the Negroes weak enough to believe that Dunmore intends to do them a kindness, and wicked enough to provoke the fury of the Americans against their defenceless fathers and mothers, their wives, their women and children, let them only consider the difficulty of effecting their escape, and what they must expect to suffer if they fall into the hands of the Americans. Let them farther consider what must be their fate, should the English prove conquerors in this dispute. If we can judge of the future from the past, it will not be much mended. Long have the Americans, moved by compassion, and actuated by sound policy, endeavoured to stop the progress of slavery. Our Assemblies have repeatedly passed acts laying heavy duties upon imported Negroes, by which they meant altogether to prevent the horrid traffick; but their humane intentions have been as often frustrated by the cruelty and covetousness of a set of English merchants, who prevailed upon the King to repeal our kind and merciful acts, little indeed to the credit of his humanity. Can it then be supposed that the Negroes will be better used by the English, who have always encouraged and upheld this slavery, than by their present masters, who pity their condition, who wish, in general, to make is as easy and comfortable as possible, and who would willingly, were it in their power, or were they permitted, not only prevent any more Negroes from losing their freedom, but restore it to such as have already unhappily lost it. No, the ends of Lord Dunmore and his party being answered, they will either give up the offending Negroes to the rigour of the laws they have broken, or sell them in the West Indies, where every year they sell many thousands of their miserable brethren, to perish either by the inclemency of the weather, or the cruelty of barbarous masters. Be not then, ye Negroes, tempted by this proclamation to ruin yourselves. I have given you a faithful view of what you are to expect; and I declare, before GOD, in doing it, I have considered your welfare, as well as that of the country. Whether you will profit by my advice I cannot tell; but this I know, that whether we suffer or not, if you desert us, you most certainly will. 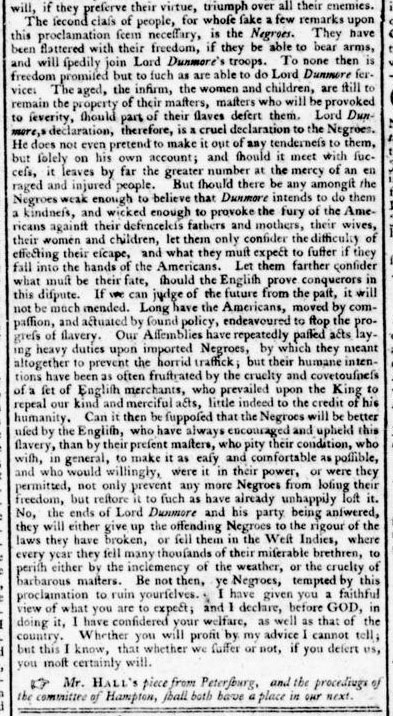 A Virginian Responds to Dunmore's Proclamation, from the Virginia Gazette (Dixon and Hunter), November 25, 1775.