On November 3, 1979, members of the Communist Workers Party (known then as the Worker's Viewpoint Organization) sponsored a rally at Morningside Homes, a housing project in Greensboro. Billed as a "Death to the Klan Rally," the demonstrators gathered to speak out against what they saw as continued racial injustice in North Carolina.

A group of self-proclaimed Klansmen and Nazis attended the rally and fired upon the crowd, killing five people and wounding nine. Much of the violence was captured on film by reporters who were covering the event. 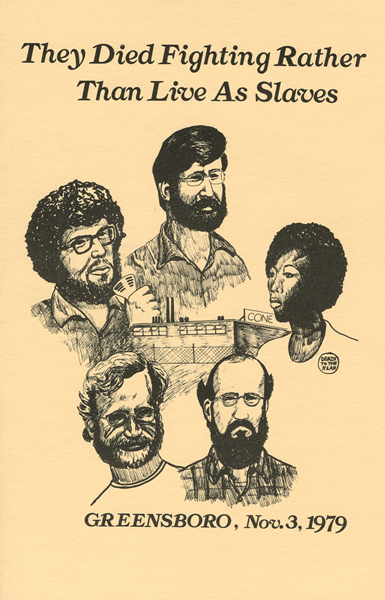 The men accused of firing on the crowd were apprehended and charged with murder. In November 1980 a jury found them not guilty on the grounds of self-defense. After extensive FBI inquiries into the killings, the case was reopened and, in 1983, nine people were indicted for conspiracy to violate the protesters' civil rights. Again, the defendants were acquitted.

In addition to their outrage at the violence in their community, many people in Greensboro blamed the police department for failing to act promptly enough to prevent the killings. The frustration in the community continued to grow as the courts failed to convict anyone for the shootings.

At the twentieth anniversary of the killings in 1999, it was clear that tensions in Greensboro still ran high and that there were many unresolved feelings and accusations surrounding the case. A Truth & Reconciliation Commission, modeled on similar projects in South Africa, was established in 2004. The Commission began holding public hearings on the 1979 killings, operating under the principle that the community cannot begin to heal until the events of the past are honestly and openly confronted. The final report of the Commission is due in 2006.