The Southern Campaign of the American Revolution has often been depicted in literature in a glamorous and romantic fashion, with emphasis on the exploits of native-son militia in each colony. Granted, brave and daring militia leaders played a crucial role in the War for Independence, but they were part of a much larger and oft-neglected drama -- a bloody civil war often pitting neighbor against neighbor -- evident in the South, especially in the Carolina backcountry. The lower South, a region more often associated with the American Civil War of 1860, was ravaged as no other section. The war in the South went far in deciding the final Patriot victory.

The Southern Campaign began with British concern over the course of the war in the North. Failure at Saratoga, fear of French intervention, and over-all failure to bring the rebels to heel persuaded British military strategists to turn their attention to the South. Some in Britain even suggested that New England, that hotbed of sedition, was a lost cause anyway and not worth the effort, temporarily or even permanently. The British did have some success in New Jersey and Pennsylvania, but failed to consolidate their efforts. They appeared, in fact, to lack any over-all strategy to crush the rebels.

Early on, British military strategists saw the South as a Loyalist stronghold. There were the Highland Scots of the Cape Fear Region in North Carolina, strong Anglicans in coastal areas, those with grudges against colonial governments, Indian traders, mercantilists, late-arriving immigrants, and those running from the law -- all having reason to remain loyal to the Crown. The South, however, was more sharply divided than British estimates. The strengthening of Loyalist sentiment and consequent Patriot hostility resurrected age-old animosities and loyalties as regions, individuals, or even families chose sides. Consequently, the war took on the nature of a violent civil war. Raids, murders, and reprisals became the order of the day. Even, at times, families were fractured as members differed over the war. Plantations were plundered and crops, destroyed. With civil government virtually collapsed, violence and hatred grew to the point of hope for victory as the only solution. Forced to choose between collaboration or rebellion, many Americans chose the latter. More and more, guerilla warfare replaced orthodox fighting.

From the beginning, the British were undaunted. With such perceived Loyalist support, British victory over the rebels was to be an easy one -- a quick expedition south to restore the "King's Friends" to power over Patriots who had earlier wrested control from royal governors. With Georgia and South Carolina under firm Loyalist control, red-coated British troops could then subdue North Carolina and Virginia. British General Henry Clinton, in his memoirs, The American Rebellion, stated that the British goal in the South "was to support the Loyalists and restore the authority of the King's government". Intense British political pressure emphasized Loyalist-related strategies as a means of victory. Additionally, some British strategists envisioned a "Chesapeake squeeze" in which British forces in the North would drive south toward Virginia, creating a pincers movement and trapping American forces. The Chesapeake, wrested from American control, would serve as a base for British naval operations.

The British had additional motives for the South. Southern agricultural products -- notably tobacco, rice, and indigo -- were important to British mercantile interests. British strategists saw the Carolinas, Georgia, East Florida, the Bahamas and Bermuda as an important post-war trade grouping and an integral part of the West Indies sugar trade. Savannah and, more importantly, Charleston would fit well into such a grouping. Charleston was coveted, especially, as the most important southern port and the fourth largest and richest city in North America.

The fall of Charleston on May 12, 1780, was perhaps the worst defeat Americans suffered during the entire Revolution. Subsequent British victories at the Waxhaws, Camden, and Fishing Creek eliminated much of the southern Continental army and made the British confident that the South was theirs. Events in the North and South led to a feeling of Patriot desperation by the summer of 1780.

The tide of battle was soon to turn, however, in a sequence of events. First, overmountain men defeated forces under Patrick Ferguson at Kings Mountain on October 7, 1780. General Cornwallis, in command in the South, abruptly stopped his push into North Carolina and fell back to South Carolina to protect its western borders. About the same time, George Washington selected General Nathanael Greene to salvage the situation in the South. Greene, against contemporary military wisdom, split his army so that they could move more widely throughout the Carolinas. Greene's decision to put Daniel Morgan in command of one division led to a Patriot victory at Cowpens, where British losses were staggering: 110 dead, over 200 wounded and 500 captured. Cowpens was followed by a stand-off at Guilford Courthouse where, it is estimated, the British lost one-third of their force and some of their best officers. Siege of the British fort at Ninety Six put additional pressure on the British. Subsequent Cornwallis blunders and British failure to provide naval superiority led to his entrapment and Patriot victory at Yorktown. The blow was decisive; the war was lost, and American forces in the South played a great part in the final victory. Additionally, historians point to numerous militia skirmishes in the backcountry and to Greene's long-term strategy of disrupting British logistics as crucial to final victory.

The Battle of Cowpens, in context of the Southern Campaign, was the turning point of the war in the South. Moreover, it contained the tactical masterpiece of the entire war -- Morgan's unique deployment of troops, including effective use of the militia and maximization of their strengths. Like Kings Mountain before, the victory at Cowpens was decisive and complete. But there was a difference: Kings Mountain had been an important victory over Tories; Cowpens was a victory over crack British regulars. Kings Mountain and Cowpens had both been political and psychological victories for the hearts and minds of the population, in effect blunting recruitment of Loyalists. The Cowpens victory also boosted northern morale, resulting in additional and greatly deserved military assistance for General Greene. These battles stopped a long string of retreats by American forces and initiated a chain of events leading to eventual Patriot victory at Yorktown. In truth, the Revolution was won in the South, and Cowpens played a major role in the victory. 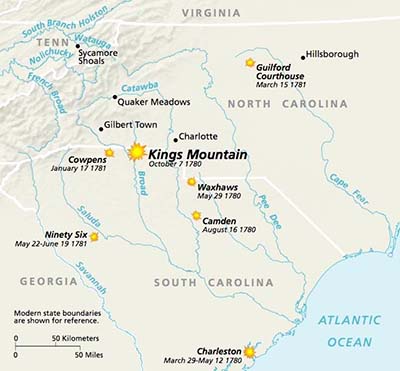 Map illustrating key battles in the Southern Campaign of the War of American Independence, 1780-1781