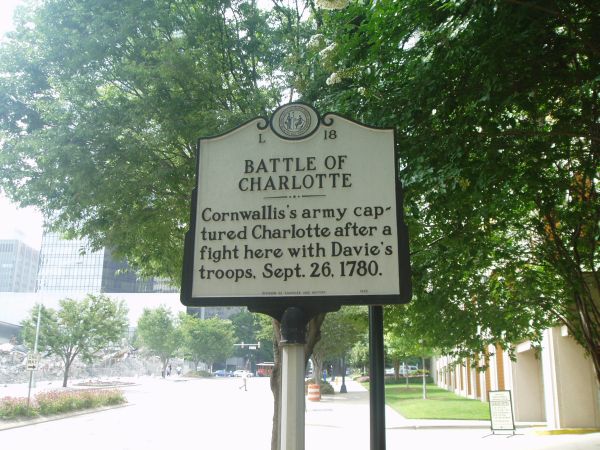 On 26 Sept. 1780 the Revolutionary War battle at Charlotte pitted the British troops of Lord Charles Cornwallis against a greatly outnumbered but surprisingly combative force of North Carolina Patriots. The militia in western North Carolina was commanded by Gen. William Lee Davidson. On encountering the British army, Davidson ordered most of his small force to retreat, sending a detachment under Col. William R. Davie to delay Cornwallis at Charlotte. Davie later wrote that his force of 150 "mounted Infantry and dragoons" was joined by 14 volunteers under Capt. Joseph Graham. (Graham later gave the number of his command as 50.)

Charlotte at that time, as later described by Davie, was a town of "about twenty houses, built on two streets, which cross each other at right angles, at the intersection of which stands the court-house." This is the present intersection of Trade and Tryon Streets, a spot shaded by Charlotte's tallest skyscrapers. The wooden courthouse stood on eight 10-foot-high brick pillars, which were connected by a 3½-foot-high stone wall. The partially enclosed ground floor of the courthouse served as a marketplace. Davie placed "one company" under the courthouse and two more companies 80 yards ahead, under the cover of houses and gardens.

The British cavalry formed a line of battle about 300 yards from Davie's men and charged. As the infamous Col. Banastre Tarleton was "indisposed" from the previous night's march, his men were led by Maj. George Hanger. The Americans held their fire until Hanger's cavalrymen were 60 yards away. The rebel musket fire stunned the British, and Hanger's men reeled back in confusion. Pressure from the British infantry forced Davidson to pull his outlying men into line with the courthouse, but they repelled two more cavalry charges. Despite the failure of the cavalry, the steadier British light infantry pressed the American flanks until Davie began withdrawing his men. Davie's troops moved back stubbornly, covering each other and drawing away in good order.

Graham's men served as the rear guard and skirmished with the British units that pursued them. Four miles from Charlotte, near Sugar Creek Church, the British charged and scattered the rear guard. Graham was critically wounded and Lt. George Locke was killed. After this clash, the British advance force turned back to join the main body of troops at Charlotte. Davie continued to withdraw until his force crossed the Rocky River, 16 miles from Charlotte and 4 miles in front of Davidson's army.

Patriot casualties at Charlotte were given by Davie as "Lt. Locke and 4 privates killed [and] Major Graham and five privates wounded." Davie reported the British losses as "twelve non-commissioned officers killed and wounded; Major Hanger and Captains Campbell and McDonald wounded, with about thirty privates." Two dead British soldiers were reported to have been found near Sugar Creek Church.

The Battle of Charlotte itself was not decisive, but the stubborn resistance of the outnumbered Americans symbolized the resolve of the people of Mecklenburg County and led to the region receiving a famous new nickname. Lord Cornwallis, after 16 humiliating days in the Charlotte area, was heard to say as he prepared to depart: "Let's get out of here; this place is a damned hornet's nest." So honored were Charlotteans with the epithet given to their city by Cornwallis that they adopted it for perpetuity. The official city seal features a hornet's nest, and many local organizations and clubs carry the name. Hornet's Nest Park is located on Beatties Ford Road not far from the battle site, which is marked by a monument and a self-guiding trail.

Great account of Battle of Charlotte. It is regrettable that many North Carolinians and Americans are unaware of the illustrious namesake of both their city's NBA basketball teams (the present Hornets were preceded by another Hornets team which moved to New Orleans). It is wonderful that Lord Cornwalis proclaiming Charlotte to be a "hornets nest" is celebrated still. It is unfortunate that Charlotte's NFL team was unable to incorporate this theme into its name as well.