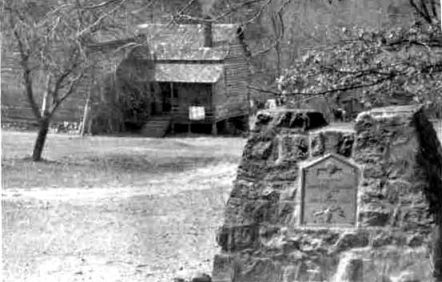 Also known as the Battle of the Bees, the Battle of McIntyre's Farm was a Revolutionary War skirmish fought on 3 October 1780 in Mecklenburg County. When British commander Lord Charles Cornwallis left Charlotte on 12 Oct. 1780 after a 16-day occupation, he was heard to say that the defiant and rebellious town was a "damned hornet's nest." Although the British were figuratively stung by unrelenting hostility and violent ambushes, one foraging party was stung both literally and figuratively (by Patriots and by bees) in the skirmish at McIntyre's Farm.

Cornwallis's supplies at Charlotte were running low, so he ordered Maj. John Doyle to lead a foraging expedition into the surrounding countryside. The British were prepared for trouble; their 40 wagons were accompanied by 450 foot soldiers and a cavalry detachment. As Doyle's force marched up Beattie's Ford Road, they were trailed by 13 Patriots under the command of Capt. James Thompson. Thompson's men kept out of sight as the British halted seven miles from town at McIntyre's farm. There, some of the British remained behind to plunder the farm while Doyle and the rest of the party began to march on.

As some Redcoats loaded wagons with farm produce, other soldiers and their dogs made a great commotion chasing chickens. A British captain in the doorway of the farm's log cabin laughed loudly at the lively scene as his men accidentally turned over a beehive and ran from the enraged bees. As the disorganized British tried to elude the bees, the Patriots fired into them. The laughing British captain, nine men, and two horses were said to have been shot down by the first volley. Because the Patriots fired from cover with great accuracy and constantly shifted their positions, it seemed to the startled Redcoats that they were under attack from a much larger force.

Believing that they were outnumbered, Doyle ordered his men to retreat. Rebel fire killed some of the horses drawing the supply wagons, which blocked the road and added to the confusion. Some British soldiers cut loose uninjured animals and escaped on them. Patriots from the neighborhood sniped at the retreating troops. It seemed to the survivors that "every bush along the road concealed a rebel." Many years later, historian Joseph Graham numbered the British losses as 8 men dead and 12 wounded.

The Battle of McIntyre's Farm was only one of several sharp clashes fought between Cornwallis and local Patriots around Charlotte. The , one of the oldest buildings in Mecklenburg County, still bore bullet holes from the battle when it was demolished in the 1960s. A county historical site, opened in 1976, commemorates the spot.