Ensign Ensign is the lowest rank of officer in the U.S. Navy Worth Bagley, a native of Raleigh, was the only U.S. Navy officer killed in action during the Spanish-American War.

Born in Raleigh in 1874, Bagley graduated from the U.S. Naval Academy in 1895. After serving for two years on the USS Montgomery, Texas, and Maine, he was promoted to ensign on July 1, 1897. In November 1897 he was appointed inspector of the new torpedo boat Winslow. A month later he became the Winslow's executive officer, or second in command, under Lieutenant J. B. Bernadou.

In April 1898, the Winslow was mobilized with the rest of the Atlantic fleet for operations in Cuban waters. On the morning of May 11, the ship went with the Hudson and the Wilmington to force the entrance to the harbor of Cárdenas. She was fired upon by one of several Spanish gunboats, and a battle followed. The Winslow was soon disabled but was hauled out of range of the Spanish guns. Just as the battle ended, Ensign Bagley and four sailors were killed by a shell.

Worth Bagley's brother, David W. Bagley, served in World War I and World War II, retiring in 1947 as an Admiral.

Because he was the only naval officer killed during the war, Worth Bagley received a number of honors.

At the Naval Academy

In 1899, a tablet was laid in his honor in the chapel at the U.S. Naval Academy, as this article from the Baltimore Sun Almanac noted:

"In the chapel of the United States Naval Academy, Annapolis, January 22, 1899, a handsome memorial tablet was unveiled to the memory of Ensign Worth Bagley, United States Navy, the gallant young officer who was the first to fall in the war with Spain. Lieut. J. B. Bernadou, who himself had a narrow escape in the same engagement, withdrew the curtain from the tablet.

"The tablet is of brass, and has a backing of antique oak. The inscriptions and ornamentations are inlaid in brass. Beneath a sword entwined by a palm is the following Inscription:

In Memory of WORTH BAGLEY, Ensign United States Navy,
The First American Officer who Fell In the
Spanish-American War. Killed on Board the Torpedoboat Winslow
During the Bombardment at Cardenas,
May 11, 1898.
"I have fought a good fight. I have
finished my course. I have kept the
faith." -- II Timothy, 4:1.
This Tablet is Erected by
The Officers of the Atlantic Torpedoboat
Flotilla.1

Ensign Bagley was honored in at least one poem, as well: "One Country -- One Sacrifice: Ensign Worth Bagley, May 11, 1898," by Richard Watson Gilder:

In one rich drop of blood, ah, what a sea
Of healing! Thou, sweet boy, wert first to fall
In our new war; and thou wert southron all!
There is no North, no South, -- remembering thee.2 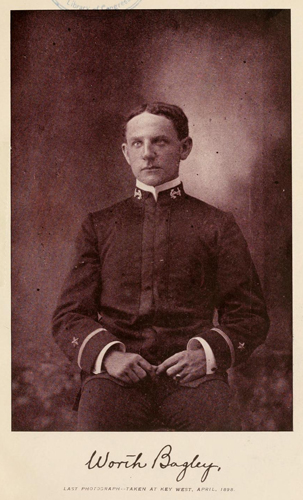 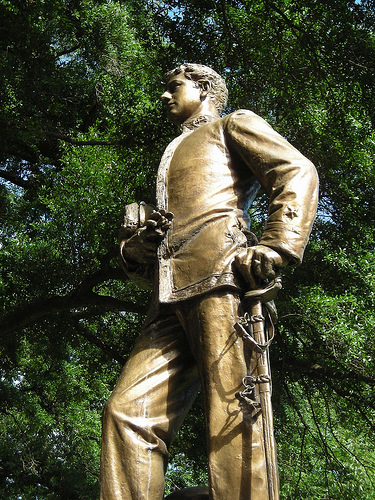 This statue of Worth Bagley stands in front of the State Capitol in Raleigh.