In North Carolina, as in other states, the decades after the Civil War witnessed a dramatic rise in the number of patent medicines that were sold in general stores, by pitchmen from wagons, and through mail orders. Many of these concoctions promoted themselves as "surefired" cures for illnesses ranging from deadly cancers to the common cold. While the curative claims of these nostrums were usually bogus, their widespread promotion in newspapers and through colorful signage established mass-marketing strategies that continue in American advertising to this day.

Patent medicine generally categorizes the assorted tonics, pills, ointments, powders, and other compounds that in the 1800s and early 1900s were widely sold. Although many of the names and label designs of these dubious mixtures were trademarked, very few of the "medicines" were ever officially patented by the federal government and had their ingredients and their alleged health benefits recorded in Washington, D.C.

Log cabin pharmacy, 1910
Introducing modern medicines to the backwoods of North Carolina and coaxing residents away from their homemade remedies were no easy tasks, especially for a woman in the early 1900s. Shown here is one of the first pharmacies in Henderson County. Located between Edneyville and Bat Cave, it was operated by Dorothy Sharpe, who is standing at the right in the photograph.

Turpentine, Kerosene, & Vinegar
"Folk medicine," like patent medicine, should not be dismissed or categorized entirely as quackery, although there were many outlandish treatments that mountain folk used to combat diseases and relieve their aches and pains. Turpentine, kerosene, and vinegar served often as bases in homemade liniments and tonics. Among the many remedies documented in this book is one for headaches:

[B]elieving that a headache was caused by an excessive flow of blood to the head, some residents tied a rag or bandanna (some believed it must be red) tightly around the head to curtail blood flow. More often than not, the rag was soaked in turpentine, camphor, or vinegar.

The "curing powers" of tobacco
While various cancers, emphysema, and other deadly illnesses are well documented and firmly linked to tobacco, for over four centuries smoking and chewing the "weed" were widely regarded and promoted as beneficial to one's health. In the 1500s, Spanish and English doctors routinely prescribed the smoking of tobago (a Native American term) for patients who suffered respiratory problems, serving as an aid to "expunge" congested lungs. In the 1934 advertisement (at left) smoking is touted as a provider of "well being" and reliable dispenser of "vim and energy." "I have also learned," professes writer Rex Beach in this testimonial, "that Camels do not interfere with healthy nerves."

Judging by the number of medications that have originated in North Carolina for indigestion and headaches, our Tar Heel ancestors must have suffered mightily from "sour stomachs" and chronic head pain. Products such as Bromo Seltzer, Vick's VapoRub, and numerous heachache powders, including Goody's, Stanback, and B.C., have their origins in this state. Even Pepsi-Cola originally sold in New Bern, N.C., as "Brad's Drink" was marketed in the 1890s as a cure for dyspepsia (upset stomachs).

Vick's Vaporub
A popular remedy for the common cold and congestion, "Vick's VapoRub" was invented by Lunsford Richardson (1854-1919), a drug-store owner in Selma, N.C. This ointment is composed principally of camphor and menthol, an ingredient derived from mint and other plants. In 1898, Richardson named his "home-brewed" product after his brother-in-law Vick.

"Fat as a butterball"
Invented by New Bern druggist Caleb Bradham in the 1890s, Pepsi-Cola continues to be marketed today with the slogan "Born in the Carolinas." This book examines in detail the history of this refreshment, which was originally sold as a remedy for upset stomachs under the name "Brad's Drink." In 1897, the beverage was renamed Pepsi-Cola to underscore one of its ingredients, pepsin, an enzyme that aids digestion. The Pepsi-Cola Company also touted the benefits of having babies drink their product. The circa-1905 letter from the bottling works in New Bern encourages mothers to have their babies drink Pepsi. It ems the example of little Emma Woodley, an eight-month-old girl who it claims had grown healthy and "fat as a butterball" enjoying Pepsi everyday.

Mass-marketing relief
An advertisement for "Stanback's Headache Powders" dominates the background of this photograph of a parade in downtown Spencer, N.C., during the 1920s. Widely accessible medicine was important to people.

Bromo-Seltzer
Since it was first formulated in 1888, Bromo-Seltzer is still widely marketed as a liquid remedy for both headaches and indigestion. The blue Bromo-Seltzer bottle is the type of container in which the product was sold between 1890 and 1930. The medication's inventor, Isaac Edward Emerson, was a native of Chapel Hill and an 1879 graduate of the University of North Carolina at Chapel Hill. In 1881, he moved to Maryland, where he became a multi-millionaire selling Bromo-Seltzer and other remedies developed by his Emerson Drug Corporation. Later he shared some of his wealth with his alma mater. In 1914, Emerson donated $26,000 to the University to fund the construction of a needed athletic field for baseball and football. Named in his honor, Emerson Field continues to serve the campus as an all-purpose site for intramural sports and other student athletic activities.

from Digital Public Library of America 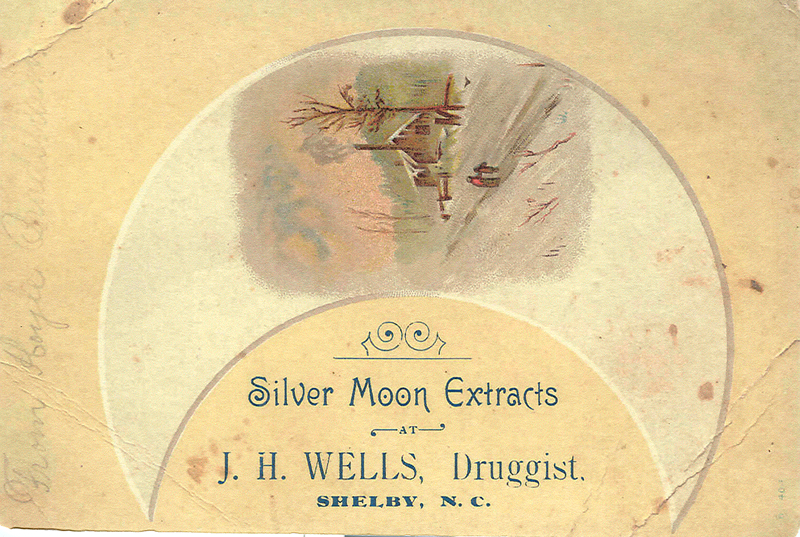 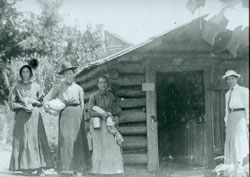 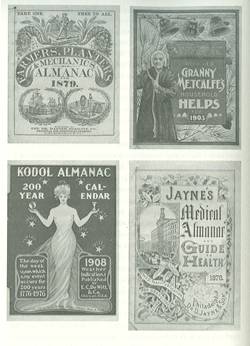 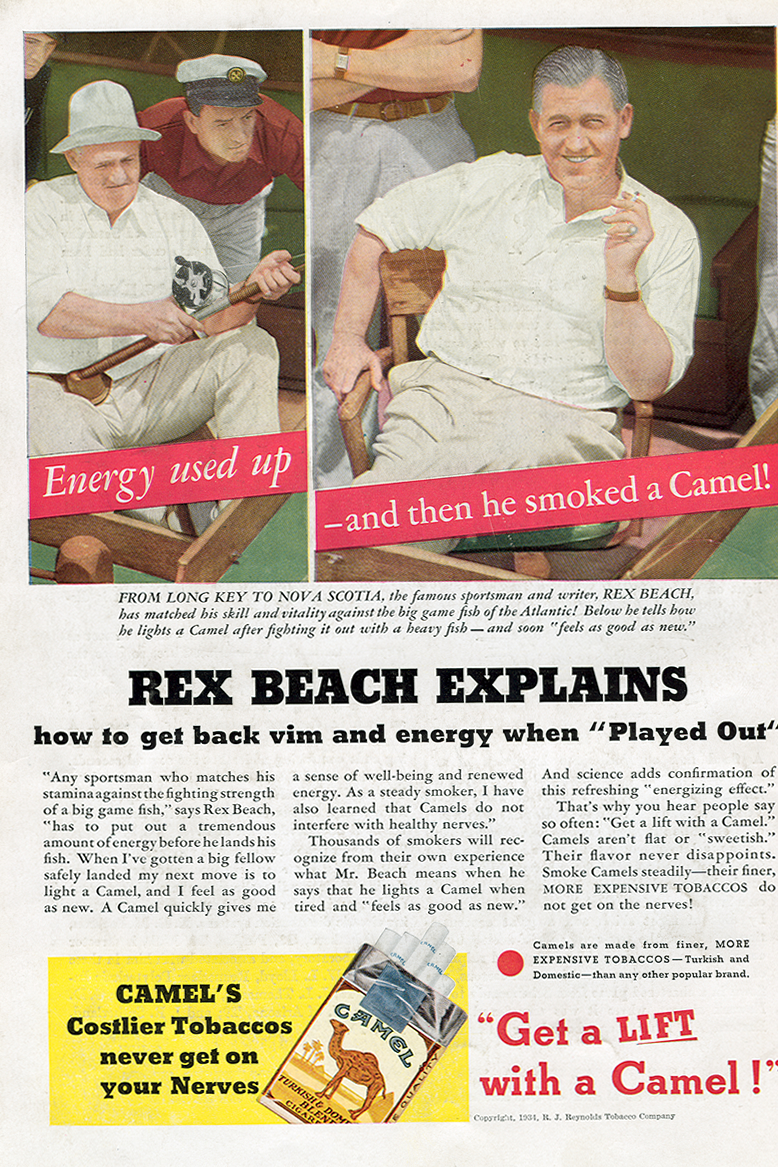 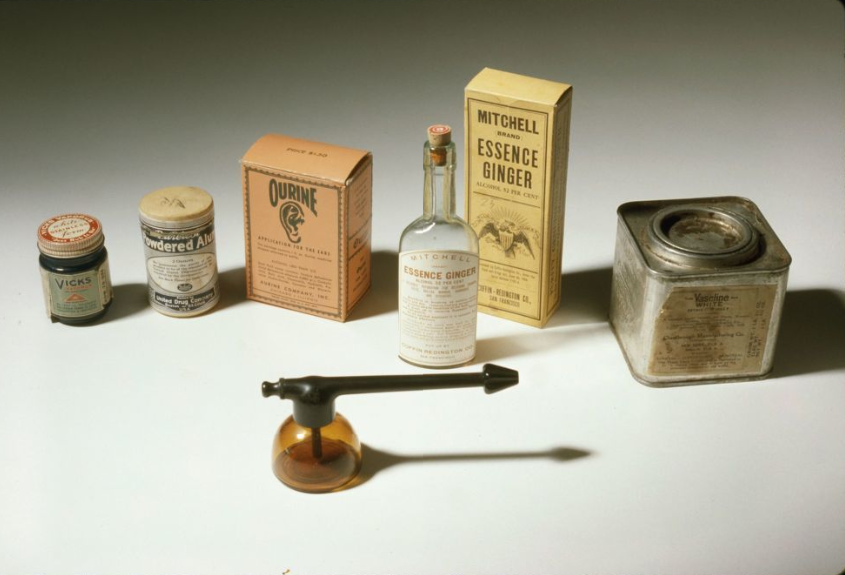 Assorted medicinal containers from 1910. Among them is a Vick's Vaporub container. 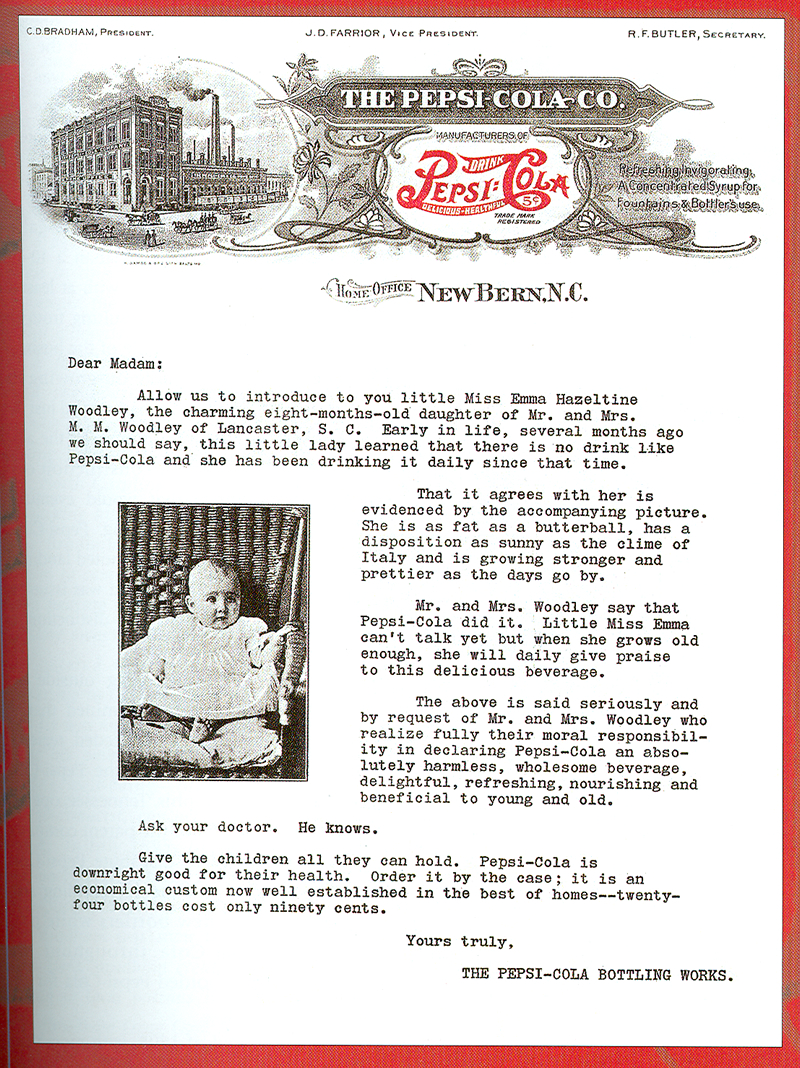 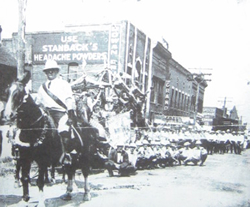 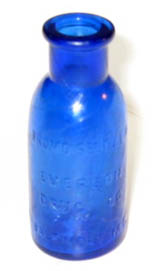