The Road to the First Flight

In 1903, Wilbur and Orville Wright, two brothers from Dayton, Ohio, became the first people to fly a heavier-than-air, power-controlled machine, known as the Wright Flyer. This did not simply happen overnight. The brothers had been tinkering with the idea of flight off and on since childhood. They were mechanically inclined young men who were inspired by the efforts of others.

In 1878, the brothers’ father, Milton Wright, brought home a rubber band powered toy helicopter. Designed by French aeronautical experimenter Alphonse Pénaud, this toy did not simply fall to the ground as expected. Rather it "flew across the room till it struck the ceiling, where it fluttered awhile, and finally sank to the floor." Though the fragile toy soon broke, Wilbur and Orville never forgot it. They even attempted to build their own toy helicopters. In later years, Orville accredited this childhood toy as being the object that sparked their interest in flight.

Throughout their lives, the brothers were involved in a variety of ventures to make money. But it wasn’t until 1892, when they formed the Wright Cycle Company to sell bicycles, that they found a successful business that also allowed them spare time for other projects. With the business doing rather well, the brothers also opened a repair shop and later began to manufacture bicycles.

Though the business was going well, the brothers were restless. Their energies were focused by two events of 1896; the death of Otto Lilienthal, the celebrated glider experimenter, in a flying accident, and the successful unmanned launching of powered models by Samuel Langley. The creativity and ingenuity of these two men were well and truly captured. Fortunately, the bicycle business provided the funds for this new interest, for unlike others in aviation, the Wrights were never financed by anyone. Furthermore, the repair and manufacture of bicycles sharpened the brothers' mechanical skills. In their construction of flying machines, Wilbur and Orville often used the same equipment and tools used in repairing bicycles. They conducted many of their scientific experiments in the backroom of their shop and most of the parts used in the first successful airplane were built there.

The Wrights' serious work in aviation began in 1899 when Wilbur wrote the Smithsonian for literature. Dismayed that so many great minds had made so little progress, the brothers were also exhilarated by the realization that they had as much chance as anyone of succeeding. Wilbur took the lead in the early stages of their work to solve the problems of flight, but Orville was soon drawn in as an equal collaborator. They quickly developed their own theories and, for the next four years, devoted themselves to the goal of human flight.

The brothers knew that the solutions to lift and propulsion needed only refining, but no one had achieved lateral control. Rejecting the principle of inherent stability -- the conventional wisdom -- they wanted control to depend on the pilot. Wilbur hit upon the idea of warping the wings -- sparked by his observation of birds and the idle twisting of a box -- to rotate the wings and stabilize flight. They tested wing-warping -- the forerunner of ailerons -- on a 5-foot biplane kite.

With the success of their kite, the brothers soon realized that weather conditions in Dayton were not suitable for extensive flying experiments. They wrote the National Weather Bureau in Washington, D.C., requesting a list of places on the east coast where the winds were constant.

In a letter dated May 13, 1900, addressed to Octave Chanute, an experienced engineer and a worldwide authority on flight at the time, Wilbur Wright wrote:


For some years I have been afflicted with the belief that flight is possible to man. My disease has increased in severity and I feel that it will soon cost me an increased amount of money if not my life. I have been trying to arrange my affairs in such a way that I can devote my entire time for a few months to experiment in this field.

Confident their design was sound, the Wrights built a 17-foot glider with an unusual forward elevator. They went to Kitty Hawk, North Carolina, hoping to gain flying experience, but the wings generated less lift than expected, and they flew the glider mostly as a kite, working the control surfaces from the ground. Wilbur's time aloft in free flight totaled only 10 seconds. They went home somewhat discouraged, but convinced they had achieved lateral and longitudinal control.

This was the year the Wrights sharpened their focus. Trying to overcome the lift problem, they increased the camber of the 1901 glider. They also lengthened its wingspan to 22 feet, making it the largest glider anyone had attempted to fly. But at their new Kill Devil Hills camp, lift was still only a third of that predicted by the Lilienthal data upon which the wing design was based. And the glider pitched wildly, climbing into stalls. When they returned to the earlier camber, they achieved longitudinal control and eventually glided 335 feet. But the machine was still unpredictable. When the pilot raised the left wing to initiate the expected right turn, the machine instead tended to slip to the left (adverse yaw). This failure, and the realization that their work had relied on false data, brought them to the point of quitting. Instead, they built a wind tunnel and produced their own data.

The 1902 machine embodies the Wrights' research. They gave it efficient 32-foot wings and added vertical tails to counteract adverse yaw. The pilot moved a hip cradle to warp the wings. Some 400 glides proved the design workable, but still flawed. Sometimes, when the pilot tried to raise the lowered wing to come out of a turn, the machine instead slid sideways toward the wing and spun into the ground. Orville suggested a movable tail to counteract this tendency. After Wilbur thought to link the tail movement to the warping mechanism, the plane could be turned and stabilized smoothly. If others had thought about steering at all, it was by rudder -- a marine analogy unworkable in the air. The Wrights saw that control and stability were related, that a plane turned by rolling. Six hundred more glides that year satisfied them that they had the first working airplane. In 1903, they would prove it.

1903: Twelve seconds that changed the world

The brothers were dressed in coats and ties that December morning -- a touch of private ceremony for an event that would alter the world. The pools around their camp were icing up, and the break in the weather might be their last chance of the season. Words were impossible over the engine's roar, so they shook hands and Orville positioned himself on the flyer. Then, on a remote, sandy beach, in the year 1903, he broke our bond to the earth. He flew. It lasted only 12 seconds, and the distance of the flight was less than the length of an airliner. But for the first time, a manned, heavier-than-air machine left the ground by its own power, moved forward under control without losing speed, and landed on a point as high as that from which it started. Within two generations we had taken to the air for routine travel, seen an aircraft break the sound barrier, and watched a man walk on the moon. 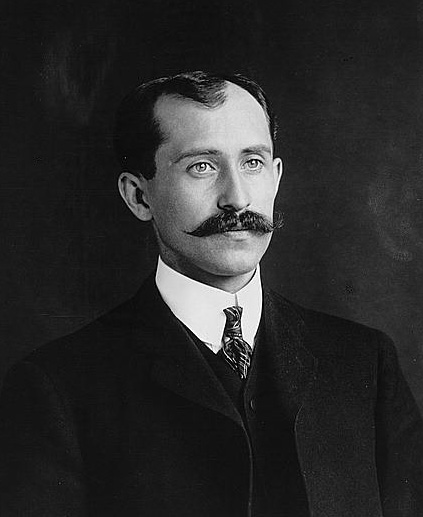 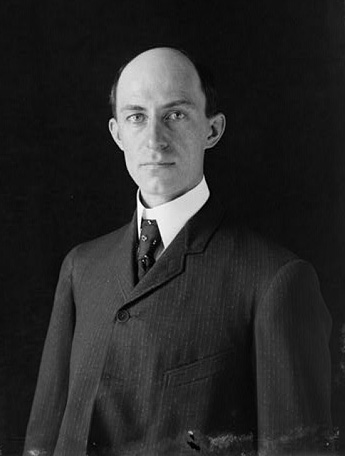 Wilbur Wright. He and his brother, Orville, were the first men to pilot a heavier-than-air machine that took off on its own power, remained under control, and sustained flight. 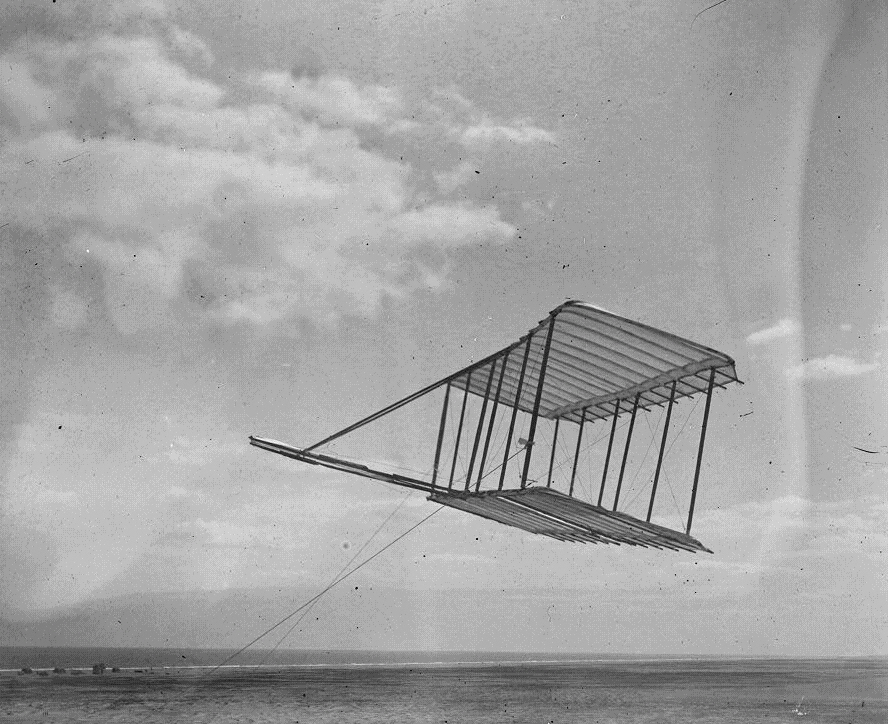 The Wright brothers’ first glider, flown at Kitty Hawk in 1900. 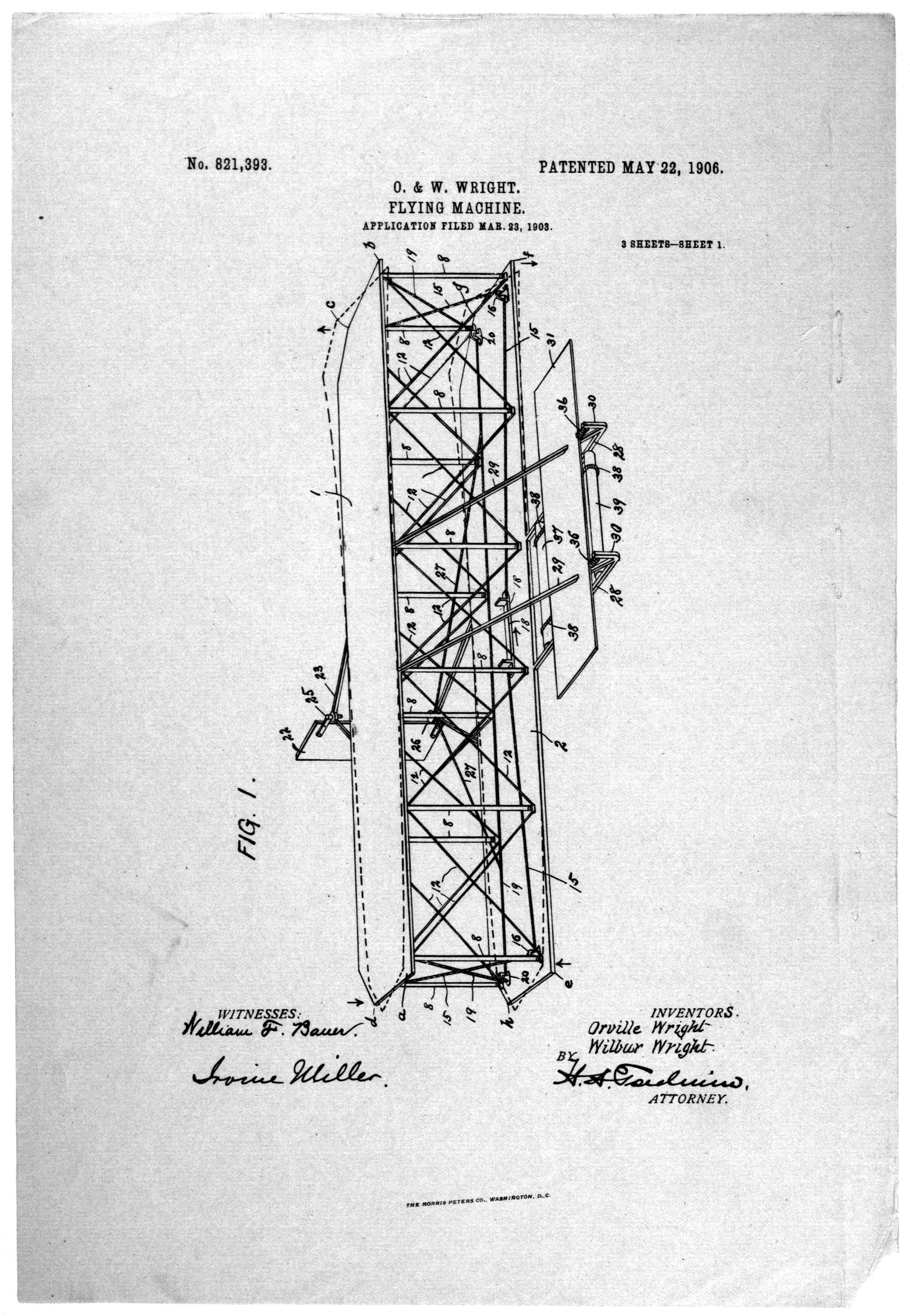 Diagram from the Wright brothers' patent application for a "flying machine," filed March 23, 1903. 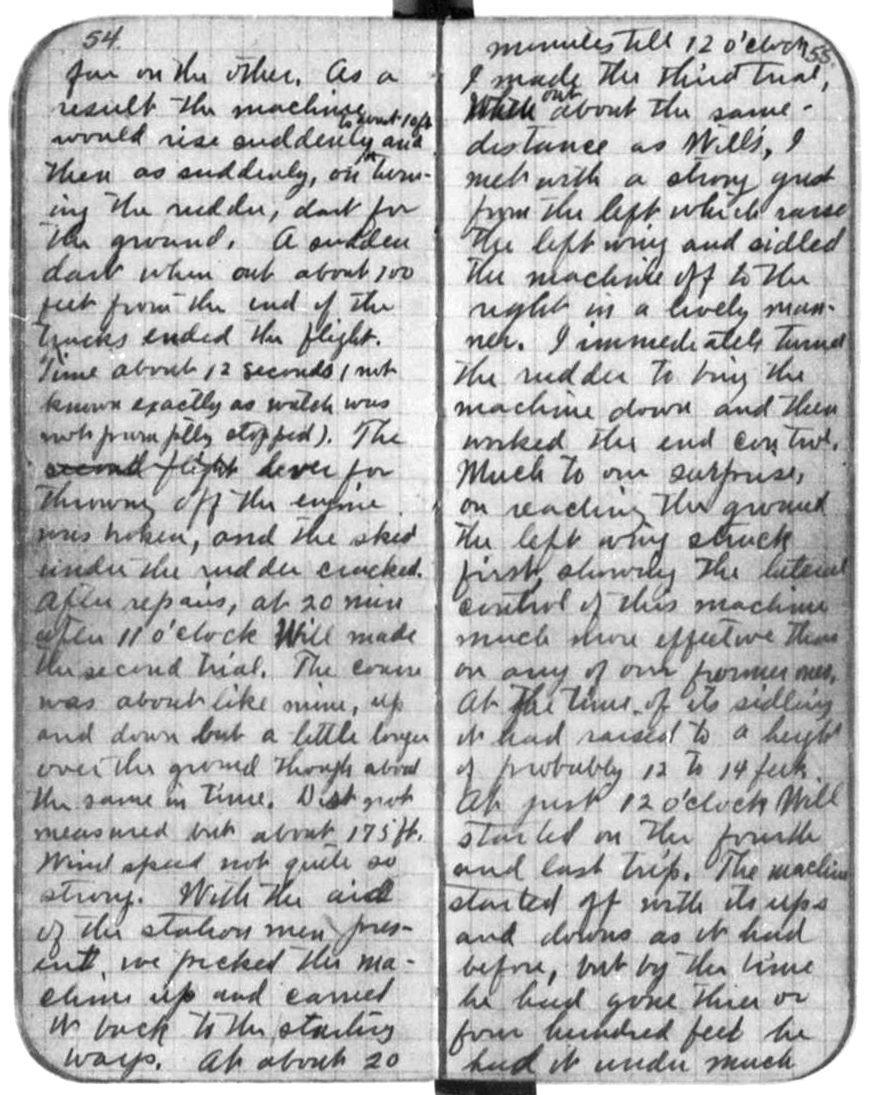