On May 31, 1775, a committee led by Thomas Polk met at the Mecklenburg County Courthouse, in the heart of Charlotte at present-day Trade and Tryon Streets, to adopt the Mecklenburg Resolves.  The Resolves were a radical set of resolutions, denying the authority of Parliament over the colonies and investing that power in the Provincial Congress, meeting that same week in New Bern.

In the absence of an operational new government, the Resolves set up some basic tenets, or principles. These included a statement that anyone who received or exercised a commission from the Crown was deemed an “enemy to his country” and subject to arrest. The county’s militia companies were ordered to arm themselves and maintain vigilance.

The Mecklenburg Resolves were published in full in the North-Carolina Gazette in June 1775, and received wide circulation. The Gazette was North Carolina's first newspaper and published in New Bern.

Others took notice of the Mecklenburg Resolves, and similar resolves were adopted in Wilmington on June 19, in Fayetteville on June 30 and in Pitt County on July 1 of the same year, 1775.

Transcription of the Mecklenburg Resolves, as published in the North-Carolina Gazette (New Bern) on June 6, 1775:

Charlotte Town, Mecklenburg County, May 31. This Day the Committee Met, and passed the following RESOLVES:

Whereas by an Address presented to his Majesty by both Houses of Parliament in February last, the American Colonies are declared to be in a State of actual Rebelion, we conceive that all Laws and Commissions confirmed by, or derived from the Authority of the King or Parliament, are annulled and vacated, and the former civil Constitution of these Colonies for the present wholly suspended. To provide in some Degree for the Exigencies of the County in the present alarming Period, we deem it proper and necessary to pass the following Resolves, viz. 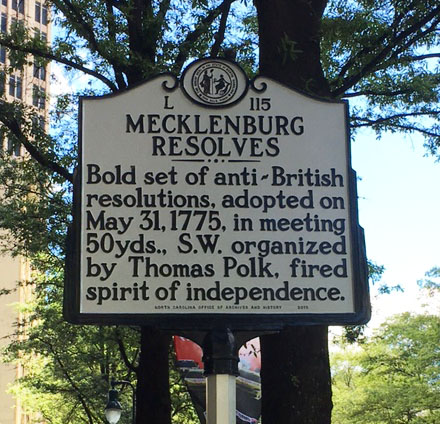 The Mecklenburg Resolves were drafted in Charlotte,
N.C. at the intersection of present day Trade and Tryon Streets 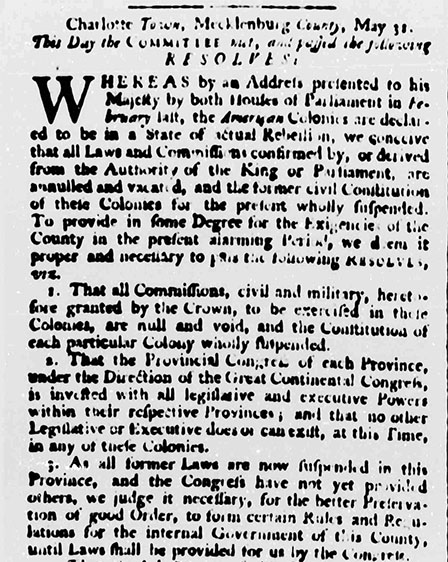 Excerpt of the "Resolves" published in the "North-Carolina Gazette" on June 6, 1775. The Resolves were drafted by a committee of revolutionaries from the North Carolina backcountry when they met in Charlotte on May 31, 1775.