In general, during the late nineteenth and early twentieth centuries, only those who could not afford health care in their homes went to the hospital. Doctors and nurses made regular, sometimes-extended visits to private residences in order to examine, treat, and offer support to patients and their families. Hospitals of that time were places where the indigent who suffered from serious illness could go for medical care. Winston-Salem’s earliest hospitals were established for this purpose. Though most of these hospitals no longer exist, an unpublished "Tour" prepared by Dr. Robert W. Prichard in 1981, provides information about some of them.

In 1887, Rev. Henry O. Lacy, rector of St. Paul’s Episcopal Church, suggested that a hospital be founded to address the health care needs of the growing city of Winston. The Ladies Twin-City Hospital Association, a group of volunteers, took up Rev. Lacy’s cause and began making plans. Within six months, the women opened a hospital inside the Martin Grogan home on North Liberty Street, where up to 10 patients could be hospitalized for $5 a week. Mr. Grogan was Mayor of Winston from 1887-1888. To continue the project the women went door-to-door, meeting-to-meeting, raising money from anyone who would give them a contribution. The mayors of both Winston and Salem were each asked to give $12 a month toward the effort. Through this collaboration, the first Twin-City hospital was sustained for three years until it closed in 1891 due to lack of funds.

The women of the Ladies Twin-City Hospital Association stepped up their fundraising efforts by showing people in the two towns how they had used donations in the past and how many people had been helped. They raised $5,000 and opened the second Twin-City Hospital in 1895 on Brookstown Avenue. It could accommodate nineteen patients. Four days after the hospital opened, a patient with gallstones was admitted.

In 1901, Twin-City Hospital on Brookstown started a nurses training program. By the time this hospital closed, it had added a maternity ward in a separate building and a children’s ward. Both the first hospital on Liberty Street and the second on Brookstown Avenue served indigent white people or poor newcomers. Slater Hospital was established for African Americans in 1902, and it has a story of its own. After Slater Hospital closed in 1912, however, a few African Americans were admitted to Twin-City Hospital. On November 4, 1914, Twin-City hospital transferred its patients to the brand new City Memorial Hospital and closed its doors.

A number of small, temporary hospitals cared for patients who were victims of epidemics that periodically plagued the city. During the flu epidemics of 1918, 1919, and 1920, poor people who fell ill were cared for at the A. Clint Miller home at Fifth and Summit Streets, at the J. W. Hanes home on Fourth Street, at the Depot Street School, and at a house on Maple Street owned by Charles H. Jones, a prominent African-American business man.

Dr. C. S. Lawrence opened a 56-bed hospital, Lawrence Hospital, at Seventh and Oak Streets in 1920. It served whites and a few African Americans until it closed in 1933. Dr. Lawrence’s handsome building was converted into apartments after his death and later sold to the Rescue Mission.

Knollwood Hall, later a nursing home, was originally a $250,000.00 tuberculosis hospital for white patients. In 1939, the Bowman Gray, Jr. family built a new facility on the same campus for African American tuberculosis victims. Knollwood Hall ceased to be a hospital in 1955 when the state took over responsibility for tuberculosis patients.

Reynolds family philanthropy also included health care for the marginalized. The Kate Bitting Reynolds Hospital for African Americans opened in 1938 with one hundred beds. In 1941, ninety more beds were added, and it became the third largest hospital for African Americans in the United States. The “Katie B.”provided care for thirty-two years until Reynolds Memorial/Reynolds Health Center replaced it in 1970.

Returning to the history of Winston-Salem’s public hospital, as mentioned above, a "New" Twin-City Hospital opened in 1914. With initial funding raised in a bond issue, the city purchased a five-acre site for the new hospital from R. J. Reynolds for $5,000.00. Initially, the new hospital had eighty-five beds. In 1921, it was renamed "City Memorial Hospital", and the hospital kept that name held until it closed in 1964. When it closed, City Memorial had 300 beds and 55 bassinets.

As medical knowledge and treatment technologies expanded in the twentieth century, hospitals began to attract people of all economic levels. North Carolina Baptist Hospital, founded in 1923, and Forsyth Memorial Hospital, opened in 1964 as the successor to City Memorial, provide high-tech medical care to residents of Winston-Salem and beyond.

indigent who suffered from serious illness could go for medical care. Winston-Salem’s earliest hospitals were established for this purpose." data-share-imageurl=""> 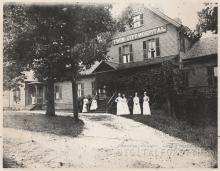 Nurses stand in front of the Twin City Hospital on Brookstown Avenue, 1895.