The Struggle for Voting Rights

Court decisions and civil rights statutes were crucial tools in establishing, protecting, and enforcing the civil rights of African Americans. The surest way to guarantee the permanence of these rights, however, was to empower blacks politically to assert themselves as full participants in the democratic system. The right to vote, then, was arguably the most fundamental right of all, and one that, practically speaking, African Americans in the South had not enjoyed since the failure of Reconstruction.

Looking back, after the withdrawal of northern armies from the South in 1877, white southern elites re-imposed their political dominance. Suppressing the African-American vote was crucial to this objective and was achieved by a number of methods. At first, raw violence was the preferred tool. A number of other practices developed.

One such practice was the “poll tax.” This was a special tax levied equally on every member of a community. Citizens who failed to pay were deemed ineligible to vote. Many southern states introduced poll taxes between 1889 and 1910. Given the extent of African-American poverty, the poll tax disenfranchised large numbers of black voters, and poor whites as well. The Twenty-Fourth Amendment to the U.S. Constitution (1964) prohibited denying any citizen the right to vote in an election for federal office for failure to pay a poll tax. A Supreme Court decision two years later extended this prohibition to state and local elections.

Another practice was the “literacy requirement” for voter registration. Highly subjective oral and written examinations nearly always were applied with special vigor to African-American applicants. Some states would not even permit an applicant to take the examination unless an already-registered voter would vouch for him or her. It was nearly impossible for many black applicants even to take the test, since there were very few African Americans on the southern voting rolls, and few southern whites would risk social ostracism or worse to vouch-in a prospective black voter. The examination was often blatantly unfair. It might require an applicant to write out a passage from the Constitution as dictated by the county registrar — dictated clearly to white applicants, mumbled to blacks.

Southern election officials adopted any number of tactics to prevent black applicants from qualifying. In Alabama, for instance, the decision whether an applicant passed or failed was made in secret, and there was no method for challenging the decisions. Not surprisingly, at least one Alabama board of registrars “qualified” each and every white applicant and not a single black.

Whatever tactic was employed, the threat of violence always lurked in the background. Election officials might publish in local newspapers the names of black voter applicants. This alerted local white Citizens Councils and Ku Klux Klan chapters to blacks who might need to be “persuaded” to withdraw their applications.

Against this background of violent intimidation, activists from the Student Nonviolent Coordinating Committee and the Congress of Racial Equality, among others, launched voter registration campaigns in rural and heavily black parts of the Deep South in 1961. The work took incredible courage. As an early volunteer, the plantation worker Fannie Lou Hamer, memorably explained: “I guess if I’d had any sense, I’d have been scared — but what was the point of being scared? The only thing they [white people] could do was kill me, and it seemed they’d been trying to do that a little at a time since I could remember.”

In 1964, the Southern Christian Leadership Conference, the Congress of Racial Equality, the National Association for the Advancement of Colored People, and the Student Nonviolent Coordinating Committee launched the “Freedom Summer.” More than 1,000 northern whites, mostly college students, volunteered to travel to Mississippi and help black voters register. Their presence also was intended to draw national attention to the violent suppression of black voting rights. 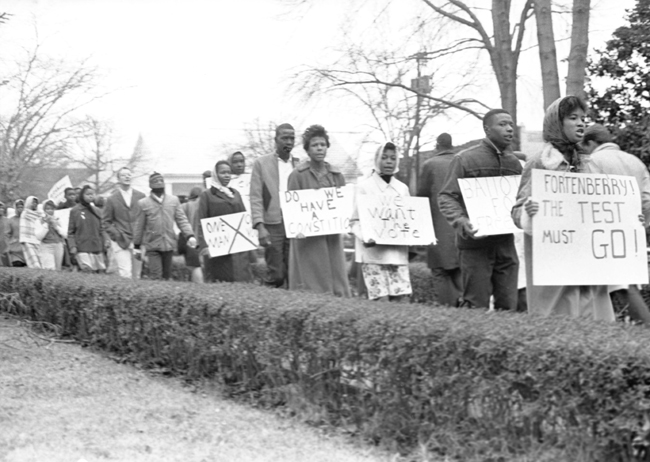 Men and women in McComb, Mississippi demonstrate for voting rights in 1962. Some hold picket signs.